On August 17, 2014, hundreds of people protested outside the wedding of Morel Malka, a Jewish woman who converted to Islam, and Mahmoud Mansour, an Israeli Arab, following calls by the Lehava NGO to oppose the marriage. The next morning, Rabbi Dr. Benjamin Lau shared the following thoughts on the tension between Judaism and democracy in this case. 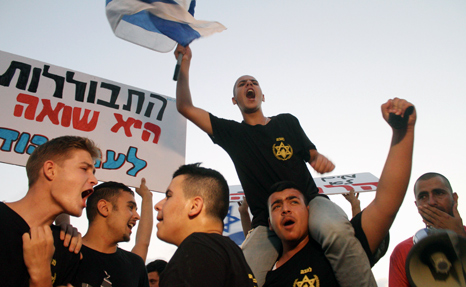 At the start of her book Australian Wedding, Nava Semel describes her experience traveling to Australia to meet the family of her son's girlfriend. She is accompanied on the flight by the voice of her mother, who takes leave of the author with the words: "For this I survived Auschwitz? So that I could have non-Jewish grandchildren?"

The voice of Nava Semel's mother accompanied her (and me, as the reader) throughout the book. The wedding ultimately does not take place, but by the end of the book Semel has undergone a process and has become attached to the family and to the prospective bride—a lovely girl, with kind, deep eyes, for whom the tension surrounding Jewish genomes is foreign and who is removed from the emotionally charged statement of the author’s mother.

Some people see such unions as a sign of becoming "normal." Others call them "mixed marriage." Still others refer to them as "assimilation."

According to Prof. Haim Hillel Ben-Sasson, assimilation is "a universal human phenomenon... It is a psychological-cultural process and a social phenomenon. It is the transition of an individual or group of individuals from identification with one cultural, social, national, or religious unit to identification with another unit." (Continuity and Change: Studies in the History of Israel in the Middle Ages and in Modern Times, Am Oved, 1984, p. 53)

The Zionist movement saw the return to Zion as part of the struggle to maintain Jewish identity and prevent assimilation. For most members of the movement, observance of the commandments was seen as unnecessary excess baggage, because the very existence of a Jewish national homeland was supposed to protect against assimilation.

Last night's wedding between an Israeli Arab man and a Jewish woman who converted to Islam clearly touched a raw nerve regarding attitudes toward intermarriage in Israeli society.  The tension that arose in this case is not just halakhic; it touches on the self identity of the majority society in the State of Israel, the nation state of the Jewish people. Most citizens of Israel, who are not religious and whose do not live according to Jewish law, are not comfortable with intermarriage. According to pure liberalism, there are no grounds for objecting to this type of marriage whatsoever. But my self-identity, which combines the fact of my Jewishness with the fact of my humanity, makes me uncomfortable and uneasy when it comes to the possible assimilation of my children or grandchildren.

The voiceover that Nava Semel hears connects the experience of Jewish survival of the Holocaust with the experience of Jewish identity in the State of Israel. Her mother expresses a sense of "Jewish destiny" that wants to preserve our umbilical connection to the Judaism that we left in Europe. Nava Semel's narrative, in contrast, is a very different narrative. She gives voice to the thoughts of a native Israeli who was an integral part of Israel's cultural revolution. She wants to be enlightened and to accept her son's choice with equanimity, but throughout the book, she is plagued by discomfort at the loss of the intimate Jewish connection.

For the religious community, there is no question. Assimilation is assimilation. Period. As Tevye the Milkman said in Fiddler on the Roof in response to his daughter's choice to marry a non-Jewish man: "On the other hand… No. There is no other hand!" An Orthodox Jew does not recognize another side of the issue when it comes to choosing a mate from outside of the family of Israel. The choice to assimilate removes a person from the family. But despite this, Jewish tradition continues to define the assimilated member of the family as part of "Israel." As the Talmud says, "even though he has sinned, he is still a Jew." This is why Jewish organizations have been established to save Jewish girls and to remove them from the non-Jewish families that have taken them in. In this spirit, former MK Michael Ben-Ari said at yesterday's demonstration: "Morel Malka is our sister. We came to save our sister."

I understand this argument, but at the same time, I find it frightening. In the name of protecting his sister, Michael Ben-Ari is prepared to burn down the shared family home. Contempt for the word "democracy" leads some members of the religious community (admittedly few) to light fires anywhere they see a reality that does not fit the spirit of Israel.

The disruption of yesterday's mixed marriage admittedly did not break the law. The hundreds of people who arrived in response to the call from the Lehava anti-assimilation organization received permission to protest from the state. But the thought that I am allowed to interfere with the personal autonomy of an individual who I believe is diverging from the code that I see as appropriate for life is a destructive thought. It makes the Torah incompatible with life in a country that has a Basic Law protecting human dignity and freedom. Whoever creates a state of mind in which the Torah and the law cannot coexist plays into the hands of the greatest enemies of the Torah. An unusual coalition has been formed between people who are ostensibly acting on behalf of the Torah and people who despise Torah and see it as archaic and unenlightened. This combination connects two extremes and circumvents the majority society in Israel, which sees itself somewhere on an axis that reflects the spectrum between secular and religious.

Is there really anyone who thinks that our common home will be built through burning zeal and fervent hatred of the Other? This summer has been a time of extreme stress. Most of it was met with a great deal of internal solidarity and fraternity. The families that I met when making condolence calls and hospital visits this summer to all sectors of Israeli society did not express this kind of hatred and fanaticism. They were Jews with strong backbones, who wish to see a Jewish society of justice and charity here in Israel. We should focus on what is most essential rather than allowing the fringes to dominate public discourse. The home that we have is too precious and we have not been given the freedom of abdicating our responsibility to protect it.