If public opinion polls are accurate and the election forecasts are correct, the upcoming Knesset will have a record number of women MKs. Nonetheless, the percentage of women in the Knesset is lower than that found in the parliaments of most other established democracies. IDI researcher Dr. Ofer Kenig provides an overview of the situation.

In early 2012, MK Zehava Gal-On was chosen as the leader of Meretz. With Gal-On's election, three Israeli parties were headed by women, as she joined MK Tzipi Livni, then head of Kadima and the leader of the opposition, and MK Shelly Yachimovich, head of the Labor Party. At that time, the number of women in the Knesset reached an all-time high of 24. The Israeli Supreme Court was also headed by a woman—Justice Dorit Beinisch—at that time, and a few months earlier, Orna Barbivai had been appointed head of the Manpower Directorate of the Israel Defense Forces and had become the first woman to attain the rank of Aluf (Major General, the second highest rank in the Israeli army). Taken together, these facts indicate an impressive improvement in the representation of women in key leadership positions. Nonetheless, there is still a long way to go until there is equal representation in Israel's upper echelons, with women and men represented in a manner that is proportionate to their relative numbers in the population.

On one hand, the State of Israel can be proud of its integration of women in political life. Women have had the right to vote in Israel ever since the very first elections for the Assembly of Representatives in 1920, one of the earliest cases of women's suffrage in the world. While women in the United States received the right to vote during that same year, women in Spain and Portugal did not receive the vote until the early 1930s, women in France and Italy were not able to vote until the 1940s, and women in Switzerland only gained suffrage in 1971. The State of Israel is also one of the first democracies in which a woman reached the highest office: when Golda Meir was appointed prime minister in 1969, she was the third woman in history to attain such a position.

On the other hand, the representation of women in the Knesset was extremely low during the first five decades of Israel's existence. The 2003 elections marked the start of a striking increase in women's representation. According to the latest public opinion polls, this upward trend will continue in the 2013 elections, with some 25 women expected to be elected to the Knesset in the upcoming elections.

Figure 1: Number of Women Elected in Each Knesset Election

Although this trend of improvement is significant, Israel is still ranked very low in the world when it comes to the representation of women in parliament. As of March 2012, Israel ranked 79th in the world, with 78 countries having higher share of women in parliament. (When considering this finding, it is important to take into account that some parties in Israel exclude women from party lists completely due to religious ideology. Shas, United Torah Judaism, and Ra'am-Ta'al are the most prominent of these parties.) If we reduce our reference point to the 34 OECD countries, Israel ranks 25th.

Figure 2: Percentage of Women in Parliament in OECD Countries 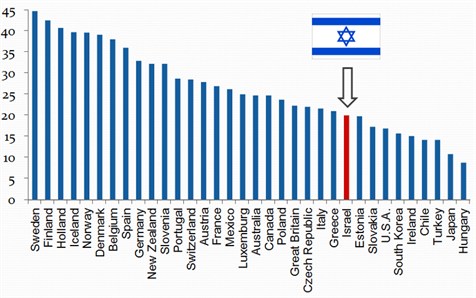 Moreover, the increase in women's representation in the Knesset was not accompanied by a significant increase in women's representation in the cabinet. As of 1995, only five women had ever served as ministers in the government. From 1996 until today, a period of 16 years, eight additional women have been appointed as ministers. This means that to date, only 13 of the 221 ministers who have served in the Israeli government—less than 6%!—have been women! If we compare that figure to the percentage of women in the government in the 34 countries of the OECD, it emerges that Israel is positioned in the next to last place. Only in Hungary are there less women in the government than in Israel.

In conclusion, despite the relative improvement in the representation of women in the Knesset, Israel still lags behind most of the world's democracies in this respect. The representation of women in the cabinet is even lower. The most certain way to bring about meaningful change in women's representation in government—the central arena of decision making and policymaking—is to increase women's representation in the Knesset. We must take vigorous action to achieve this goal. Studies have shown that greater involvement of women in key political positions plays a vital role in political culture. The visibility of women in Israeli politics plays an important role in Israeli democracy, especially in light of the alarming trends of exclusion of women from the public sphere that have been high on the public agenda in recent times.