In the Israeli municipal elections of 2013, only half of the eligible voters voted and a minor number of women got into the mayor's office. Dr. Nir Atmor, Dr. Dana Blander, and Assaf Shapira share some preliminary findings on voter turnout and women's representation in the 2013 local elections. 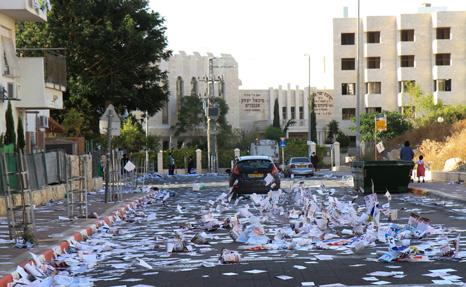 On October 22, 2013, municipal elections were held in Israel for the 14th time since the founding of the State. Although there was a heated race between the mayoral candidates in several locales, the campaign generally seemed sleepy. Only half of eligible voters bothered to go to the polls and vote.As of the writing of this article, the final results of the elections have not been released. This article, therefore, relates to the preliminary results.

The pattern of voter participation remained the same as in previous elections: There was low voter turnout in the large centers of population. In the ten largest cities in Israel, there was a decline in voter turnout. In Tel Aviv, for example, only 28.7% of eligible voters voted, while in Jerusalem only 36% went to the polls. Smaller towns had higher turnout than major cities, although in some small towns there was a decline in voter participation. In the 2013 elections, as in the past, voter turnout in the Arab local authorities was higher than the national average.

The current elections were also characterized by a high rate of female candidates for mayor and city council; however, in the 191 local authorities where elections were held, only two women were elected mayor (one or two additional women will compete in run-off elections). The current elections, accordingly, show that voter turnout has stabilized at a lower level than before. This is a trend that has also been found in the Israeli national elections during the past decade.

At the time of this writing, the average voter participation rate in the local elections of 2013 was 50.9%, which is similar to the  participation rate in the elections of 2008.In 2008, the final voter turnout was 51.0%, which is 1% higher than the current figures for voter turnout in 2013. It is expected, however, that the final figures for 2013 will be a bit higher, since the preliminary figures that have been released do not include votes cast by Israeli soldiers and votes that were cast at polls that are accessible to people with disabilities. However, an examination of voter turnout in the individual local authorities reveals that in some places voter participation increased, in others it declined, and in others it remained constant. Where was each of these trends observed?

The following analysis examines this question based on preliminary data on voter participation in 159 local authorities that held elections in both 2008 and 2013, as published on the website of the Israeli Ministry of the Interior.See the data on voting rates in the municipal elections available on the Ministry of the Interior's website as of 1:45 p.m. on October 23, 2013.

Where Did Voter Turnout Increase?

Where Was Voter Turnout Stable?(Changes of up to 1%)

Stability in voter participation rates in 2013 and 2008 was found in 11 local authorities. Voting rates in Ramat Gan remained stable, with just a 1% rise in voter turnout, while in Rosh Pina and Ashkelon there was a slight decrease of 0.1% compared to 2008. Similarly, as seen in the table below, voter turnout in Kfar Saba, Rosh HaAyin, and Kochav Yair was also stable, and turnout was high and stable in the Arab local councils of Kafr Yasif, Bir al-Maksur, Zarzir, Ein Mahil, and Bu'eine Nujeidat.

Where was the Greatest Decline in Voter Turnout?

An examination of voting rates in 2013 as compared to 2008 indicates that in contrast to the mild increases that were found in a small number of communities, the declines in voter participation that were recorded in 2013 were very dramatic. No less than 25 local authorities recorded declines in voter turnout of over 10% compared to the 2008 elections. Kiryat Yam had the lowest voter turnout in Israel: 17.5 % compared to 47.9 % in 2008, a drop of over 30%.  Givat Shmuel, Kiryat Ata, and Nes Ziona each recorded a decline of over 20%. Declines were also noted in large cities such as Karmiel, Nazareth Illit , Shoham, Modi'in Maccabim-Re'ut, and Netanya, as well as in small local authorities such as Omer, Kfar Veradim, Kfar Tabor, Oranit, and more. Similarly, some Arab local authorities such as Umm Al Fahm, Ilut, and Maghar recorded significant decreases in voter turnout, as can be seen in Table 3 below.

The Decline in Voter Turnout in Major Cites

A decline in voter participation in 10 major cities in Israel was particularly evident in the elections in 2013. (The cities studied were selected based on their total number of eligible voters.)  Tel Aviv and Jerusalem recorded a drop of approximately 7% and Haifa recorded a drop of approximately 6%. There was a decline of over 10% in Netanya, and a decline of 5% in Be'er-Sheva.

The results of the current election show that the level of participation of Israeli citizens in local politics has stabilized at around half of the electorate during the last decade. Prior to that, as can be seen in Figure 1, voter turnout in Israel was higher.

There are a variety of explanations for the decline in voter turnout in local elections. These include the division that was made between the day of the national elections and the day of local elections (which were held on the same day until 1978), the cancellation of the  national day of rest on the day of municipal elections (1993), the priority that is assigned to national issues as opposed to local issues  in Israel, the negative image that local government has in the eyes of the public, which sees local government as corrupt, and the public's feelings of lack of efficacy , especially in the big cities.For further information see Atmor 2013 (Hebrew), Shapira 2013, Blander 2008,

In 2008, out of 163 local authorities in which elections were held, only three women were elected as mayor: Miriam Feirberg in Netanya, Yael German in Herzliya, and Flora Shoshan in Mitzpe Ramon.  This is a level of representation of 1.8% (not including regional councils). These three women were later joined by Tali Ploskov of Arad, who was elected at a later date.

In the first round of municipal elections in 2013, only two women were elected mayor (Miriam Feirberg of Netanya and Lizy Delaricha of Ganei Tikva). In addition, Yaela Machlis of Yehud will compete in a run-off election, and  Shoshi Kahlon-Kidor of Kfar Yona (where support for the leading candidate is just 40%) may participate in a run-off as well. Since elections were held in 191 local authorities, if both of these women are indeed elected, the proportion of women elected to office in 2003 will be 2.1%. In Arad, the mayoral elections will be held at a later date.

A preliminary analysis of the results of the 2013 elections results reveals that what has been in the last  decade is probably what will continue to be; the voting trends that have been witnessed since the start of the millennium are likely to continue. Low voter turnout, at a rate of about half the electorate, has become the norm in municipal elections in Israel, just as the participation rate in national elections for the Knesset over the last decade has stabilized at around 65 %. Women's representation in mayoral positions has also not changed much, and is still scant. This dismal situation is concerning, since local authorities have a great deal of impact on the everyday life of the citizen, and because political participation on the local level could be a source of citizen empowerment and could potentially increase political participation in general.