In 2010, the Justice Department published a memorandum of a new planning and building bill that would replace Israel's Planning and Building Law of 5725-1965, which monitors and regulates all building and designation of land use in Israel.

According to the initiators of this reform, the new bill is intended to simplify, streamline, and shorten the planning process, while at the same time improving the quality of planning and of its implementation.  Among its proposals, the memorandum includes the following:

The new bill has been sharply criticized by a variety of organizations, which have argued,inter alia, that the proposed legislation damages the mechanisms for control and supervision in the planning system; that it makes the system more vulnerable to corruption; that it strengthens the political operators within the planning bodies, at the expense of professional representatives and representatives of the public, that it deepens the gaps between the different local authorities and between the center and the periphery; and that it does not establish sufficient mechanisms for involving the public in the planning process.

The proposed reform raises a number of important and basic questions that warrant in-depth and serious public debate. These include:

On February 24, 2011, IDI convened its George Shultz Roundtable Forum to discuss the aforementioned questions. The panel included both supporters and opponents of the new law, in order to present as balanced a picture of the proposed reform as possible. 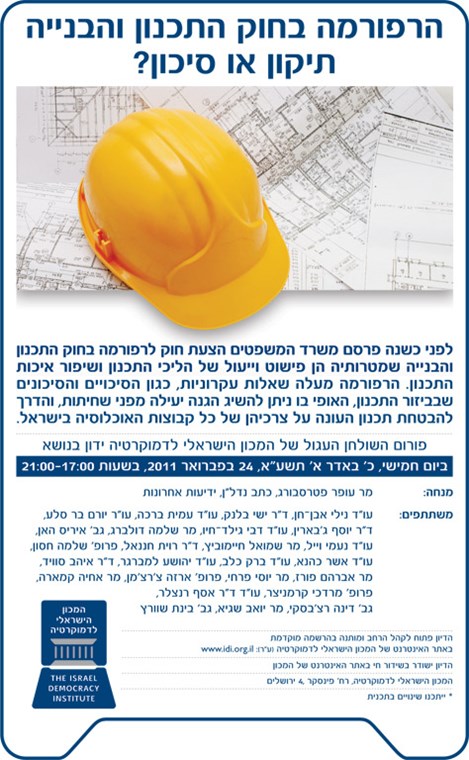