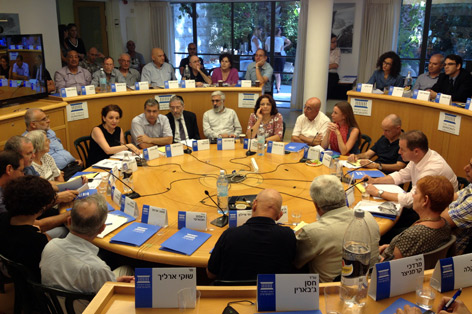 Following the murder of the Eyal Yifrach, Naftali Fraenkel, Gilad Shaar, and Mohammed Abu Khdeir, and during the course of Operation Protective Edge, there was a sharp escalation of tension between Jews and Arabs in Israeli public discourse, sometimes even descending into violence. A liberal and pluralistic society cannot tolerate such statements and actions, which threaten democratic political culture.

To prevent further deterioration of the situation, on August 6, 2014, IDI brought together dozens of thinkers and leaders for an emergency meeting designed to lay the foundation for coexistence and mutual understanding between Jewish and Arab citizens. The discussion focused on the following questions:

According to IDI President Yohanan Plesner, the importance of the meeting was not just the fact that it took place, but rather "the understanding and willingness to reach agreement on guidelines for a shared life, both in times of routine and times of emergency." He stressed that "this is what the silent majority wants. The majority of Israelis unequivocally rejects the expressions of racism that we have witnessed in recent weeks." Plesner called for the leadership of both Jewish and Arab society to put this issue at the top of their agendas. He pledged that IDI will continue its efforts in this realm and asserted that this meeting was just the beginning of a long-term process.

Jabir Asaqla, Co-Executive Director of Sikkuy, the Association for the Advancement of Civic Equality, said that the events of recent weeks are a peak in a powerful wave of racism of unparalleled intensity. He asserted that the incitement has been led by Ministers and members of Knesset, which has granted legitimacy to people who utter racial slurs and harm Arabs both verbally and physically in the public sphere. "I am one of those people who believes that it is possible to do something, that it is possible to stand up in the face of this wave of hatred, which unfortunately is not the first, but which might be the strongest," he said. Asaqla urged Jews and Arabs to join together in action and stressed the need for messages of humanism and democracy that can serve as an alternative to the voices of incitement and violence that damage both sides.

IDI Vice President of Research Prof. Mordechai Kremnitzer said that as a first step, IDI will appeal to the Attorney General and will urge stricter enforcement of Israel's laws against incitement and racism. As a next step, he said that IDI will work to draft a common declaration on this matter. Prof. Kremnitzer affirmed the commitment of the participants in the meeting to dealing with this issue and asserted that they will work to advance Israel's shared civic agenda and to eradicate manifestations of hatred and racism.