From February 12-15 the Israel Democracy Institute (IDI) gathered more than 30 local and international leaders in Jerusalem for the sixth annual meeting of its International Advisory Council (IAC). During the four-day visit, participants discussed the critical challenges facing Israeli democracy with leaders of Israeli government, civil society and business.

At the Knesset, the Council met with Knesset speaker Yuli Edelstein (Likud) and opposition Leader Isaac Herzog (Labor). The visit focused on the need for electoral reform. Edelstein said there is no doubt that structural changes must be made to the system, but stressed the importance of maintaining proper representation for all sectors and minorities and protecting their rights.

At City Hall, Jerusalem Mayor Nir Barkat shared his vision for a united Jerusalem where Jews and Arabs live side-by-side and presented the significant changes that have happened over the past several years in Jerusalem for people of all walks of life and from all sectors.

Participants also had the opportunity to meet behind closed doors with the Governor of the Bank of Israel Karnit Flug. At the meeting, IDI President Yohanan Plesner emphasized that the lack of stability in the Israeli political system "harms the economy and prevents leaders from planning for and implementing long-term policy." He stressed the importance "filling the public discourse with the urgency of the issue, emphasizing the economic price" that all Israeli citizens and the state pay for these inefficiencies.

Participants also met with Israeli President Rivlin at his residence, where they discussed the challenges facing Israeli democracy, the President’s vision for a shared society, and the role of civil society organizations in realizing it. 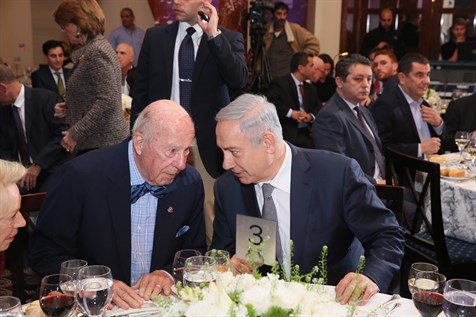 The highlight of the visit was a gala dinner on Sunday evening for 200 invited guests, including Prime Minister Benjamin Netanyahu, at the King David Hotel. At the event, Shultz addressed the Prime Minister, warning that the greatest danger facing Israel and the world today is the war being waged by the Islamic State and Iran in the name of religion. Shultz said that after centuries of the international community's separating religion and state, the two are becoming intertwined.

"We have to be focused and uncompromising," Shultz said.

Netanyahu, paid tribute to Shultz and thanked the former secretary of state's service to and support of Israel, said, "International terrorism is not the result of the activities of individuals but the work of terror states." Netanyahu said Shultz understood this when he was in office in the '80s and it helped to combat terrorism then. "That thinking is what is required today."

In his remarks, Plesner stressed that, "Too often, the public's yearnings for decisive solutions or easy fixes make democracy seem like a luxury we cannot afford….Israel's democratic character is not a luxury, but something that must be constantly supported and fine-tuned." He pledged that IDI would continue to lead efforts to buttress Israel’s democratic foundations, even in hard times.

List of IAC Participants and Their Hometowns
Members of the IAC