The index, polled between Dec. 29 and 30, 2015 – before the Jan. 1 Tel Aviv terror attack and before the indictments against the Jewish suspects were handed down – focuses on the Israeli public’s positions on aspects of the efforts to prevent terror attacks and on issues in the background of these incidents, such as the current level of support for the two-states-for-two-peoples solution, the relative bond to the land among Jews and Palestinians, and the balance between Israel’s Jewish and democratic components.

In the wake of Israel’s State Attorney's indictments for murder and assisted murder against two Jewish men suspected of committing the July 2015 arson attack in the village of Duma, this month's Israel Democracy Institute/Tel-Aviv University Peace Index poll finds 30 percent of Jews believe Jewish terrorists should be interrogated differently and given milder punishments than Palestinian terrorists.

Similarly, regarding punishments for Jewish and Palestinian terrorists, while 63% of the Jewish public disagrees that courts should give Jews milder punishments, 30% take the opposite stance: Jews should be punished more softly.

The index, polled between Dec. 29 and 30, 2015 – before the Jan. 1 Tel Aviv terror attack and before the indictments against the Jewish suspects were handed down -- focuses on the Israeli public’s positions on aspects of the efforts to prevent terror attacks and on issues in the background of these incidents, such as the current level of support for the two-states-for-two-peoples solution, the relative bond to the land among Jews and Palestinians, and the balance between Israel’s Jewish and democratic components.

SHIN BET SECURITY SERVICE METHODOLOGIES
The Israeli public has recently been hearing claims by the lawyers of those accused of the Duma attack – 21-year-old Amiram Ben Oliel from Jerusalem and a 17-year-old minor from Samaria – that the rights of the detainees suspected of the Dawabsha family in Duma have been violated.

When asked about the appropriateness of Shin Bet's methods when investigating terror attacks, the findings show the Jewish public makes a distinction between interrogations of Palestinian suspects and of Jewish suspects.

• Palestinian suspects: The highest rate (43.5%) views Shin Bet's methods as appropriate, compared to 21% who see them as too mild and only 7% who consider them too harsh. A higher-than-usual rate (28%) does not know.

• Jewish suspects: Here too, the highest number sees the methods as appropriate (36%). Yet, about one-fourth (23.5%) say that methods used against Jewish suspect are too harsh, or three times the corresponding rate regarding Arab suspects.

Further, when asked about Shin Bet's efforts to prevent terror attacks, the Jewish public agrees almost completely (88%) that Shin Bet is making every possible effort to prevent Palestinian terror attacks against Jews. As for the efforts devoted to preventing Jewish attacks against Palestinians, the agreement that Shin Bet is doing its utmost is slightly smaller though still very wide (78%). However, there are gaps between political affiliations: 50% of Meretz, about 2/3 of Zionist Union, 88% of Kulanu and Habayit Hayehudi, 84% of Likud voters think the Shin Bet is doing its best to prevent Jewish terror.

FEAR OF BEING ATTACKED
Fear is on the rise among Jewish Israelis of being attacked by a terrorist.

About 70% of the Jewish respondents say they currently fear they themselves or someone close to them will be harmed in the terror wave, representing a stead incline. In November, the corresponding rate was 67%, and in October it was 57%.

In the Arab public the rate of those who fear being harmed stands at 65.5%.

ISRAEL AS A JEWISH AND DEMOCRATIC STATE
The Jewish public is almost evenly split between those who disagree that Israel is becoming more Jewish and less democratic (about 50%) and those who agree that it is (about 45%). Those who most agree are voters on the center and the left (Meretz 100%, Zionist Union 73% and Yesh Atid 62%). In contrast, only 8% of Habayit Hayehudi voters say the state is becoming more Jewish than democratic.

Two states for two peoples: A small majority (52%) of the Jewish public supports the two-states-for-two-peoples solution, while 43% oppose it. In previous years, the rates of support for the two-state solution came to about two-thirds and even higher.

In contrast, a solid majority (80%) of Arab Israelis supports the two-states-for-two-peoples solution.

In contrast, a nearly half of Arab Israelis (41%) considers that the Jews’ and Palestinians’ bond to the land is of similar strength.

The Peace Index is a project of the Evens Program for Mediation and Conflict Resolution at Tel Aviv University and the Guttman Center for Public Opinion and Policy Research of the Israel Democracy Institute. This month's survey was conducted by telephone on December 29-30, 2015, by the Midgam Research Institute. The survey included 600 respondents, who constitute a representative national sample of the entire adult population of Israel aged 18 and over. The maximum measurement error for the entire sample is ±4.1% at a confidence level of 95%. http://www.peaceindex.org/defaultEng.aspx 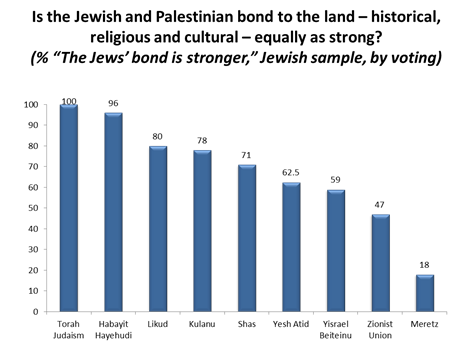