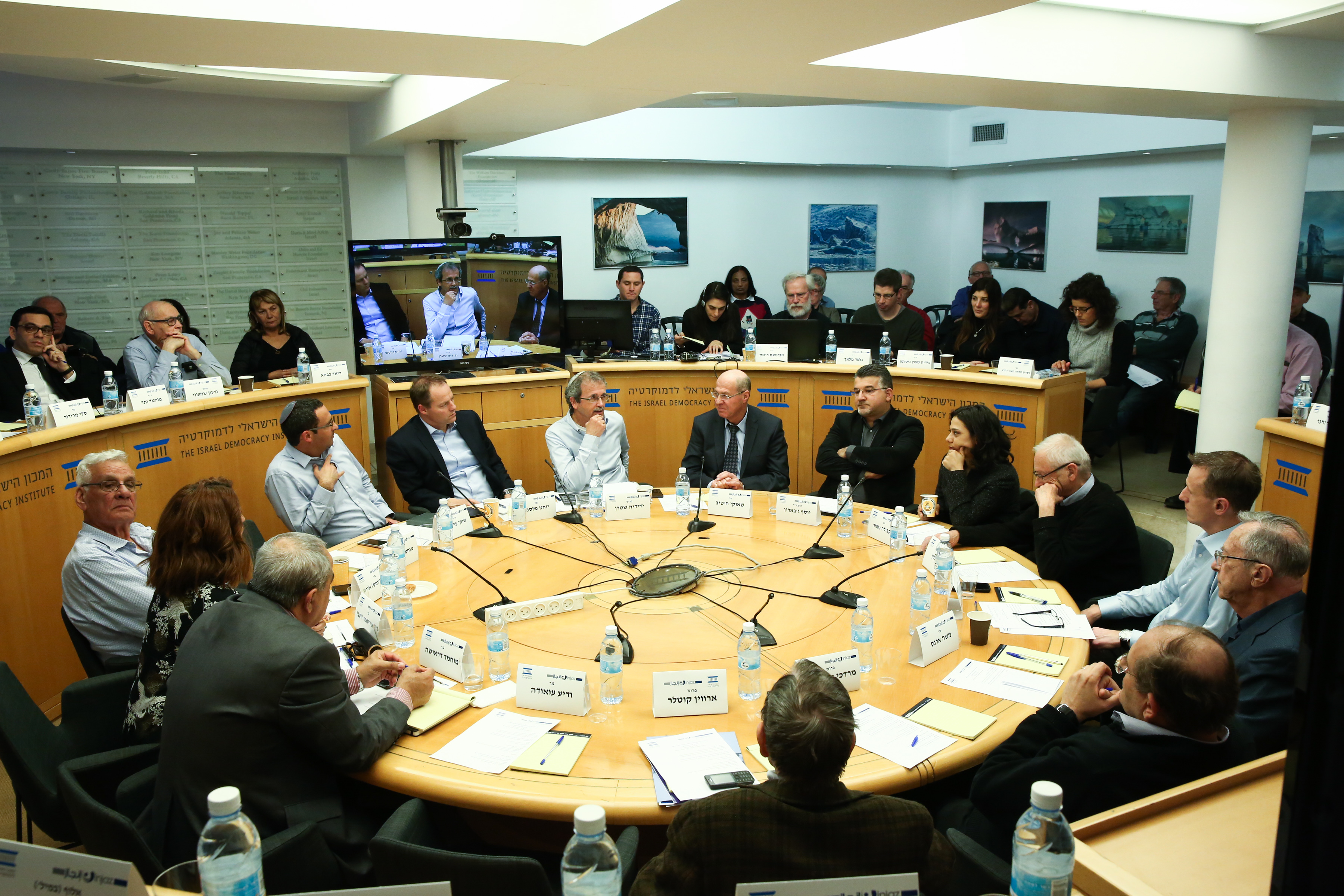 The Israel Democracy Institute, in cooperation with the Injaz Center, conducted a conference on Wednesday, February 28, about Israel's Arab citizens. Held at IDI, attendees discussed Arab leadership in Israel, examining its relationship to the political leadership in Israel as well as the Arab public.

The conference was the culmination of IDI's Nation-State Seminar series of workshops, which have taken place at the Israel Democracy Institute, under the direction of Prof. Yedidia Stern, IDI Vice President of Research, and Dr. Shuki Friedman, Director of IDI's Center for Religion, Nation and State.

Below, are the highlights of the Arab Political Leadership in Israel conference:

MK Dr. Benny Begin (Likud) noted during the conference that before the government's final decision regarding the five-year plan to advance Arab society, meetings were held between 40-50 Knesset members representing the Joint List Party and government representatives. According to MK Begin, these meetings contributed to a consensus being reached on the final version of the program. Begin added that, "it is a mistake to deny the ability to find areas of cooperation in the dispute between Jews and Arabs. What's good for Arabs is good for Jews, and when something isn't good – it's not good for anyone."

Yohanan Plesner, President Israel Democracy Institute: "While the government reflected Israeli public opinion by developing the five-year plan, it has not promoted any initiative of a national scope. This can be addressed by seizing the opportunity presented in the equal allocation of resources. Meanwhile, the Arab political leadership should assume responsibility and seek to achieve practical results, through a process similar to the one carried out by [Education] Minister [Naftali] Bennett when he was with the National Religious Party."

It is a mistake to deny the ability to find areas of cooperation in the dispute between Jews and Arabs. What's good for Arabs is good for Jews, and when something isn't good – it's not good for anyone. MK Dr. Benny Begin

Regarding the data compiled by IDI's 2016 Israeli Democracy Index that pointed to a lack of faith by Israel's Arab community in its own leadership, MK Dr. Yousef Jabareen (Joint List Party) noted that, "The Arab leadership in the Knesset is experiencing a campaign of delegitimization by government ministers and the prime minister, especially since the establishment of the Joint List. This is impacting the Arab public and is an unprecedented situation. As such, this government is blurring the lines between substantive debates on equality and the occupation, shifting the central theme to that of the conflict between Jews and Arabs."

Mohammed Barakeh, Chairman, Higher Arab Monitoring Committee: "The state as an institution tends to engineer the Arab public's consciousness and demarcate the boundaries of legitimacy for its leadership, between Zionist Union MK Zouheir Bahloul and Meretz MK Esawi Freige. The state should cease to patronize the Arab population and stop talking about the restrictions within which the Arab leadership must operate."

MK and Former Minister Prof. Moshe Arens: "The Joint List Party is not contributing to a rapprochement between Jews and Arabs, and is actually causing damage. What should the Jewish public think when an MK goes on board the Mavi Marmara? On the other hand, there is an anomaly in a list featuring 13 Knesset members not having a realistic chance to join any government coalition. Rabin exploited Arab MKs in order to pass the Oslo Agreement, but did not really include them in the running of the government. The question is when and how this will ever happen."

Journalist and Arab social activist Makbula Nassar noted that, "The starting point for Arab MKs is that they are perceived as being 13 against 107. Most of the issues they deal with concern Arab-Jewish relations, which are completely separated from either the opposition or the coalition. The Arab public faces adversity on a number of fronts and demands that solutions be provided by its elected officials. The average citizen does not know to turn to someone else for help, which may explain the problem of trust that the surveys suggest. However, the fact that only 5 percent of Arabs voted for other parties, proves that Jewish politicians lack the legitimacy to speak for them."

The state as an institution tends to engineer the Arab public's consciousness and demarcate the boundaries of legitimacy for its leadership, between Zionist Union MK Zouheir Bahloul and Meretz MK Esawi Freige. The state should cease to patronize the Arab population and stop talking about the restrictions within which the Arab leadership must operate. Mohammed Barakeh

Prof. Tamar Hermann, Academic Director, IDI's Guttman Center for Public Opinion and Policy Research: "It can't be denied that Jewish society is troubled by the fact that the state is not Jewish enough. The tendency to view the public as homogenous ignores the variety of identities one sees among the citizens of Israel. The Jewish public is willing to increase budgets allocated to the Arab public for infrastructure and integration in the labor market. However, this public simultaneously refuses to share ownership of the decision-making process, even on economic matters. Meanwhile, we see an Arab society that has a great desire to integrate into Israeli society, but is unwilling to compromise on the national issue."

Shawki Khatib, Chairman, Injaz Center for Professional Arab Local Governance: "Whereas minorities are encouraged to participate in the democratic game around the world, the Arab population in Israel must petition the courts to be a part of it. Equality in Israeli society is not possible without talking about the relationship between Jews and Arabs. Unfortunately, the executive and legislative branches of government emphasize the Jewish aspect of the country instead of the democratic and egalitarian aspects. There is a rampant majority in Israeli society that acts as if it is a minority while assuming greater rights for itself. "

Prof. Mordechai Kremnitzer, Vice President of Research, IDI: "We are at a critical point in the battle for rights and equality. However, this battle also depends on the very nationalistic Israeli leadership. The existence of an [Arab-Jewish] conflict makes it difficult to promote equality, since it is hard to support the advancement of someone who is perceived to be an enemy. What is harming the relationship between Jews and Arabs, and can be addressed by the Arab leadership, is the Arab public's attitude regarding the Jewish right to self-determination, conditioned on the existence of similar national rights to those of the Palestinians."