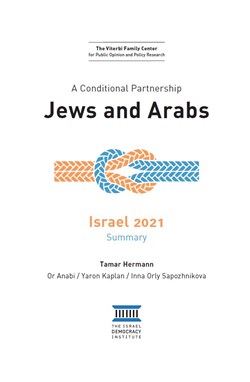 The nature of the relations between Jewish and Arab citizens in the State of Israel is one of the most critical issues impacting both Israeli democracy as well as solidarity the solidarity and resilience of Israeli society.

These relations have undergone, and are currently undergoing, significant changes- reflecting the influence of local, regional, and global factors. However, one fact remains unaltered: Israel is defined as the nation state of the Jewish people alone—a democratic state, but at the same time—the state of the Jewish majority, and a state in which the Arab minority constitutes around 22% of the population.

The research report on which the data presented in this summary is based, is the fourth in the series A Conditional Partnership: Jews and Arabs in Israel (following those published in 2016, 2017, and 2019). While in the past, each report was based on a single survey, this year we conducted two surveys: the first in April 2021, and the second in August 2021. Our aim in doing so was to assess whether the various events of the intervening months—chief among them the violence in Israel’s mixed cities and the inclusion of Ra’am in the new governing coalition—led to a substantial change in relations between Jews and Arabs in Israel.

Overall, the changes we found were less significant than might be expected. Among the Arab public, changes can be noted mainly in a decline in the sense of pride in being Israeli and in a less favorable assessment of the state’s treatment of the Arab minority. Among the Jewish public, we see a decline in the willingness to live alongside Arabs, and in the willingness to allow Arabs to have a say in national decisions of critical significance.