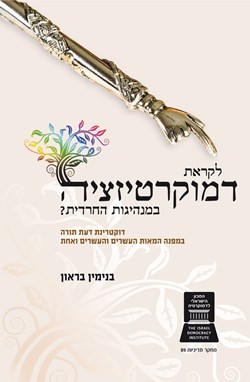 Toward Democratization in the Haredi Leadership?

Written by IDI researcher Dr. Benjamin Brown, this policy paper surveys the stages of development of the leadership of the Lithuanian stream and of the doctrine of Daat Torah that grants them their authority. A product of IDI's Religion and State project, the study reviews the changes that have taken place within this community's leadership from the 1970s, when Rabbi Elazar Menachem Shach was the gdol hador, of the Lithuanian community, through the period of Rabbi Yosef Shalom Elyashiv.

In recent years, interest in the ultra-Orthodox community has increased in Israel,  as people  have become aware of the growing impact that this community has on the country. Indeed, the haredi community is isolating itself less than in the past and is gradually taking a place in the center of the Israeli experience. This process is a result of the natural growth of the ultra-Orthodox community and of trends of increasing openness that are taking place within haredi society.  These trends include gradual integration in the workforce, increased rates of service in the Israel Defense Forces, exposure to the internet, and growing involvement in political decisions that have nation-wide implications. The degree to which these trends will continue in the future depends, to a great extent, on the stance of the haredi leadership, and whoever becomes the gdol hador(greatest sage of the generation) of the Lithuanian stream of Judaism will play a vital role. Will the leaders of the ultra-Orthodox community help these processes develop or fight fiercely to limit them? Will they promote professional training tracks for married yeshiva students or try to obstruct such programs? Will they accept the growing trends of enlistment in the military or speak out against them? Will they facilitate the expansion of secular studies in the haredi school system?

Written by IDI researcher Dr. Benjamin Brown, a lecturer in the Jewish Thought department of the Hebrew University of Jerusalem, Toward Democratization in the Haredi Leadership? surveys the stages of development of the leadership of the Lithuanian stream and of the doctrine of Daat Torah that grants them their authority. A product of IDI's Religion and State project, headed by Prof. Yedidia Z. Stern, the study reviews the changes that have taken place within this community's leadership from the 1970s, when Rabbi Elazar Menachem Shach was hailed by the Lithuanian community as the gdol hador, until our day, when Rabbi Yosef Shalom Elyashiv leads this community. These two men represent two different styles of leadership: the charismatic, ideological, and centralized leadership of Rabbi Shach, which splintered the haredi community into fragments, and the more pragmatic, less flamboyant style of Rabbi Elyashiv, who tries to avoid upheaval. Based on the dynamics that have characterized the past and an analysis of the changes in the present, the author presents some of the possible scenarios for the future.

What will the leadership of the Lithuanian stream of ultra-Orthodox Jewry be like in the next generation? Will it retain its centralized authoritarian nature? Or will it look to leadership models that are decentralized and perhaps more democratic? These questions should be of interest also to the non-Lithuanian, and even to those who are not part of haredi society. The gdol ha-dor (leading rabbinic scholar of the generation) of the Lithuanian stream is highly respected in haredi society, particularly in matters of policy and "hashkafa" ideology. In the next generation, he will be confronted with several major issues, first and foremost the integration of yeshiva students into military service (or a civilian alternative) and of married yeshiva students into the labor market. As the power of the haredim in Israeli society has grown, so has the importance of these questions - and of those who will decide them.

The leading Torah scholars of the Lithuanian community derive their authority from the doctrine of Da′at Torah, which empowers them to decide also public and private questions unrelated to halakha Jewish religious law). Since its early formulations at the beginning) of the twentieth century, a number of changes have taken place in the substance and application of this doctrine. A review and analysis of these changes can contribute to understanding the dynamic of the Lithuanian haredi leadership and the ways that it has evolved.

The first three stages of Da′at Torah gradually increased its scope: From a concept emphasizing the greatness of Torah, it became a model that emphasized the greatness of the authorities who interpreted the Torah, and from there, a demand to "observe to do according to all that they inform thee" (Deut. 17, 10). The doctrine reached its height in the fourth stage, under the leadership of Rabbi Elazar Menahem Mann Shach (1898-2001). During this period, the influence of the haredi leadership extended far beyond the boundaries of the community, reaching deep into general Israeli politics. For the first time, Rabbi Shach called for the monopolization of Da′at Torah so that it expressed the "pure hashkafa" - namely, his own. In the name of this position, he entered into battle with virtually every sector of haredi society.

After more than two decades of leadership, Rabbi Shach stepped down in the mid-1990s, leaving behind both weakened haredi leaders and ruptures that were hard to mend. It appeared as - though the Lithuanian community would be headed by two leaders Rabbi Yosef Shalom Eliashiv (born in 1910) and Rabbi Aharon Leib Steinman (born in 1914). Ultimately, the leadership of Rabbi Eliashiv triumphed, and he continues to lead the community as of late 2010, at the age of 100.

Rabbi Eliashiv is not a man of hashkafa, and his primary focus is on issuing halakhic rulings and studying Talmud. The practical work is carried out for him by the "attendants" surrounding him, who exert great influence on his decisions. It is therefore possible to view the period of his leadership - the fifth stage in the evolution of Da′at Torah - as the technocratization of the doctrine. Rabbi Eliashiv's pragmatic, non-ideological approach has enabled him to silently accept the "opening-up" of haredi society in several areas during the past decade, for example, professional training and job acquisition for married yeshiva students, and vocational and military service programs under army auspices.

The rule of the "technocrats" would seem to denote a transition from quasi-charismatic authority to a quasi-bureaucratic regime. Does this transition reflect the fading of the aura surrounding the great rabbis of the generation? And if so, is this process paving the way for a more democratic form of authority? Even if the probability of the haredi leadership being chosen by the public is nil, will a more decentralized, perhaps collective, leadership emerge in the next stage of the Da′at Torah doctrine? Will it be more favorably disposed to the forces in the field that are leading the way toward change?

There is no question that the charismatic leadership of Rabbi Shach's era is a thing of the past. Already today, many haredim, in particular the young, know that in truth it is not the gdol ha-dor who decides; but this does not appear to disturb them as long as "things run smoothly." Apparently, however, the Lithuanian community would still prefer a centralized leadership, with the possible exception of the interim period between the death of Rabbi Eliashiv and the consolidation of the status of his successor. The names that come up most often as possible candidates are those of Rabbi, Hayim Kanievsky (whose chances are slim), Rabbi Nissim Karelitz and Rabbi Shmuel Auerbach. Each of them, if they win the exalted position, is likely to establish a different pattern of leadership. But it is hard to imagine a situation in which haredi society would be willing to go back to the days of "pure hashkafa" of the Rabbi Shach school. Hence, it seems that in the end one leader will be chosen who will also inherit, to one degree or another, the rule of the technocrats along with the relative weakness of the leadership. The growing openness of haredi society will be stronger than him, and it is a process unlikely to stop. The greater these changes, the more pragmatic and removed from hashkafa the religious authority sought by haredi society will be. Thus, Da′at Torah will not become democratic, but it will be less authoritative than in the past. This change as well will take place as a result not of ideological awareness but of social weakness.