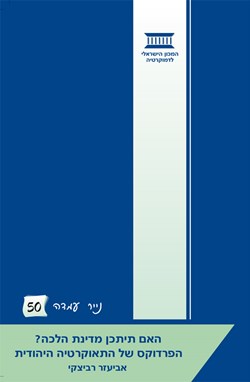 Is a Halakhic State Possible? The Paradox of Jewish Theocracy

Does Jewish law require that the State of Israel be fashioned into a religious theocracy? Are Torah-observant Jews required to impose Jewish law on the public against its will?  Prof. Aviezer Ravitzky explores the political and cultural options between the two extremes of a halakhic state and complete separation of church and state.

Does Jewish law require that the State of Israel be fashioned into a religious theocracy? Are Torah-observant Jews required to impose Jewish law on the public against its will? Both the internal logic of Jewish tradition and the actual situation of the Jews in Israel indicate that the answer is no. Opposition to the concept of "medinat halakha" (a halakhic state), however, does not necessarily lead to adoption of the concept of "separation of church and state." Both of these concepts lead to a dead end, but as this policy paper by Prof. Aviezer Ravitzky shows, there are many productive political and cultural options between these two poles.

The Jewish religion is a religion of legal, societal, and national dimensions. It is a religion of law (halakhah), in that it concentrates on its adherents' way of life and takes a greater interest in their tangible actions than in their declarations of faith. It is a social religion, in that it deals with communal values and seeks to shape the public domain, sometimes even before getting involved with the private. And it is a national religion, in that most of its commandments and directives pertain to a particular people, the congregation of Israel, and only a few are directed toward humanity per se. Taken together, these three elements afford the Jewish religious tradition a definite political character.

Naturally, such a religio-political tradition can never be indifferent with respect to a state that it regards as the state of the Jewish people. It will strive mightily to influence that state’s laws and values and to impose its imprint on its culture and symbols. Can one conclude therefore that a consistent religious position requires either fashioning the State of Israel into a halakhic theocracy or negating it altogether? To state the question differently: if adherents of the Torah gained control over Israeli society, would their faith require them (or permit them) to impose the Torah’s laws on one and all, even against the will of the community and its elected representatives? Would there be no escape from having the rule of Torah undercut that of the State?

This paper suggests a negative answer to these questions. It argues that the vision of halakhic theocracy is vulnerable to challenge both on the basis of the Jewish tradition’s age-old inner logic and on account of the actual condition of contemporary Jews.

First, the concern of the Halakhah for the social stability of the Jewish polity precedes its care for that polity’s religious character and halakhic fitness. Even if there existed a religious directive to establish an independent regime of Torah scholars, that directive would be perpetually suspended owing to considerations of societal will, common good, and peace.

Second, according to the classical halakhic literature, the “ideal” hand of Torah alone falls short of being able to maintain the “real” world. It needs the engagement of a human leadership that can rule, adjudicate, and impose sanctions outside the bounds of halakhah and sometimes even contrary to it. That is, “theocracy” itself proclaims that it is not self-sufficient; that it depends substantially on the existence of a secular, human and political realm.

Third, even the most theocratic utopian concept in no way negates the sensitivity to concrete political situations. On the contrary, the more the vision reaches for the stars, the more the visionary may defer its realisation to other times and identify ways of adapting to actual historical situations, past and present. As long as one lives in a concrete historical time, here and now, the utopian may become a realist, the theocrat may turn into a democrat, and even the messianic romantic can come to appear as a political pragmatist.

Finally, the vision of halakhic theocracy faces a line of practical difficulties related to the juridical standing of non-Jews, to the contemporary figure of the Jewish person, and to the current image of the halakhah and its exponents. These obstacles grow out of the very grafting of the term “state”, in its modern sense, onto the terms “Torah” and “halakhah” with their traditional, pre-modern meanings.

However, the criticism of the slogan “halakhic state” does not imply endorsement of the opposing slogan, “separation of religion and state”. The second gives rise to its own set of serious difficulties, from the perspectives of the religion of Israel and of the State of Israel alike. Both slogans are equally refutable, however, between these two poles lies a wide array of fruitful political and cultural options.