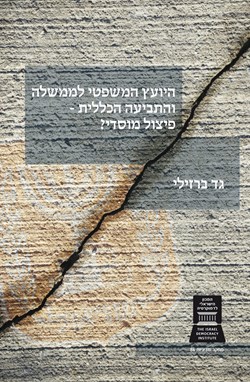 The Attorney General and the State Prosecutor

This policy paper addresses the heated debate in Israel regarding the question of whether to separate the institutions of the state prosecutor and the attorney general. What should the mutual relations between these institutions be? The book's recommendations are based on a comprehensive, comparative study that examined  dozens of regimes around the world, in order to gain insights on the ideal and the reality in Israel.

The state prosecutor and the attorney general are among the most important public institutions for shaping political regimes and societies. The heated debate in Israel regarding the question of whether to separate these two institutions is just one of many fundamental dilemmas related to the rule of law, politics, democracy, and society.

What is the accepted relationship between the state prosecutor and the attorney general in a healthy democracy? How should these two offices relate to one another? How do these positions function in Israel, and how did Israel's system come about? What type of reform is advisable in Israel given its unique political and social ciscumstances?

The answers to these questions are based on a comparative study that analyzed other political regimes in order to gain insights into the reality of the current Israeli system and arrive at recommendations for reform. The key recommendation that emerges from this policy paper is to institutionally separate the office of the attorney general from that of the state prosecution. This move would constitute a major reform in one of the most prominent and crucial aspects of governance, and is likely to bolster the effectiveness of both institutions.

Prof. Gad Barzilai, who penned this position paper, is an international expert on comparative politics and law and was a Professor of Political Science and Law in the Department of Political Science at Tel Aviv University. There he served as the co-Founder and co-Director of the Law, Politics & Society Graduate Program until 2005. He is currently a Professor at the University of Washington, where he is on the faculty of the Law, Societies, and Justice Program [LSJ], Comparative, Law and Society Studies Center [CLASS], and the Jackson School of International Studies.

A systematic examination of the legal and political regimes in 57 democratic states around the world indicates that the most prevalent configuration with respect to the functions of the state prosecution and those of the office of the attorney general entails institutional separation between the legal counsel to the government (or the executive branch) and the public prosecution.

For the most part - that is, in roughly two thirds of the democratic states surveyed - an institutionally separate and independent branch handles criminal prosecution, while the state attorney's office, which is generally part of the Ministry of Justice, is responsible for providing legal advice to the government (or the executive branch) and representing the state in civil matters (as both respondent and plaintiff). In only 37% of the democracies surveyed in this comparative study is the attorney general also directly responsible for the state prosecutor's office, usually under the aegis of the Ministry of Justice.

Thus, the current situation in Israel in which there is no institutional separation - and the attorney general (who is generally not an expert in criminal law) takes precedence over the state prosecutor and can veto his or her decisions - is quite unusual from a comparative perspective.

The first chapter of the study offers a comparative analysis of global institutional trends with regard to combining or separating the roles of legal counsel and civil representation, on one hand, and criminal prosecution, on the other. This analysis is based largely on primary source material that enabled a comparison of the legal systems in 57 democratic states around the world, encompassing various legal traditions and cultures. This is followed by a chapter that analyzes the development of the office of attorney general in Israel, in particular, and the historical changes that have affected it over time, with an emphasis on its institutional and legal genealogy in a political and cultural context.

The third chapter explains why institutional separation between the attorney general and the public prosecutor would be preferable in Israel, based on primary sources and personal interviews, as well as other empirical data.

The fourth and fifth chapters elucidate why institutional separation would not weaken the office of the attorney general and might even strengthen it, and explicate the factors that would ensure its strength and that of the state prosecution in the event of such a separation, as compared with the current situation.

The sixth and final chapter of this work clarifies that the proposed reform would establish a general, institutionally independent prosecutorial office through the separation of the office of the attorney general and the state prosecution.