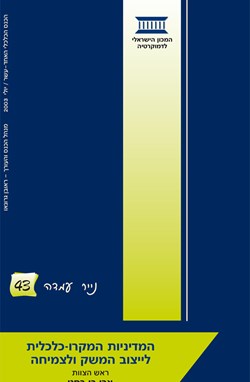 In 2001-2002, Israel’s GDP decreased for two years in a row. This paper, prepared for the 2003 Caesarea Economic Forum, aimed to formulate a suitable economic policy to improve Israel's economic performance and lay the groundwork for future growth.

In Israel's economic history it never happened that the GDP decreased two years in a row, as occurred in 2001-2002. Below is an English summary of a paper prepared for the 2003 Caesarea Economic Policy Planning Forum about remedies that may prevent Israel's financial decline towards a financial crisis, and create factors for long-term growth. This paper aimed to formulate a suitable economic policy to improve Israel's economic performance and lay the groundwork for future growth in the aftermath of the financial crisis of 2001-2002.

Preferred government size:
It is recommended to gradually reduce the rate of public expenditure within the GDP, while presenting the European average (in addition to American aid) as a long term marker.

The negative growth rate, high unemployment rate, very low level of inflation and the adopted economic plan require and enable a reduction of the interest rate, in the gradual and careful manner required by the economy’s characteristics and the fiscal policy. It is recommended that the interest policy be based on the following rules:

Reform in the Welfare System

D. Structural Reforms in Branches of the Economy