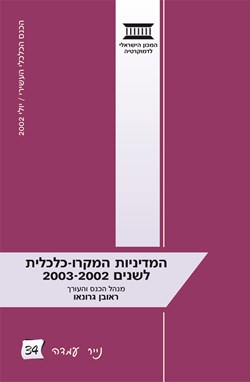 During these stormy days of new globalization economy, how will the Israeli market maneuver through the opportunities and dangers that exist in its wake? The following analysis, which suggests an outline for Israel's macro-economy for the years 2002-2003, offers a professional assessment given by two of the leading economists in Israel.

During the course of the macroeconomic team's work, the Knesset approved two emergency plans, and interest rates were more than doubled.

We will begin by taking a look at the situation from an historical perspective. If we look at growth rates since 1960, the only period in which there was a steep decline instead of growth was during the past two years. In other words, we can state at least preliminarily, that what Israel is currently facing is not simply a recession but a crisis; and the terminology is important. Two significant factors are causing this; the wave of terrorism and the global recession. If, at first, the global recession was more significant, as time passes the security situation is becoming more important in determining economic developments in Israel. These factors are significant in understanding economic development. Still, it should be emphasized that errors in policy management made the situation worse.

Policy management should be guided by the understanding that we in danger of facing a financial crisis.Thus, policy's supreme objective needs to be preventing a deterioration of this situation. Consequently, there is no need to employ an anti-cyclical policy, since this is not a recession but a crisis.In other words, expanding the deficit will not help in this case; it is liable to have precisely the opposite effect--increasing the likelihood of a crisis.

Another point that the team brought up was the social stability consideration. Navigating policy in the near future should be done with an eye to preventing a security crisis (more severe than the one that currently exists), a financial crisis and a social crisis. If one of these occurs, the probability that the other two will also occur increases.

The current crisis catches Israeli society at one of its lowest points in terms of social stability. The unemployment rate passed 10% a while ago in some Arab localities and development towns. For those communities, the crisis is not a future matter, but is already present, here and now. The unemployment rate is the result of globalization, among other things, which makes the fluctuations even more significant in terms of employment and other problems.

A second point related to the unemployment rate is the sharp rise in economic inequality in Israel. Compared with other countries, the socioeconomic gap in Israel isvery great. Part of the reason stems from the fact that the educational system does not equip its graduates with suitable tools–60 percent of Israeli youth don't even have matriculation certificates. Even among those who do, not all can get into a university. In other words, even after taking into account the numbers of undereducated youth in the ultra-Orthodox and Arab communities, a fundamental social stability problem still exists. Some argue that transfer payments are responsible for the growing inequality: – there was quite a bit of discussion about the fact that transfer payments have risen considerably. However, when measured on an international scale, Israel is not very high on the list when one looks at the transfer payments rate vs. GDP.
Four countries precede Israel: Greece, Portugal, Spain and Italy. What distinguishes them is that their income level per capita is similar to Israel's on an international scale, the transfer payments place Israel at a fairly low level.

Encouragement can be drawn from countries similar to Israel–the industrialized countries of Asia, which are showing signs of a recovery. One factor that helps us (thanks to the government's disciplined behavior over a fairly long period) is a relatively low balance of payments deficit, a low external debt and high foreign currency balances. All of these certainly help protect the stability of Israel's economy. Without them, I believe that the financial crisis would have already taken place some time ago.

In the current economic situation, all the fiscal parameters have experienced reversals, according to two scales-- in relation to the past and in an international comparison: the debt, the deficit, spending and taxation have all grown. Another thing that has assumed importance, especially at a time of great uncertainty and during a dangerous security situation, is that the credibility of economic policy has been eroded. The credibility of economic policy is very important, especially when the economy itself is unstable. When there is uncertainty, the last thing that economic policy should do is to create additional uncertainty.

We recommend that policymakers strive for the environment of operative rules determined in the Maastricht Treaty. Specifically, regarding the economic plan, the team determined that the budget deficit established for 2002 is too high, the composition of the cutback includes too many taxes, the reduction in transfer payments is not balanced, and the reduction in wage expenditures is too small. The permanent level of defense spending must be financed by lowering spending or by increasing the tax burden.

These are problems not only of credibility, but also of the fiscal policy management culture. In the recent budget, government ministers did not know the price tag of each of the items brought before them--what the implications were of the unemployment rate, the growth rate, inequality, and other policy targets. Another point concerning policy management culture is the lack of decisiveness in dealing with private legislation. Thus, the Negev Law and the Large Families Law were canceled a number of times. Another matter is the lack of consistency in dealing with the problem of foreign workers. The scope of the phenomenon has increased while the declared intention has been to reduce their number. Thus, we recommend increasing budgetary credibility and transparency. There needs to be a quarterly report to the government, including a forecast of growth and revenues, prepared by an independent research institute. This would be a step on the path to the establishment of a proposed socioeconomic council. The government and the public should receive a report on economic policy targets and their impact on the budget. Ministers and the public need to know how much each measure costs and what it affects.

Regarding the Knesset, we support a proposal made by the government concerning private legislation. We also recommend establishing December 31 as the last date for approving the budget; there is no sense drawing out the bargaining and negotiating process until March 31. As for managing monetary policy–2001 was the third consecutive year in which the inflation target was underestimated.In my view, this was intentional. It is an expression of the fact that the Bank of Israel does not consider unemployment to be a sufficiently important consideration.

In December 2001, a sharp change occurred that caused a re-stabilizing of public expectations as a result of a deal struck between the governor of the Bank of Israel and the government. In other words, lowering the interest rate did not stem from a Bank of Israel initiative. Moreover, it was made parallel to an increase in the budget deficit as described above To the public, this means that the government is increasing the deficit while making sure to secure a spot for itself at the currency printing press, and the governor is helping it accomplish this.

All of this would not have happened if there had been a council of governors, since then it would have been more difficult to strike a deal with the government. Therefore, it is very important to establish price stability as the central goal of monetary policy-- a goal achieved at no small price. It is very important to ensure the Bank of Israel's independence; it is very important to establish an impartial board of governors, while maintaining the Bank's independence and establishing price stability as a central goal. However, it is also very important to set additional, secondary goals, such as a high level of economic activity. Managing monetary policy, exchange rates and foreign currency balances should be handled by the Bank. In this regard, the Bank's activity must also be made more transparent.

In conclusion, we focus briefly on the subject of the Israeli economy's basic problems. There has been a slowdown in productivity over several decades, and the rate of the population's participation in the workforce is low. This is mainly true regarding men, and is not true for women. When the rate of women's participation is compared and Israel's level of economic development is taken into account, women are certainly participating at a reasonable level.

Another question that arose is sharing the burden of defense spending. There was discussion of the fact that the Israeli government's total spending is among the highest in the world, and that is true. Israel is in first place, but that is the result of two factors: an unusually high level of defense spending, and interest payments stemming from the high level of debt, the majority of which was taken in order to finance the army's revamping after the Yom Kippur War. This leads us to conclude that interest payments are related to defense spending. If the unusual spending for defense and interest are removed, then Israel is no longer in first place. This reduction is a technical one, which conceals an important question that we all need to confront: Should the poor be paying for defense spending? In other words, should this spending be deducted from transfer payments? Should citizens who receive health and education services be paying it? Perhaps it should be financed by taxes? Fundamentally, this is a question of preference.