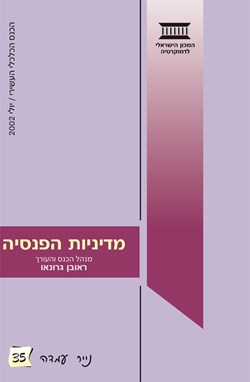 The financial team of the 10th Caesarea Economic Forum in 2002 discussed two central topics that stand at the forefront of daily public concern: the first issue considers the issue of mandatory pension legislation, and the second issue considers the integration of new pension funds in the capital market. Should pension contributions be made mandatory for all employees, or does the law need only to formalize and provide incentives for long-term savings?

The Annual Economic Conference’s Pension Team discussed a number of central issues that were presented to the plenum. The first subject was concerned with a mandatory pension law. The team did not reach a consensus on this issue. However, there was broad agreement opposing a government pension law. Likewise, the team agreed that should the Knesset enact a mandatory pension law, it should be implemented gradually.

Investing pension fund monies in the capital market was the second issue discussed at length at the conference. The speakers’ remarks revolved mainly around the method of implementing the move with regard to issues such as the safety net that the pension funds would receive, pension funds as a means of raising additional funds for both real investments in Israel and venture capital funds, etc. Some argued that currently it is not possible to transfer the funds’ monies to the capital market, in light of government guarantees of returns on the funds through earmarked bonds.

I. Mandatory Pension Law–Yes or No?

Israel’s institutionalized pension insurance includes two layers. The first, National Insurance, provides minimal pension insurance to every citizen in the State of Israel. The second, the pension and life insurance system, invests employer and employee premiums in interest-bearing assets, and the principal and interest are supposed to suffice for making the pension payments.

Opponents of a mandatory pension law raised the following arguments:

Supporters of the law raised the following arguments:

In the context of the deliberations, details of a mandatory pension law were discussed: up to what wage would the obligation to make contributions through the law be imposed and from what wage level would the pension insurance become voluntary; would the contributions need to be equal over the course of the insured person’s employment life, etc.

Currently, 70% of new pension fund monies are invested in government-issued earmarked bonds with an effective annual yield of 5.05%. Regarding the transfer of these monies to investments in the capital market, there was a consensus among the participants that making a transition to the capital market would be a positive move, but the main discussion focused on the question of whether it is possible to implement such a move, and if so, how. First, the idea was raised of transferring the entire economy (including the security forces) from defined benefit (DB) plans to defined contribution (DC) plans. Then the conditions allowing for such a move to be successfully implemented were brought up. Among other things, these conditions include the following: transparency, the ability to move between funds (including the possibility of revaluating the funds' assets at every stage) and the subsidy inherent in the earmarked bonds.

Still, there were those who argued that the funds' monies should not be transferred to the capital market until a minimum occupational pension is assured for retirees, as pensions in the United States are. There too, for the Social Security layer, which distributes occupational pensions to workers, the government issues earmarked bonds that guarantee the policyholders' monies and promise a defined yield. Only the third layer is invested in the capital market. Later on in the discussion, a proposal was raised to enact a mandatory pension law and ensure a yield on deposits up to the average wage level in the economy by issuing earmarked bonds, without ensuring a yield at all. This level would be defined as DB, while the rest of the pension monies would be deposited in DC plans.

The central question addressed in the discussion on the subject of transferring the monies to the capital market was who would bear the added risk of investments in the free market. In other words, should policyholders be provided with a safety net, such as ensuring a minimum yield, and how should the moral hazard problems of investment managers stemming from providing a guaranteed yield be resolved? Some discussion participants argued that in the current political climate it is not feasible to give policyholders an assured yield lower than the yield they currently receive, e.g., 5.05%. Others asserted that a safety net on a very low level could be provided, and that the pension funds should be transferred gradually to the capital market in this manner.

There were substantial disagreements on the safety net question. Some participants argued that providing a safety net means that the funds would not be responsible for their investments, since due to the moral hazard too many investment limitations would be placed on them. These participants asserted that a safety net should not be provided. Instead, investment managers should be given incentives to invest the pension monies responsibly in the free market, under as low a level of regulation as possible. Those who supported a safety net argued that the government provides such a net, whether directly or in the form of a state guarantee, as it guaranteed bank deposits, etc. A proposal was made to inject the safety net mechanism gradually into the pension funds, perhaps even on a voluntary basis in the first stage.

Similarly, the participants discussed the macroeconomic implications of transferring the funds' monies to the capital market. The earmarked bonds currently constitute a source for raising funds and financing the deficit. Halting the issuance of earmarked bonds means giving up these sources. At least in the medium term, there is a problem stemming from the government's previous commitments, so that overall there would be fewer sources of funds for financing the deficit. In contrast, continuing to issue earmarked bonds leads to a situation in which half of the government debt is not negotiable and as a result the negotiable bond market shrinks. If there is no deep and broad bond market, the capital market will also contract.

Another argument raised on the subject of transferring pension monies to the capital market is that these monies could constitute a source for cooperation on infrastructure projects and mortgages in the first stage, as well as a source for raising monies for the Israeli venture capital funds that currently raise money from foreign pension funds. In addition, the argument was raised that for the well-being of Israeli investors, there is a need for foreign investments in the context of the pension funds' asset portfolio.