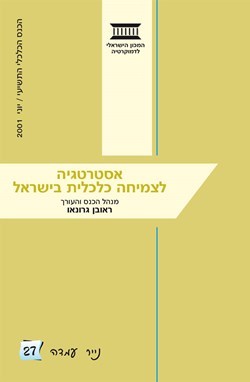 Strategy for Economic Growth in Israel

This policy paper, prepared for the 9th Caesarea Economic Policy Planning Forum in 2001, considers two aspects of stimulating economic growth in Israel: changes in policy on investment in education, and a sound plan for population dispersal as a solution to the spatial constraints that may slow the pace of economic growth.

All speakers agreed that investment in education is an essential component for growth and for narrowing Israel's social gaps. It is not clear whether current policy is indeed directed toward both of these goals. In order to achieve this, it was recommended that an obligatory core curriculum be established for use in schools of all the various education systems. Only by acquiring the basic skills in the curriculum will graduates become successfully integrated in the labor force. Mathematics and science should be made top priority subjects, and teachers in these fields should be compensated accordingly.

The system suffers from over-centralization and from the increasing involvement of professional unions. Consumers (students and parents) have very little influence on the quality of the system, and schools (principals and teachers) have very little obligation to report on the quality of the services they provide. It was suggested that decision-making be further decentralized by basing it on school districts: the residents of each region would elect a kind of board of directors for the school that would be responsible for hiring educational staff (principals and teachers).

The education budget, as currently structured, does nothing to narrow educational gaps. Since the budget is related to teachers' salaries, and teachers with a higher education and more seniority are concentrated in high-income regions, expenditures per student in outlying areas are much lower than for students in the central region. Criteria for allocation must be changed and budgets for students in outlying areas increased. Out-of-pocket expenses on education (such as after-school enrichment classes outside the formal educational system) increase steeply according to education level (the upper tenth percentile spends nine times more on education than a household falling within the fifth percentile). A targeted budget allocation to compensate for this gap should be considered.

The education system should be protected from the constant turbulence of the political world. A steady, consistent educational policy must be established in order achieve long-term goals.

Investments in research and development in Israel are made on a highly unequal basis. While start-up industries (in electronics, computers, software) and bio-technology and pharmaceutical companies enjoy R&D investments that rival those of the West, there is very little investment for revitalizing more traditional branches of the economy. These branches should be encouraged to expand their investments in R&D.

It was mentioned that while positive structural changes have been made in Israeli industry over the last few years, the dangers of this process should not be ignored. The rapid growth of hi-tech necessitated a heavy investment of foreign capital and a revaluation of the exchange rate, which negatively affected traditional branches of the economy. The increasing exposure of Israeli industry to the international capital market makes it vulnerable to fluctuations in market conditions. Decision-makers must take the necessary steps to cope with the serious potential dangers of this exposure.

The issue of infrastructure has been long neglected. An estimated long-term investment of NIS 50 billion is needed to narrow the gap between the infrastructure investments of Israel and Europe. Israeli investment in mass transportation is only 0.9% of the GNP, while in Europe, which enjoys a highly advanced transportation system, the comparable figure is 1.4%. This gap should be narrowed as soon as possible by increasing the investment in a rail system. At the same, investments should be increased for desalinization and sewage purification in order to address the country's water problem.

Infrastructure falls under the aegis of many government offices, making it difficult to come to agreements on policy. The government must work to promote cooperation among these offices in order to accelerate infrastructure investments and allow for renewal and growth. Many speakers preferred to discuss current policy and its consequences for growth. Their focus on was fiscal and monetary policy and on the job market.

In a year of heavy budgetary pressure, it is fitting to change priorities by making a 5-6% across-the-board cut in budgets that do not lead to growth, and then directing the freed-up resources to investment in infrastructure and R&D. Other speakers said that in slow growth years such as 2001, the government should not restrict itself to the guidelines of the Maastricht Convention. Rather, it should increase infrastructure investment in order to return to a process of solid growth. A recommendation was made to change the budgetary structure in favor of resource accounting. Under this system, capital outlays appear in the budget as current expenses according to the level of depreciation and the interest on the public capital reserve (as is customary in businesses and corporations), and not according to the current method of recording the entire investment as a budget expenditure. Similar recommendations called for separating the current budget from the development budget. While the current budget would be subject to the same rigid guidelines of the Deficit Reduction Law, the development budget would serve as anti-cyclical policy. This approach must not lead to the use of funds from one budget to pay for activities covered by another budget, and, if necessary, legislation should be passed to keep this from occurring.

Many speakers focused on another aspect of fiscal policy-taxation-and called for reform aimed at encouraging growth and reducing income gaps. Other speakers called for reducing transfer payments and using the freed-up funds to encourage growth.

Many speakers complained that the high interest rate has both a short- and long-term negative effect on incentives for investment and on growth.

The reduction in the relative salary level of poorly educated workers-coupled with the increase in the number of foreign workers and the growth in transfer payments-has led to their decreased participation in the labor force. The arrival of large numbers of foreign workers drove many Israelis and Palestinians out of jobs in agriculture, construction, tourism, and other areas. Today, there is a shortage of about 450,000 jobs in Israel.

The "From Guaranteed Income to Guaranteed Employment" program was recommended as a means of converting unemployment compensation into salary supplements. Thus, only people who actually take jobs benefit from the program, which is intended as means of encouraging the unemployed to return to the labor market.