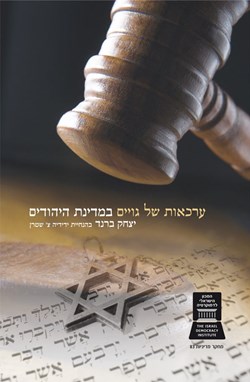 Non-Jewish Courts in the Jewish State

This policy paper by Dr. Yitzhak Brand presents the complex way in which halakha (Jewish law) relates to foreign legal systems that are not guided by the laws of the Torah. Are Israeli courts to be considered foreign courts since the Israeli legal system in not founded on Jewish religious law?

The religious community's attitude towards the legal system in Israel is strained and at times confrontational. This tension and conflict stem from a normative gap between secular law and Jewish law, as well as from an ideological divide between religious and secular-liberal values. Jewish law, in turn, intensifies this negative attitude because of its opposition to foreign court systems - which include Israeli courts, since the Israeli legal system in not founded on Jewish religious law.

Non-Jewish Courts in the Jewish State is a policy paper by Dr. Yitzhak Brand that seeks to present the complex way in which halakha (Jewish law) relates to foreign legal systems that are not guided by the laws of the Torah. Halakhic decisors throughout the generations dealt with this issue. Their rulings on this matter were dialectical: On the one hand, religious authorities protested strongly against appealing to the courts of non-Jews; on the other hand, they sought exceptions that would allow this practice, since they were confronted with a reality in which religiously observant people commonly turned to foreign courts.

Contemporary religious authorities, including some Religious Zionists, generally have a negative attitude toward the Israeli legal system. Their position is based on ancient Jewish law, but is also nourished by a grand vision of reviving Torah law in the Jewish state. Despite the admonition of these authorities, however, the religious Zionist community continues to flock to Israel's secular courts en masse. Given the stark contrast between theory and practice in this case, the position of the religious authorities takes a heavy toll on the religious community - religiously, educationally, and socio-nationally. Is this price justified? Should the tradition of religious adjudication that grants de facto recognition to non-Jewish courts be continued? These questions and more are explored in this study.

The religious public's attitude toward the legal system in Israel is strained and at times confrontational. This tension and conflict stem from the normative gap between secular law and halakha (religious law), as well as the ideological divide between religious and secular-liberal values.

The sense of estrangement from the legal system is growing in the face of court rulings on matters of religion and state. The judges - who for the most part hold secular-liberal views - form their positions and rulings on these issues in accordance with their worldview. The religious public considers these aggregate rulings to be an organized campaign by the legal system against the Torah.

This conflict is intensified by the negative attitude toward "foreign" legal systems reflected in halakha. Although halakha recognizes non-Jewish law, it designates courts that base their rulings on this law as illegitimate institutions and, therefore, it is strictly forbidden to appear before them. Similarly, halakha has difficulty recognizing the courts of the State of Israel, which base their rulings on laws that are not those of the Torah. The fact that Israeli court judges are Jews does not mitigate the conflict. On the contrary, some halakhic decisors maintain that a legal system whose judges are Jewish, but whose laws are not based on Jewish law, is reprehensible and worse than a judicial system whose judges and laws are non-Jewish.

This policy paper seeks to present current trends in the halakhic sphere with regard to a legal system based on foreign law and not on Jewish law. Friction, or outright conflict, between Jews who observe halakha, on one hand, and secular legal systems, on the other, is a very common reality. In fact, it is a daily occurrence, which halakhic scholars have recognized since the inception of the Oral Law: The Tanna'im (sages of the Mishna, c. 30-200 CE) addressed the Jewish attitude toward the Roman legal system in Eretz Yisrael; the Babylonian Amora'im (the sages of the Gemara, c. 200-500 CE) implemented various measures to cope with petitions submitted by Jews to courts that based their deliberations on local law, in this case, Persian; and their successors, the Ge'onim of Babylonia (the presidents of the two great rabbinical academies in Babylonia, c. 589-1048), dealt with the Islamic courts.

Subsequent generations - the Rishonim (rabbinic authorities of the 11th to 15th centuries) in Spain and Ashkenaz, and the Achronim (rabbinic authorities who lived after the writing of the Shulkhan Arukh in the 16th century) primarily in Europe and North Africa - also frequently confronted this issue. Thus, a wealth of knowledge and experience has been accumulated over the generations from which it is possible to derive a variety of rulings that also apply to the current confrontation between the religious public and the legal system of the State of Israel. All of these are discussed in the first section of the study.

Beginning with the third chapter, we examine the positions of present-day halakhic adjudicators regarding the status of the courts in the State of Israel. These scholars bring a complex, sophisticated body of knowledge and material, considerations, and values to their work, which includes addressing religious rulings that condemn in the harshest of terms litigation in courts that do not render judgments on the basis of Jewish law. Intertwined with these rulings, however, is a more lenient tradition, which took note of the vast numbers of people who were turning to the secular courts (referred to in halakhic literature as erka'ot shel goyim).

The response to this procession of the masses was not to turn a blind eye nor raise a voice in protest or despair (though the latter did occur). Many halakhic decisors, each in their own time and place, invested considerable effort in finding exceptions that would make it possible to maintain the shameful practice of appearing before non-Jewish courts. In terms of halakha and principles, these scholars' opinions of the courts in question were resoundingly negative. Nonetheless, their responsibility to the Jewish people spurred them to pursue halakhic solutions that would permit a Jew to turn to a gentile judge and foreign law.

Yet apart from the stringent rulings and the tradition of more lenient judgments, there is also a grand vision of restoring the judges of Israel and the laws of the Torah to their former status. Unlike in previous generations, this vision is grounded in the reality of a reemergent Jewish state. This complex "baggage" confronts contemporary scholars, in particular the Zionists among them, with a difficult decision. In practice, most of them choose the path of rejection: The courts of the State of Israel are considered "gentile courts." It is forbidden to appear before them, and an individual who does so is viewed as someone who insults, blasphemes, and rebels against the Torah. This resolute stance is faithful to the vision of a state based on Torah. Accordingly, the rejection of the State's courts is not rejection for the sake of rejection; rather, its purpose is to hasten the development of halakha and to enhance the glory of the Torah.

But does this rejection indeed achieve these goals? In the early, formative years of the State, this vision was realistic and its goal was attainable. With the passage of time, however, the continued opposition to the State's legal system is not bringing honor to the laws of the Torah. Realistically and politically, halakha is not a genuine alternative to the secular legal system of the State. A decisive majority of the public and of those who hold office in the government or judicial system do not even consider it a possibility. Indeed, such an eventuality is unrealistic.

In order to serve as the legal system of a modern state, halakha would have to undergo numerous processes and modifications of various kinds. In the meantime, sixty years of rejecting the State's legal system has not strengthened halakha or brought it closer to this goal.

At the same time, rejection of the State's courts has exacted a heavy toll on the "clientele" of halakha - religiously, educationally, and in the social-national sphere. The religious cost stems from the gap between the pronouncements of the halakhic adjudicators and the behavior of the masses. The latter continue to flock to the State's secular courts, thereby showing their utter disregard for the admonition against doing so. Thus, an attitude of alienation and apathy is emerging with respect to the halakhic position on secular courts. True, we are talking about a specific halakha and a circumscribed reaction. Yet taken together with the response to other problematic rulings, a lasting, all-encompassing attitude of rejection or indifference toward halakha and its adjudicators is liable to develop.

An additional toll in the realm of education is combined with the religious cost. Religious-Zionist youth today are receiving a double message: One voice - that of values - expresses support and admiration for the courts and their judges who defend justice and are charged with upholding the ideals of honesty and democracy. Another voice - the halakhic - rebukes those who make use of the secular courts, and denounces the judicial branch for deviating from Torah law and for being part of a secular system (erka'ot shel goyim). These contradictory messages create uncertainty and confusion with regard to both the halakhic and the value-based messages.

This leads to an additional cost on the social-national level: It is hard to expect a negative attitude toward the courts to remain limited to a particular area. The rejection of a branch of government as central as the judiciary creates an oppositionist attitude toward the State and its institutions. According to the traditional philosophy of religious Zionism, such a position is ostensibly undesirable. Moreover, it is liable to engender rifts and polarization between religious and mainstream Zionists. The last toll - the social-national one - has taken on particular significance in recent years in light of the upheaval and confusion in the religious Zionist camp regarding its attitude toward the State and its agencies.

Repudiation of the courts and their dismissal as erka'ot shel goyim is, thus, a harsh choice that entails many heavy costs. Such a course, as a strategy or tactic, may have borne fruit during the first years of the State's existence; but that window of opportunity is closed, or more precisely, hermetically sealed. It may reopen, but in the meantime, this persistently negative approach is taking its toll. Therefore, a different course - a positive one - is in order. The legacy of more lenient halakhic rulings permitted the legitimization of the courts of the State of Israel. A halakhic tradition that sought and found ways to permit Jews to petition the foreign courts of non-Jews in the Diaspora in the past must now approve the courts of Jews in Israel.

Dr. Yitzhak Brand is a senior lecturer in Jewish Law at the Faculty of Law of Bar-Ilan University and teaches Talmud and Jewish philosophy in a variety of Beit Midrash programs.