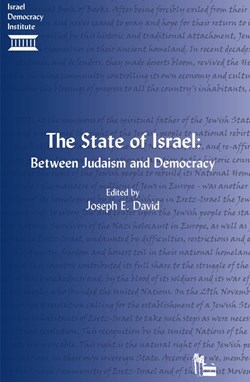 The State of Israel: Between Judaism and Democracy

A compendium of interviews and articles on the definition of the State of Israel as a "Jewish and democratic state." Does the duality of this concept reflect a belief that synergy and harmony between these two identities is possible? Or does it recognize that there is a dialectical tension between the values of Judaism and the foundations of democracy, and hence an existential struggle?

This compendium brings together a collection of thoughts and viewpoints that seek to describe and define the identity and character of the State of Israel through scrutiny of the expression "a Jewish and democratic state."

What significance derives from a definition of the values of Israel as democratic and Jewish? What is the quality of this duality that couples Jewish values and democratic values? Does it suggest a desirable synergy and thus demonstrate a belief in the possibility of harmony between the two? Or is there a recognition of the dialectical tension between the values of Judaism and the foundations of democracy, and hence a promise of existential struggle?

This collection of interviews and articles appears in the midst of protracted and heated debate over the identity of Israeli society. It brings together a broad spectrum of views and perspectives, interpretations proposals and challenges to the expression "a Jewish and democratic state." It does not claim to encompass everything that has ever been said on the subject, nor does it claim to represent every stance adopted. What we hope it does is to encourage, and provide the tools for, discussion on the cultural, historical, and ideological levels of the significance of the State's definition of Israel as "a Jewish and democratic state."

Joseph (Yossi) David specializes in Halakhic Thought in the Jewish Thought Department of the Hebrew University of Jerusalem. He also lectures on Jewish Law and Philosophy at Haifa University and is a research fellow at the Israel Democracy Institute.

1. Anita Shapira – Agreement on the Limits of Disagreement
2. Israel Meir Lau – A Jewish State by Democratic Means
3. A.B. Yehoshua – An Israeli State
4. Ya'akov Katz – Tradition and Modernity
5. Menachem Brinker – A Democratic State: Form and Content
6. Aharon Lichtenstein – On Halakha, Humanism, and the Rule of Law
7. Asa Kasher – A Democratic State of the Jews
8. Yoel Ben-Nun – The Separation of Authorities as a Religious Ideal
9. Gershon Shaked – Democracy and Jewish Dominance

10. Haim Cohn – The State of Israel and the Status Quo
11. Yitzhak Ben-Aharon – Religion and State: The Individual and the Community
12. Shalom Rosenberg – Democracy and Halakha: A Philosophical Perspective
13. Joseph Agassi – Israel: A State Governed by Rule-of-Law or Rule-of-Arrangement?
14. Aviezer Ravitzky – A Jewish and Democratic State: A Normative Perspective
15. Avigdor Levontin – Jewish and Democratic: Some Personal Reflections
16. Ruth Gavison – Democracy and Judaism: Between Conceptual Analysis and Public Discourse
17. Benyamin Neuberger – Israel: A Liberal Democracy with Four Flaws
18. Sammy Smooha – The Nation Before the State
19. Azmi Bishara – The Sovereignty Process is Not Yet Complete