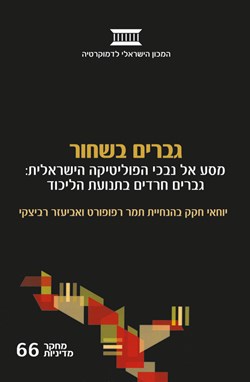 This study focuses on Haredi activists and their integration into the Likud movement—an important and central secular movement in Israel, which is the last years has absorbed many Haredi members. The paper explores the connection between this phenomenon and deeper phenomena in the Haredi community, such as the development of internal critical conversation and the demand for more equality and democracy.

This study focuses on Haredi activists in the Likud movement. It begins by examining some of the social processes that are essential for our understanding of Haredi affiliation with the Likud party. One main process is the deteriorating 'solidarity' within the Haredi faction which allowed for the distinct identities of Haredi sub-groups to be emphasized. This process has weakened traditional sources of power within Haredi society and contributed to the decline in the status of rabbis who claim to speak in the name of Torah (da'at Torah). Another cause of the waning power of traditional sources has been the increase in critical discourse within this society in recent years. An additional principle fueling this offensive has been the 'generational decline' (yeridat hadorot); the undermining of this principle has contributed to reduced legitimacy of the traditional division of power.

This destabilization of the traditional power bases, along with the emergence of new ones, has led to the formation of a somewhat more equal and democratic Haredi society. Entering the Likud movement can be regarded as part of this trend. Most of those who have joined the Likud are on the social margin of the Haredi faction, in contrast to those who are affiliated with the Haredi parties, most of whom belong to the elite. Thus, affiliation with the Likud has contributed to a more evenhanded distribution of social power within Haredi society.

These developments, which constitute the background for affiliation with the Likud movement, are accompanied by the process of emergence from the protected Haredi environment into the wider Israeli milieu, a trend to which economic and demographic factors have contributed.

This study will prove that, despite the fact that in many aspects Haredi activists in the Likud deviate from the demands of the Haredi cultural model, in many other aspects this model continues to mold their behavior, mind-set, and perception. Thus, for example, I will show how according to this way of thinking, the individual represents the word of God and the community, activists are obligated to behave according to a strict set of rules, and their consciousness and their fields of interest are therefore molded. The centrality of the community and its manifold ties are revealed as an important resource on the way to political involvement. The 'Haredi-ness' of these activists can also be considered a resource because it enables them to serve as a bridge to the Haredi public, which the Likud movement regards as a pool of potential voters. Further in this study I will explore how different activists ('Litvaks,' Sephardim, and Hassidim) cope with the hazards facing them as they enter a political arena that lies beyond the protected confines of the Haredi milieu.

The Haredi activists put forward a variety of motives and reasons for their involvement. Many of them give personal motives as their incentive. Others emphasize their commitment to the material needs of the Haredi community. Yet, some of them describe their political involvement as spiritual calling. They also occasionally mention a desire to protect the Haredi Torah world, or improve the standing of religion in the State. As of yet Haredi involvement in the Likud has not been officially sanctioned by the rabbis, but there have been indications in Haredi society of a developing awareness of the sanctity of the State and its institutions, including the political arena.

According to traditional Haredi thinking, non-Haredi political leaders are motivated by personal intent. In contrast, politicians in Haredi parties are seen as subjugating their own interests to the wishes of the Almighty. Haredi activists within the Likud mainly reject this perception of Haredi politicians and severely criticize the way they are being treated. At the same time, many of them are to some degree ambivalent, due to their religiosity and world view. The effect of the Haredi cultural model and the hierarchical distinctions between the spiritual world and the material world also impacts the political arena, as can be seen from those interviewed. They distinguish between the work of the Knesset which focuses on legislation, that is, laying down principles, and serving a government which focuses on corporal activity and change. Others describe political involvement as 'dirty' and prefer to function as consultants, behind the scene, without 'dirtying' themselves in the political limelight.

The last part of my study is devoted to my claim that political involvement exposes activists to a new model of masculinity: the man who works to change the tangible reality that lies beyond the walls of the Beit Midrash. Some activists described their encounter with this model as an amazing discovery, and it would appear that at least some of them fervently embrace it. Another change reported by some was the feeling that they lost their naiveté when they encountered the non-Haredi, competitive society that functions according to different norms. Young Haredi men who participate in Likud activities are exposed to new influences. Involvement in the Likud also constitutes a position of power. It allows those on the social periphery to return to the Haredi setting in a stronger position, after having been close to positions of power and influence. It allows them to stand up for themselves more firmly, gain legitimacy for their way of life, and in this way generate change within the Haredi milieu as well.