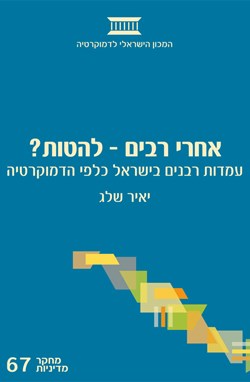 This policy paper examines the attitudes of prominent rabbis in the ultra-Orthodox and national-religious communities in Israel towards democracy. Its premise is that even if not everyone in the religious community follow their edicts, the rabbis are the most important “ideological indicators” of religious society as it relates to democracy.

The fundamental tension between religion and state is most notably articulated in the tension between religious Jewish law (Halakhah) and democracy. Democracy assumes a majority rule, while Halakhah is based on religious truth, with a supposed value higher than that of a human decision, even one reached by a majority. In a democracy where the majority of the public is secular and basic assumptions are liberal, the dilemma that arises focuses most intensely not only on the question of the source of authority, but also on the content, that is, religious values in contrast with liberal values.

This policy study examines the attitudes of prominent rabbis in Israel, in the ultra-Orthodox and national-religious communities, towards democracy. The premise is that, even if not everyone in the religious community follow their edicts, the rabbis are the most important “ideological indicators” of religious society as it relates to democracy.

It is important to emphasize that in the world of Halakhah, there is almost no resistance to the formal premises of democracy, that is, electing a government by the people and decision-making by majority rule. This fact is frequently employed by those speaking on behalf of the religious camp in order to assert that there is, so to speak, “no contradiction” between Halakhah and democracy. However, such a conflict exists not on a formal level, but on a substantive one, in the liberal values of Western democracy and the issue of a liberal-secular majority’s right to design policies which clash with the approach of Halakhah. Accordingly, this study emphasizes not only the way in which the rabbis relate to the abstract concept of “democracy,” but also clarifies their treatment of three specific issues which hold the most potential for discord: the treatment of secular legislation and the legal system, the status of non-Jews in Israeli society, and the status of women.

The research methods adopted in this paper are varied: all the rabbis to whom the study refers were asked to be interviewed in order that their positions on the researched topics be understood directly. I am grateful to those who agreed, although there were those who refused.

This study does not include non-Orthodox rabbis, not because of a value judgment, but because their status in Israeli society is too marginal and they wield no real public influence. The number of rabbis from the national-religious stream participating in the study is striking in comparison with the minority of ultra-Orthodox rabbis. The reason for this is that the ultra-Orthodox viewpoint holds that democracy is not perceived to be a value at all; its world consists solely of Halakhah. Thus, among ultra-Orthodox circles there are almost no variations and nuances in the discussion on democracy, and their absorption with the two prominent ideologies of this stream (those of Rabbi Ovadia Yosef and the late Rabbi Eliezer Schach) is sufficient for comprehending the worldview of the entire ultra-Orthodox camp on this issue. In contrast, the national-religious stream perceives the state and democracy as having value, and therefore has produced a variety of approaches seeking to reconcile and strike a balance between their relationship to the state and democracy, and their halakhic obligations. As a result, this study deals with a range of rabbis from the national-religious stream, each with his own unique worldview. It should be noted that the study deals only with rabbis currently serving and holding a leadership role, with the exception of the late Rabbi Schach. I chose to include him in the study as a result of the dominance of his personality and worldview in the ultra-Orthodox community even now.

There are two key conclusions arising from the study. First, the rabbinic world finds it difficult to accept all the basic premises of liberal democracy as they are. However, in comparing the tension among the three specific issues examined, it transpires that the greatest disparity between the rabbinic outlook (especially with regard to the rabbis in the national-religious stream) and the liberal outlook may be pinpointed in the issue of non-Jews in Israel. The reason for this, it appears, is not halakhic, but social: rabbis from the national-religious stream have concentrated on “right-wing” politics during recent decades (which, inter alia, translates into a suspicious, and even hostile, relationship with the Arab minority) at a time when they have attempted to minimize their differences with the remaining sectors of the populace on other religious issues. Moreover, the overall Jewish-Arab conflict has granted the rabbis more legitimacy, enabling them to take a non-liberal position regarding the issue of treatment of non-Jews, in contrast to their positions on other matters.

The second conclusion is that it is specifically those rabbis who grew up in a Westernized culture abroad (such as Rabbi Nachum Rabinowitz and Rabbi Aharon Lichtenstein) who tend to legitimize the concept of “religious disobedience” (the refusal to accept government rulings and directives which contradict Halakhah) rather than their colleagues who were born in Israel, even those who are clearly right wing. The reason for this, it appears, is that the national Zionist approach, with which those born in Israel were raised, greatly favors national unity, whereas the Western-liberal approach with which the rabbis who were born abroad grew up, is prepared, from the outset, to afford a greater allowance to an individual’s conscience. This explanation is enhanced by the fact that the interviews for this study were conducted prior to carrying out the disengagement plan and removing the settlements in the Gaza Strip and northern Samaria. In the spirit of those voices heard during the course of implementing the plan and its aftermath, the willingness to adopt “religious disobedience” may have increased among some of the rabbis from the national-religious stream who were born in Israel as well.

The summary chapter of this study also includes a topological categorization of the rabbinic positions according to five topics: the ethical relationship to democracy – between substantive obligation and substantive negation; the character of democracy – from ethnic democracy to liberal democracy; the relationship with the legal and legislative system – between those who minimize conflict and those who espouse its expansion and emphasis; the treatment of non-Jews – between equal rights and revocation of the civil status of non-Jews; and the treatment of women – between those who believe in complete equality and those who favor a clear distinction between genders.

In each of these five subjects, I discovered an array of opinions, not just two extremes. With regard to certain rabbis it was only possible to correlate between their attitudes on one subject vis-à-vis another. Many demonstrated no correlation between the extent of their affinity to liberal discourse in one area and the extent of their affinity to such discourse in other areas.

This topology and this study in general do not exhaust the discussion on rabbinic discourse on the issue of democracy.  It is my hope that this study will contribute to the deepening of the discussion and study of this important matter, addressing the core clash of forces of Israeli identity – the Jewish-traditional ethos and the Western-democratic ethos.

Tags:
The Rabbinate,
democracy,
religion and state,
Religion and State