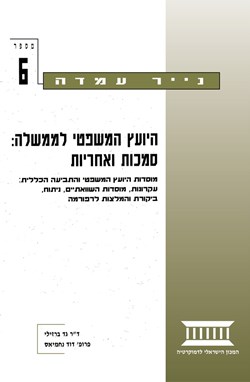 The first of three papers from a comparative study initiated by the Israel Democracy Institute regarding Israel’s Attorney General, the Bank of Israel, and the State Comptroller.

Dr. Gad Barzilai of Tel Aviv University and Prof. David Nachmias, a senior fellow at the Israel Democracy Institute, have published, within the framework of a comprehensive study of the institutions of Attorney General, Governor of the Bank of Israel, and State Comptroller in Israel as well as other countries, the current study as part of the Institute's series of position papers. The first chapter of the study is concerned with the comparative aspect of the institution of legal counseling in Europe and in the United States. A methodical comparative analysis indicates that various characteristics of legal counseling, as well as methods of appointment to such positions, exist in different parts of the world. In the United States, for example, the Attorney General is also the Minister of Justice, and in Australia legal counseling is divided between among government offices. Despite the wide variety of legal advisory institutions, however, the study manages to focus the readers on several variables of particular significance. In most European countries, for example, an institutional separation exists between the State Attorney and legal counseling. The development of legal advisory institutions in democracies is explained by the historic developments within the modern nation state. These developments led to the evolution of legal advisory apparatuses which sanctioned the state's actions and failures.

The authors of the study recommend a series of original and substantial reforms. These include the need for a division between the institution of Attorney General and the State Attorney, whose interest lies in the implementation of the criminal code. The methods of appointment of the Attorney General require substantive reform, and the authors recommend a thorough change in the methods of appointment and impeachment. They assert that a certain degree of intervention by the Knesset in these procedures should be secured. An additional recommendation of significant importance is the termination of regular participation by the Attorney General in government meetings. It is the opinion of the authors that this participation may significantly damage the effectiveness of legal counseling.

Summary: Barzilai and Nachmias suggest, for the first time, a comprehensive discussion of the legal and social status of the Attorney General and the State Attorney from a political and legal standpoint.