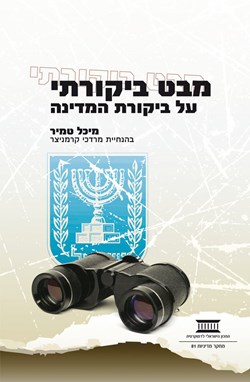 The State Comptroller: A Critical Look

The institute of the State Comptroller arouses debate in Israel as to the precise boundaries of the office's authority and its proper fields of inquiry. This policy paper examines the issue, looks at models around the world, and recommends distinguishing between the Comptroller's oversight of efficiency and the Attorney General's purview of determining legality.

The institute of the State Comptroller arouses fierce debate from time to time, as to the precise boundaries of the office's authority and its proper fields of inquiry. IDI's Dr. Michal Tamir and Prof. Mordechai Kremnitzer examine the issue, look at various models around the world and recommend that a clear distinction be made between the Comptroller's oversight of efficiency and the Attorney General's purview of determining legality.

The relationship between Parliament and the State Comptroller differs from country to country; the differences between the various models are rooted in historical, political, and cultural variables. Despite the differences, all state audit institutions endeavor to find a balance between the independence of the auditing task, the purpose of which is to ensure objectivity and trustworthiness, and an effective relationship with parliament, which has the job of ensuring that the audit reports receive proper consideration by the executive authority.

"As Ombudsman for public complaints, the State Comptroller, like the courts, is concerned with efficient justice. Like us, he makes decisions independently and is subject to no other authority than the authority of the law. He carries out his task with integrity, objectivity, and a sense of the mission assigned to him. Both the court and the Ombudsman consider solutions to disputes between the individual and the authority. We are not in competition. We are not envious of you. On the contrary, we would be happy if you conducted more detailed and extensive audits, and solved the problems that would overwhelm us if left unresolved. The two institutions - the court and the Ombudsman's office - work to impose the law. We do not compete with each other; we complement each other."

Is this really the case? Is there really no competition but only completion? In order to examine this question, it is necessary to consider the position of the State Comptroller, both as Comptroller and as Ombudsman. First and foremost, the characteristics of the two constitutional authorities - the judicial authority and the State Comptroller - must be examined. These two authorities conduct an external and independent review of governmental action, criticizing it and charting norms to guide its implementation.

This book recommends that the responsibilities of the governmental authorities be distributed in the following manner:

With regard to the State Comptroller and the courts: the proper relationship between the scope of the matter being considered and the degree of obligation to act in accordance with the audit must be reversed. The Comptroller's Office is an institution that oversees a broad range of issues as opposed to the court, which deliberates only on matters presented to it. Judicial review only deals with the legality of governmental decisions that are brought before the court, while the State Comptroller handles a broad range of questions that focus on all the bodies and issues he or she chooses to examine. This relationship must be reversed with respect to the results of the examination: a determination of illegality (including a deviation from the margin of reasonableness or proportionality) could lead the court to invalidate an administrative act. On the other hand, as soon as the Comptroller has submitted a report, the results are no longer in his or her hands, and the baton must be handed over to the other authorities. The executive authority must implement the recommendations of the Comptroller; the State Control Committee of the Knesset is required to examine their implementation; the Attorney General must explain to the authorities how their legal status is affected; and the courts must conduct a judicial examination of the criminal matters that the Comptroller has turned over to the Attorney General, after the Attorney General has made the decision to prosecute. The courts are also required to deliberate in cases in which it is asserted that the failure to implement the recommendations has made an action illegal.

Another recommendation is that the law establish arrangements, such as those prevailing in Australia, that will confine the Comptroller to examining systemic issues, as well as matters of principle, and not individual events or specific individuals (for example, he or she should consider the policy of wiretapping and not a particular instance of wiretapping). Of course, the distinction between a specific issue and a general issue is not clear-cut and is open to interpretation. There are topics that by their nature require a particularistic examination, such as the examination of integrity in a specific incident, or the examination of the legality of a specific tender.

The determination that the State Comptroller's Office should become an independent institution within a parliamentary framework, with an accent on its inquisitorial nature, will influence other conclusions as well. Thus, for example, this book addresses the customary, basic rule of the past, according to which the identification of personal responsibility was not considered the State Comptroller's function; in other words, the audit was directed at systems and bodies, and not at individuals. As the most recent State Comptrollers have established a policy that does not preclude personal responsibility and personal conclusions, questions arise as to the fairness of the process, particularly in so far as concerns the obligation to grant the right to be heard, and the extent of this obligation. This book also examines the dilemma between review after the fact, which leaves responsibility for this in the hands of the executive authority and is in keeping with the presumption of legality of administrative bodies, and oversight in real time, i.e., the examination of an act that has not yet been completed or an act that has been completed, whereby it may influence the continuation of the process and the subsequent stages. The advantages of oversight "in real time" lie in the renewed examination of the decision under review, and even in the prevention of delays in its implementation. Another topic discussed in this book is the obligation of the State Comptroller's Office to provide information to citizens, and the nature and extent of this obligation. The principle of anonymity, which asserts that the State Comptroller will not provide the names of individuals associated with bodies under examination, is discussed, as is the legal immunity of the State Comptroller's Office against libel suits.

The recommendations that appear in this book take into account all the accepted norms in other countries, but are based on the unique public and political reality of the State of Israel.