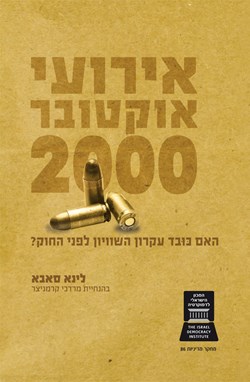 Was the Principle of Equality Before the Law Upheld?

Thirteen Arab Israeli demonstrators were killed in October 2000. The conduct of the Police Investigations Unit and State Attorney in the aftermath of these events forms the basis of this policy paper. Why was a criminal investigation not undertaken immediately following the event that led to the deaths of the demonstrators? Could an investigation conducted three years after the event be effective?

A decade has elapsed since the grave riots that erupted in the Arab sector, in the course of which thirteen demonstrators, Israeli citizens, lost their lives. The events were a watershed in the relations between Israeli Arabs and the State. In their aftermath, by reason inter alia, of police conduct at the time, and the later conduct of the Police Investigations Unit (PIU), the State Attorney's Office and the Attorney General, the Israeli Arab public sensed that the State was relating to it as an enemy. The events of October and their consequences thus accelerated the processes of withdrawal and segregation on the part of the Israeli Arab community.

The outbreak of the riots was an expression of the sense of alienation of Israeli Arabs due to the systematic discrimination and oppression that they had suffered (and continue to suffer) since the establishment of the State. As noted by a number of witnesses during the deliberations of the Or Commission (the State Commission of Inquiry into the Events of October 2000), even before the events of October, "the writing was on the wall." The Arab public's feelings were reinforced and substantiated by the law enforcement authorities' defective treatment of the files of the killed and the injured. Following are some of the main points of this grave operational failure.

The following policy study presents an in depth examination of the Attorney General's decision at its various levels, and details the evidence and the manner in which it was evaluated in three of the thirteen homicide files.

A. Failure in the operation of the law enforcement system

B. Inaccuracies in the opinion of Attorney General Meni Mazuz

C. Closing the three files that we examined was not justified

Despite all of these problems, the Attorney General adopted the State Attorney's recommendations as presented to him, and decided to close the files for lack of evidence.

D. Was the principle of equality before the law upheld?

No one would argue that an indictment should be filed merely to satisfy the public, even in the absence of evidence that would support a criminal conviction. On the other hand, where prima facie evidence indicates the commission of criminal offenses, as in the files we examined, there is an obligation to prosecute. Failure to prosecute in such cases severely undermines public trust in the law enforcement system and in the perception of equality before the law. Failure to prosecute purely on the basis of hypothetical doubt, even in instances where that doubt is not supported by the evidence, means granting immunity against prosecution in any complex file. A law enforcement system that only prosecutes cases that are absolutely doubt-free betrays its duty and violates the rule of law.

In the wake of these findings one can hardly avoid asking whether the authorities would have conducted themselves in the same manner had thirteen Jews been killed in similar circumstances. Might the failure to conduct a timely investigation soon after the events, the decision to investigate at a later stage, and the decision to close the files for lack of evidence be connected to the fact that the allegations of unwarranted and lethal force concerned Israeli Arabs? Can the law enforcement system's handling of Arab rioters during the events themselves be viewed as an expression of "let's teach them a lesson that they won't forget"? Did the defective investigation adopt, or turn a blind eye to such an approach?

There is one other worrying aspect that cannot be ignored. Seven years have passed since the Or Commission submitted its report, yet the majority of its recommendations have not been implemented with respect to the narrowing of gaps between Jews and Arabs in Israel. It is not difficult to imagine the disappointment, the frustration and the alienation from the State that result from such an approach.