Israel needs to abandon the vindictive approach of trying to reform ultra-Orthodox society through force and budget cuts, and rather start investing heavily in education and job creation in the ultra-Orthodox sector. This op-ed was first published in the New York Jewish Week. 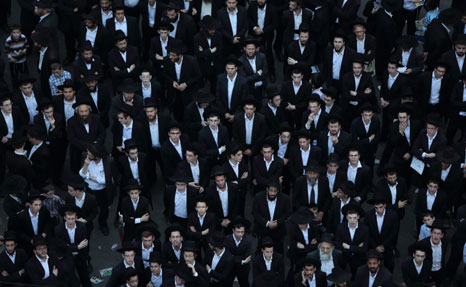 In recent years, a dramatic social, political and legal struggle has been waged against the ultra-Orthodox “society of scholars” in Israel.

This battle has included civic initiatives, such as calling for an equal sharing of the burden by the “parasites” [as charedim are derided for not serving in the army and often living on government subsidies]. In addition, there has been the striking down of the Tal Law (allowing for legal deferment from the military for yeshiva students); the meteoric rise of the Yesh Atid party (with its promise to change the religious status quo); the formation of a governing coalition without the ultra-Orthodox parties; and more. In the end, it proved to be much ado about nothing.

The current government coalition has reinstituted the status quo ante: aspects of the conscription law aimed at the ultra-Orthodox have been significantly diluted; child allowances and subsidies for yeshivas have been restored to their previous levels; and the requirement that ultra-Orthodox schools teach a core curriculum of English, mathematics and sciences in order to receive state funding has just been repealed – before it could even be implemented in 2018.

What was seen as a historic change of the status quo has vanished into thin air. The only surviving achievement: Member of Knesset Yaakov Litzman was forced to accept an official ministerial position — and has emerged as the minister who earns the highest marks from the public.

Could the ultra-Orthodox community's victory been any more complete?

There is an important lesson to be learned here: law and politics are not the appropriate tools for affecting profound change in a large cultural subgroup with its own distinct ethos. As a practical matter, the coercive power of change as dictated from above is weak and of doubtful justification from a liberal, humanistic perspective.

Acceptance of a core educational curriculum, military service, active and productive participation in the labor market—these can occur only as a result of force exerted from below, by the ultra-Orthodox public itself.

Politics and the law have only a limited role to play: to permit the change, support it, and not impede it.

Such change from below is already taking place. Today, about half of all ultra-Orthodox men hold jobs; the number of ultra-Orthodox individuals enrolled in colleges and universities has grown several fold; and the percentage of “modern” ultra-Orthodox families who want their sons to receive a general, and not only Torah, education has expanded.

Yes, ultra-Orthodox politicians’ rhetoric and actions continue to be rigid and entrenched, but the actual situation on the ground points to a paradigm shift that is dominating the discourse in charedi enclaves like Bnei Brak and Modi’in Illit. This change has been gestating inside the ultra-Orthodox community's womb for quite some time now. As such, the role of the state—the Knesset, the government, and the courts—is to serve as a skilled, attentive, and sensitive midwife, removing obstacles to the process as it progresses and expands.

Let's let ultra-Orthodox politicians enjoy the fruits of their recent triumphs. There is no need to enlist the High Court of Justice against this sector or deliver a body blow to it whenever the next political opportunity arises; this will only delay these changes. Some ultra-Orthodox politicians and leading charedi rabbis view such rulings as Heaven-sent.
The midwife needs to facilitate, not force matters.

Going forward, the public purse must be used intelligently. Stingy or generous, the state must act in accordance with an overt and consistent policy that supports integration and is devoid of coercion.

Economic benefits to those who do not serve in the IDF and do not work should be curtailed, on the one hand; but the coffers should be opened to pay for employment-oriented higher educational programs and the promotion of jobs in the ultra-Orthodox sector, on the other.
Rather than reduce the total budgetary outlay for these categories, funds should be distributed in a different fashion than they have been until now. The ultra-Orthodox public will both understand and support this.

We need to invest in schools for ultra-Orthodox children that combine Torah studies with a focus on top-caliber teaching of general subjects, as is the norm in the high school yeshivas that serve the Religious Zionist sector. No doubt, this is expensive and beyond the financial capacity of the average ultra-Orthodox family, which has many children. The best business plan for the Israeli economy and Israeli social cohesion is to direct massive budgets in this direction. The payback would be enormous.

Prof. Yedidia Stern is vice president of research at the Israel Democracy Institute in Jerusalem.

This op-ed originally apppeared in the New York Jewish Week.

Tags:
Ultra-Orthodox,
Education,
Judaism and Democracy,
ultra-Orthodox/Haredi,
The Ultra-Orthodox in Israel,
The Joan and Irwin Jacobs Center for Shared Society