Apart from another look at the national “mood,” the Israeli Voice Index for May focused on two issues: Israel’s foreign relations and international status, and the controversy over the immunity law and a clause enabling the Knesset to override the Supreme Court.

In May a certain decline in the national “mood” was measured manifested in a certain weakening of optimism compared to April regarding both the future of democratic rule and the security situation.

In general, a majority of the Israeli public sees Israel’s international status as good (62%). The majority also believes that signing an agreement with the Palestinians would improve that status (52%).

A clear majority of the Israeli public opposes the immunity law (62%). If it is legislated, only 30% believe it should be applied to Netanyahu.

The public is divided on whether the legal system is too powerful and, hence, the Knesset should be strengthened and the judicial branch weakened (44% agree that this is the case and a change should be made while 36% disagree).

How do you feel about the state of democratic governance/ security situation in Israel in the foreseeable future? (%)

Israel’s International Status at Present and Compared to the Past

About two-thirds of the Jewish public thinks Israel’s international status at present is very good or moderately good; among Arabs, half think so. However, a segmentation by political camp of the Jewish sample turns up large disparities: on the left only 34% view Israel’s status in the international arena as very good or moderately good, compared to a majority in the center (57%) and on the right (74%). 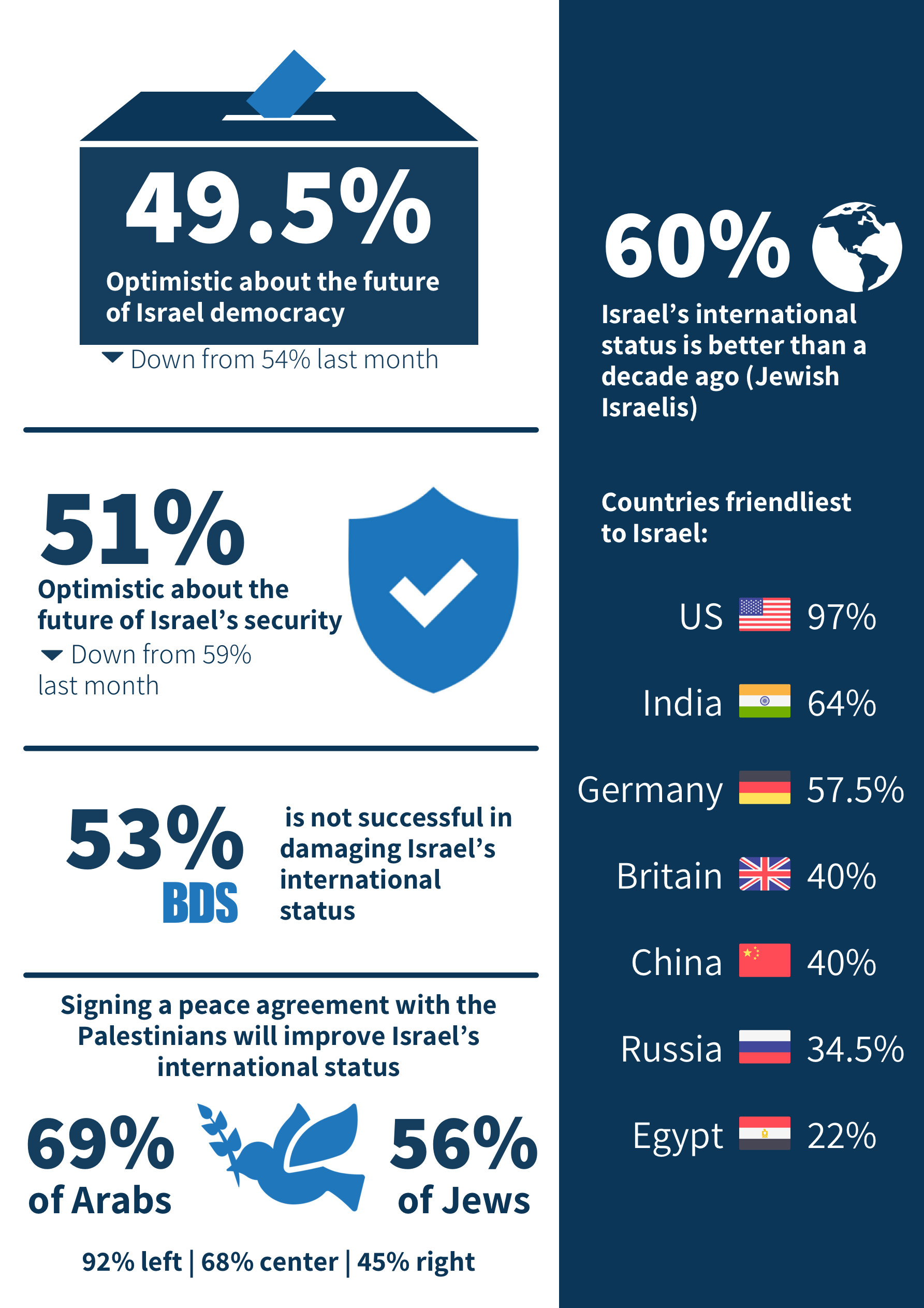 Is Israel’s international status at present good or poor compared to what it was a decade ago, or is it similar? In the Jewish public, the majority (60%) sees its status today as better than it was ten years ago; only 20% think it has worsened. While the rate of Arabs who did not know how to answer this question is too high to draw a clear conclusion, among those who did answer the rate who see an improvement slightly exceeds the rate who perceive a worsening of Israel’s international status compared to the past (35% vs. 30%). Eighteen percent believe that no change has occurred. A segmentation of the Jewish sample shows that on the right, a large majority (71%) believes that Israel’s international status is better at present than in the past, in the center a small majority (54%) thinks so, while on the left only a minority holds that view (24%).

Is Israel’s international status today: better, similar, or poorer than it was ten years ago? (Jews, by political camp, %)

The Countries of the World - Friendly or Hostile to Israel?

“Is each of the following countries, in your opinion, friendly or hostile to Israel?” (Jews, %)

BDS - a Success or a Failure?

It turns out that a majority of the Jewish public as a whole believes that the BDS movement is not succeeding to damage Israel’s international status. At the same time, we found certain disparities on this issue in the Jewish sample. On the left, 43% believe that BDS is succeeding to a very great or a moderately great extent to damage Israel’s international status, with lower rates on the right and in the center (37% and 38% respectively).

“To what extent is the BDS movement (which calls for a boycott of Israel and Israeli products because of the continued occupation) succeeding to damage Israel’s international status?” (%)

“If a comprehensive peace agreement were to be signed between Israel and the Palestinians, would there be a substantial improvement in Israel’s international status?” (Agree, %)

A small majority of the Arab public, compared to a clear minority of the Jewish public, thinks that if Israel were to leave the territories unilaterally there would be a substantial improvement in its international status. A segmentation of the Jewish sample by political camp reveals considerable gaps: while, on the Jewish left, a solid majority (62%) considers that such a move would improve Israel’s international status, among the center and the right only a minority foresees that outcome (center-38%, right - 15%).

Would there be a substantial improvement in Israel’s international status if it were to leave unilaterally - that is, without an agreement with the Palestinians - the West Bank/Judea and Samaria? (Agree, %)

The Question of Immunity and the Supreme Court Override Clause

The efforts of some members of the future coalition to prevent any possibility of putting an elected individual (and Netanyahu specifically) on trial by legislating a revised immunity law, and by weakening the judicial branch with the passing of an override clause - this time not only regarding the judicial branch’s overturning of Knesset legislation but also of administrative decisions of the legislative and executive branches - were the focus of Israel’s public discourse this month. We used a series of questions to gauge the public’s positions on these issues. However, as we will detail below, we wanted to know whether there is public agreement that the Israeli government is now in the same category as such illiberal governments as those of Turkey, Hungary, and Poland, many having made the comparison lately.

Comparing the Israeli Government and the Governments of Turkey, Hungary, or Poland

We asked: “Some claim that in light of the political processes occurring in Israel in recent years, the regime here can now be compared with illiberal regimes in Turkey, Hungary, or Poland. Do you agree with or oppose this claim?” In the entire Jewish sample, only about one-fourth (24%) see validity in this comparison. However, among the Arabs 59% agree that it is valid.

A segmentation of the Jewish sample by political camp shows that on the right and in the center, only a minority perceives any validity in the comparison between Israel and Turkey, Hungary, and Poland (right - 13%, center - 34%). On the left, however, the majority views this comparison as valid (64%).

Support and Opposition to a Law That Would Grant Automatic Immunity to a Member of Knesset against Whom the Attorney-General Wants to Submit an Indictment, according to Voting for the Knesset in 2019 (%)

The Law’s Application to Netanyahu

We asked: “And if the revised law is passed, should it, in your opinion, be applied only to new cases or also to Prime Minister Netanyahu, even though a draft of an indictment, pending a hearing, has already been served against him?” On this question the rate of “Don’t know” was exceptionally high among both the Jews (22%) and the Arabs (28%). Nevertheless, among those who did have an opinion, 47% in both samples said the law should be applied only to new cases, that is, not to Netanyahu. A segmentation of the Jewish sample by political camps showed that, on the left and in the center, a clear majority (81% and 62% respectively) thinks the law, if revised, should be applied only to new cases. On the right, about a third (36%) think so. Even among the Likud voters in the latest elections, less than half think this law should be applied to Prime Minister Netanyahu.

Strengthening the Legislative Branch and Weakening the Judicial Branch

Strengthening the Knesset and Weakening the Legal System (Jews and Arabs, %)