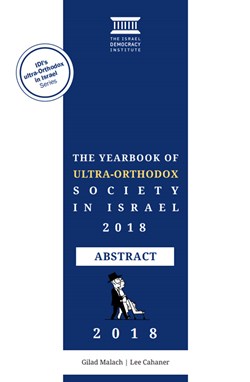 The Yearbook of Ultra-Orthodox Society in Israel 2018

The 2018 Statistical Report on Ultra-Orthodox (Haredi) Society in Israel brings to light many significant changes and trends among the ultra-Orthodox community, including with regard to its participation in academic studies and information on employment conditions.

Recent years have seen a growing concern over what is perceived to be the fragmentation of Israeli society into what President Rivlin refers to as “tribes,” threatening to jeopardize its solidarity and resilience.

The ultra-Orthodox (Haredi) community is often defined as one such a “tribe”, particularly since it has chosen to erect, “walls of sanctity” to separate itself from mainstream Israeli society. This segregation by choice is virtually all-encompassing, extending beyond the beliefs and culture unique to this community, finding expression in residential patterns-separate ultra-Orthodox neighborhoods, in education-separate educational streams, in the political arena, and in the media unique to this community.

For many years, mainstream Israeli society‘s response to this voluntary segregation was indifference and alienation, with only rare peeks beyond the “walls”. The Haredi community was in effect absolved of the responsibilities and obligations shared by other Israeli citizens, this in turn, reinforcing its isolation.

However, in recent years we are seeing an overall trend towards greater integration into the Israeli mainstream, indicated - among other things - by the establishment of a State-ultra-Orthodox educational stream, and by a growing number of Haredi students studying in colleges and universities.

We are pleased to present the 2018 Statistical Report on Ultra-Orthodox (Haredi) Society in Israel, which includes comprehensive and up-to date data bringing to light many significant trends and changes within the ultra-Orthodox community. In addition to subjects presented in previous reports - the Haredi educational system; employment trends; military and civilian service and more - it also includes first time data on areas such as the Haredi community’s standard of living, lifestyle and health. We hope the report will continue to serve as an important source of reliable and comprehensive information for decision-makers, for researchers, and the media, and no less so - for the ultra-Orthodox community itself.

Information on the methodology, definitions of terminology and the complete data set which served as the basis for the report, appear on the Israel Democracy Institute website. We wish to express our sincere gratitude to The Russell Berrie Foundation for their generosity and partnership.