The June 2019 Israeli Voice Index, conducted by the Guttman Center at the Israel Democracy Institute, finds that the majority of the Israeli public does not think the process begun in Bahrain will lead to a peace agreement with the Palestinians, but Israelis do believe that steps towards economic peace can bring stability to the region. 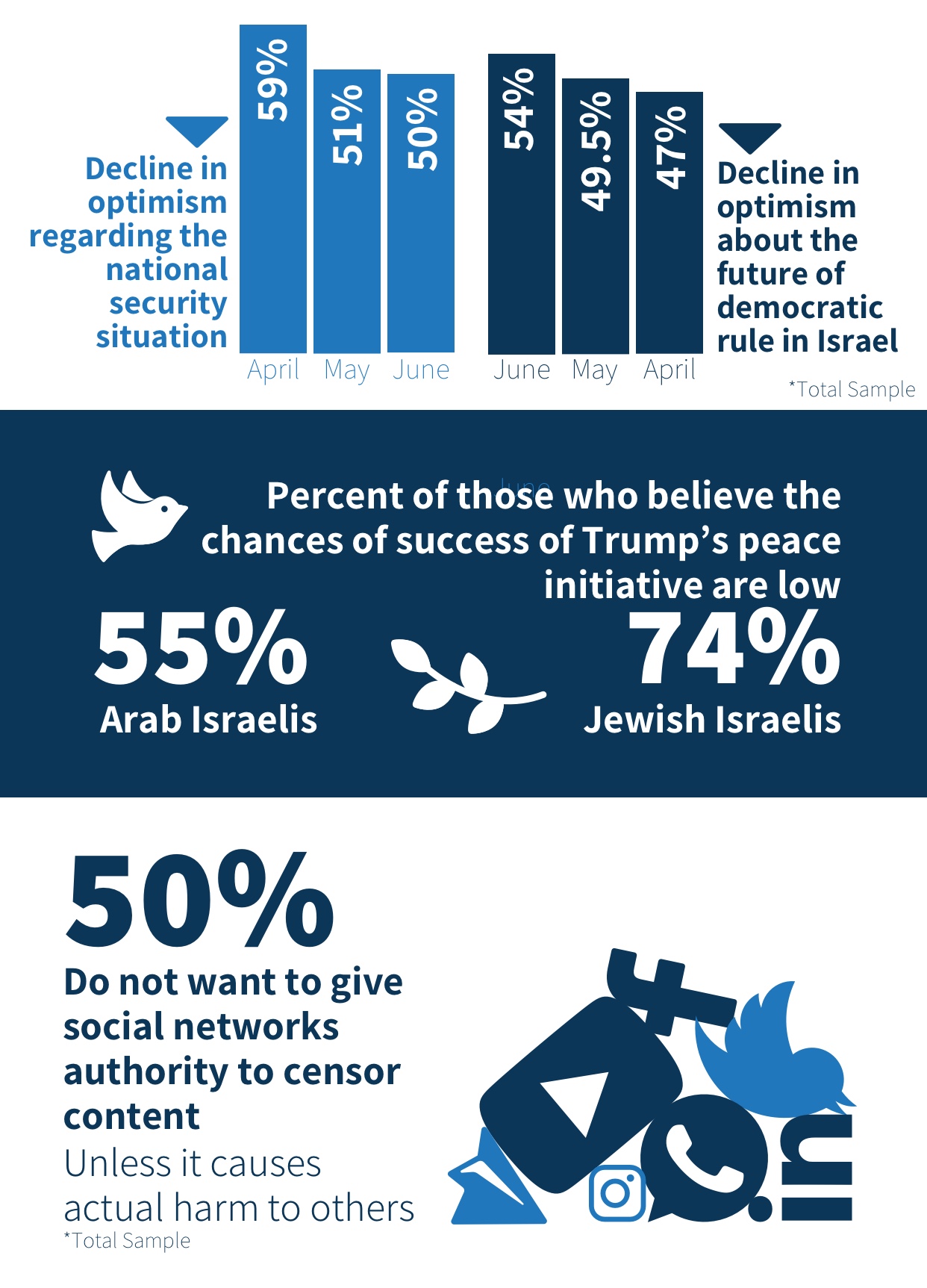 - The decline in the rate of Israelis who are optimistic about the future of democratic rule in Israel continues, and the same holds true regarding the future of national security.

- A large majority of Israeli society thinks that nowadays the Israeli public discourse is more violent and less focused on issues and fact-based than in the past.

- A large majority of all the subgroups also considers that because of the nature of the public discourse, these days people avoid talking about political issues with people who have different opinions from their own.

- The majority of the public would not want to give the social networks the authority to censor items that people post if these do not cause actual harm to others.

- The Deal of the Century – the majority of the Israeli public does not have high hopes that the process begun in Bahrain will lead to the signing of a peace agreement between Israel and the Palestinians. At the same time, a majority of the Jews agree with the idea that the economic advancement of the Palestinians is the key to achieving stability and quiet.

The trend of declining public confidence regarding both the future of democratic rule in Israel and the national-security situation continued this month as well. Because - apart from the Ethiopian protests that occurred after the survey was conducted and could not affect the results - there were no dramatic developments over the past month in the governmental or security domains, the decline presumably stems at least partially from uncertainty about the results of the upcoming elections and from the ongoing war of words between the contestants, who mainly emphasize the failures of the government and of the contestants themselves. Also this month, similar to the previous two months, optimism about the security situation is slightly higher than optimism about the future of democratic rule.

“How do you feel about the state of democratic rule in Israel / Israel’s security situation in the foreseeable future?” (%)

Preferring Democracy to Other Forms of Government

Studies conducted in some countries in recent years point to a decline in support for democracy as the preferred form of government. This decline was found mainly among the younger age groups. We looked into this issue in Israel as well. We asked: “How important is it to you that Israel should have a democratic regime?” A clear majority of the total public (86%) responded that it was very or moderately important to them (88% of the Jews and 75% of the Arabs). Note the high rate of those who chose the “Don’t know” response among the Arabs compared to the Jews.

“How important is it to you that Israel should have a democratic regime?” (%, total public, Jews, Arabs)

We looked into whether there are subgroups with a higher rate of those for whom democratic government in Israel is less important. We found that among Jews defining themselves as right-wing, the rate responding that it is not important to them came to 11%, compared to 5% in the center and 3% on the left. A segmentation by religiosity revealed that the highest rate of those for whom it is not important is found among the haredim, though here too the rate is low in light of the fact that democratic discourse is not prevalent in this population group (15%).

Although a segmentation by age did not turn up dramatic differences, it was interesting to find that for both the Jewish and Arab interviewees, the youngest age group (18-24) was the one with the highest rate of those for whom democracy is less important (Jewish young people - 16%, Arab young people - 12%). Among the young people defining themselves as right-wing 21% said it was not important to them that Israel should have a democratic regime.

We went on to ask: “Is democracy a good system or a poor system for running a country?” A decisive majority (83%) of the total public answered that democracy is a very good or a moderately good system for running a country: Jews - 85%, Arabs - 71% (there was again a high rate of “Don’t know” responses among the Arabs - 17%, compared to 5% among the Jews). Here too the young people are different from the rest: only 75% of those up to age 24 responded that democracy is a good system compared to more than 90% of those aged 55 and older.

A segmentation of the responses to the question by political camp (Jewish sample) shows that, while all the camps indeed take a positive view of the efficiency of democracy, among those defining themselves as left-wing the majority sees it as a very good system for running the country’s affairs while on the right the highest rate regards it as a moderately good system.

“Is democracy a good system or a poor system for running a country?” (%, Jews, by political camp)

We wanted to know whether the public agrees with the claim that nowadays the Israeli political discourse is more fractious than in the past. A large majority of the total public (74%) indeed thinks so (Jews - 77%, Arabs - 63%). Although a majority of all three political camps (Jews) agrees that the public discourse is now more violent than in the past, the gap on this issue between the left and the center on one side and the right on the other is large: left - 90%, center - 88%, right - 69%.

Degree of violence of the Israeli public discourse compared to the past (%, Jews, by political camp)

Among the Jews, the rate who agree that the discourse is now much more violent than in the past is higher than among the Arabs, but this apparently stems once again from the high rate (20%) of Arab interviewees who answered “Don’t know” to this question. And the proof: as the following diagram shows (segmentation by age), except for the highest age group, in all the age groups the rate of Arabs who consider that the public discourse has grown much more violent exceeds the rate among the Jews.

A segmentation by age in the Jewish sample revealed that much higher rates of the older than the younger age groups see the public discourse at present as much more violent than in the past. Among the Arab interviewees it is in fact the intermediate age groups who see it that way in the highest numbers.

The public discourse nowadays is much more violent than in the past (% by age group, Jews, Arabs)

And more on the issue of the public discourse: amid the abundant talk about fake news, we asked: “Some claim that in recent years the public discourse in Israel has become less focused on issues and based on facts. Do you agree or disagree with this claim?” Here too we found a majority agreeing that this is the case, without large gaps between the population subgroups:

“In recent years the public discourse in Israel has become less focused on issues and based on facts” (%, the public as a whole).

Does this reduce some Israelis’ willingness to talk about political issues with people having political views that are different from their own - thereby, basically, limiting the freedom of expression? Among all the population subgroups, but particularly in the Jewish left and center, we found a majority who think that people indeed avoid talking about political issues with others who have different views (total sample - 68%, Jews - 70%, Arabs - 58%, though again the high rate of “Don’t knows” among the Arabs - 21% somewhat distorts the data).

“Because of the nature of the Israeli public discourse nowadays, do people tend more to avoid discussing political issues with people who have different outlooks than their own?”

The social networks are, of course, a hotbed of verbal violence on the one hand and of forming closed groups with like-minded people on the other. We wanted to know whether the public would or would not want the social networks to act as “gatekeepers” so as to curtail the acrimony. We asked: “With which of the following two sentences do you agree more: ‘The social networks must be required to remove statements that can be seen as offensive by certain groups or certain people.’ Or: ‘People should be allowed to write and say whatever they think, as long as it causes no harm to another person or organization.’” A majority of the total public supports allowing people to write and say whatever comes to their minds as long as others are not harmed. The rate taking that stance in the Arab public (57%) is higher than in the Jewish public (48%).

A segmentation of the Jewish sample by political camp showed that, whereas a majority of the left (66%) thinks people should be allowed to write and say whatever they want as long as it causes no real harm to others, in the center and on the right the opinions on this matter are divided. The center is quite evenly split between those taking the two respective positions (45% and 44%), while on the right there is a slight tilt toward allowing people to write whatever they want as long as it does not harm others (42% and 47%).

In the wake of the Bahrain conference where the economic issues were discussed, we wanted to know how the public assesses the chances that President Trump’s peace initiative will eventually lead to the signing of a peace agreement between Israel and the Palestinians. We found that the large majority of the total public (70%) regards the chances of this as small. Interestingly, the rate of Arabs taking that view is considerably lower than among the Jews (55% vs. 74%); in other words, the Arabs are a little more optimistic than the Jews on this issue.

Rating as low the chances that President Trump’s new peace initiative, the economic component of which was recently presented in Bahrain, will lead to peace between Israel and the Palestinians (%, total public, Jews, Arabs)

However, regarding the “economic peace” idea we found that the Jews, much more than the Arabs, ascribe validity to the assumption that the economic advancement of the Palestinians is the key to achieving stability and quiet, even more than withdrawing from territories and signing diplomatic agreements (Jews - 58.5%, Arabs - 38%).

“President Trump’s peace plan for the Middle East is based on the assumption that the Palestinians’ economic advancement is the key to achieving stability and quiet, even more than withdrawal from territories and the signing of diplomatic agreements. Do you support or oppose this idea of ‘economic peace?’ ” (%, agree, Arabs, Jews, and by political camp)

* Two-thirds of the public (66%) agrees that “These days you can’t tell anymore what statement somebody will consider offensive.”

The Israeli Voice Index is a project of the Guttman Center for Public Opinion and Policy Research of the Israel Democracy Institute. In the survey, which was conducted on the internet and by telephone (supplements of groups that are not sufficiently represented on the network) from June 30 to July 2, 640 men and women were interviewed in Hebrew and 154 in Arabic, constituting a representative national sample of the entire adult population of Israel aged 18 and older. The maximum sampling error for the entire sample was 3.7%± at a confidence level of 95%. The fieldwork was done by the Rafi Smith Institute under the direction of Rafi Smith. For the full data file see: https://dataisrael.idi.org.il/