Two weeks to the elections Jewish Israelis show a strong preference for a unity government while Arab Israelis prefer a center-left wing government led by Gantz. Also over the past five months there has been a steady decline in the public’s optimism about the future of Israel’s democracy and security.

* Less than half the interviewees believe strongly or moderately in the propriety of the Israeli elections, a sharp decline compared to the rates before the April elections and immediately after them. The gap between the actual vote and reported results of the elections is attributed mainly to double voting and to manipulations by the local election committees.

* The group in the Israeli public that would prefer to annex Area C, if President Trump were to give it a green light, is larger than the group that would oppose doing so. The Jewish public is divided on the question of whether it supports or opposes establishing a Palestinian state in the areas under Palestinian control if Area C were to be annexed to Israel. 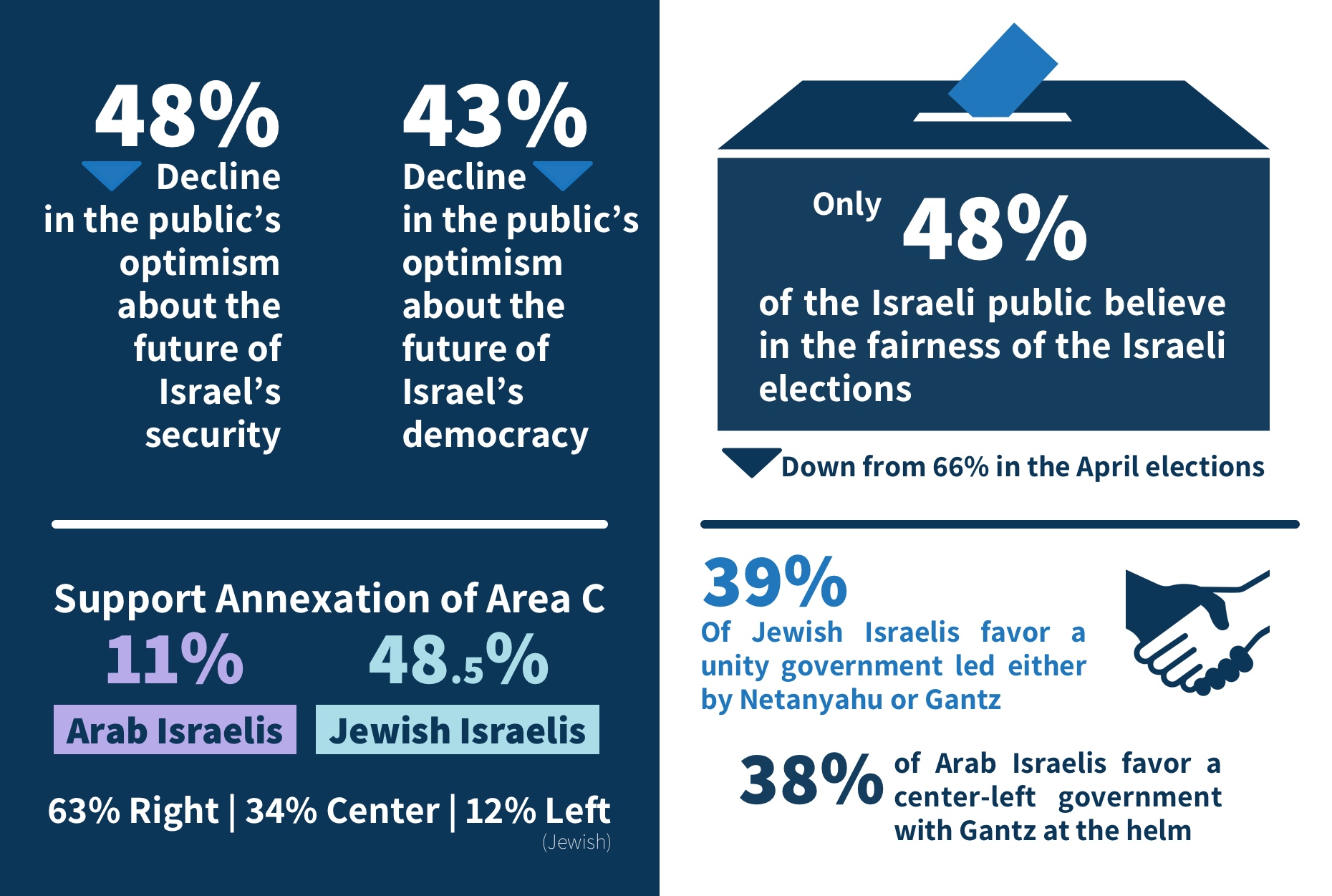 The downward trend in optimism about the future of Israeli democracy continues for the fifth month. In this regard only 43% of the entire sample (45% of the Jews and 31% of the Arabs) views the future with hope. A segmentation of the Jewish sample by political camp points to a majority, not large (58%), of optimists on the right and a minority of optimists in the center (31%) and on the left (17%).

Regarding the future of Israel’s national security, the rate of optimists in the entire sample declined this month for the first time to less than half (48%), presumably influenced by the growing tension in the north and the ongoing tension in the south. Among the Jews, half are optimistic; among the Arabs, about a third. A segmentation of the Jewish sample by political camp again turned up a majority of optimists on the right (59%) and a minority who are hopeful in the center and on the left (center – 37%, left – 39.5%). In all three camps there is a slightly higher rate of optimists about security than about the future of democracy in Israel.

Figure 1: “How do you feel about the state of democratic rule in Israel / the state of Israel’s security in the foreseeable future?” (Entire sample, %)

Toward the September Elections

Perhaps because of the Joint List’s return to the arena, the rate of Arab interviewees who testified to being more interested in the upcoming elections than in the previous campaign exceeds the rate of Jews who said the same about themselves (Arabs – 23%, Jews – 16%). However, in both publics the highest rate reported less interest in the imminent elections.

A segmentation by voting for the Knesset in the April elections indicates that a higher rate is following the September elections on the right than in the center or on the left, with both of those camps showing apathy (or despair?) about what the future holds in store.

Figure 3: To what extent do you or do you not have trust in the propriety of the Knesset elections, that is, that the results to be announced will accurately reflect how the public voted? March and August 2019 (%, Entire sample)

In response to the question of what defect creates the gaps between the actual vote and the official results, the highest rate said it was double or forged votes (30.5%); in second place – skewed counting in the local ballot-box committees (27%); in third place – threats to voters (14%); in fourth place – skewed counting in the Central Elections Committee (12); and in fifth and last place – involvement by people outside of Israel (11.5%). This ranking of the reasons for the impaired propriety of the elections is similar to the rankings obtained in March and in April, with a certain increase in the rate of those assigning the problems to the local ballot boxes.

Of significance here is the very high rate – more than one-fourth – of the Arab interviewees who chose the “Don’t know” option as an answer to this question. When these are added to those who chose the answer “None of them” (41.5%!), the situation that emerges is one of profound alienation from the impending elections among the Arab public.

Figure 4: Which government would you want to be formed after the elections? (%, Jews and Arabs)

The riddle of Lieberman – We wanted to know to what extent the claim, voiced by some on the right, that Avigdor Lieberman has moved from the right to the left has seeped into public opinion. So the interviewees were asked to locate him on a scale in which 1=left, 3=center, and 5=right. It turns out that about one-fifth of the respondents (19%) locate him at present on the left (grades of 1+2) and about the same rate situates him in the center (grade of 3). The highest rate (apart from those who don’t know) puts him on the right (grades of 4 and 5).

A segmentation of the Jewish sample’s responses by political camp provides an interesting picture. Among those who intend to vote for Lieberman in the upcoming elections, the large majority (83%) locates him on the right (17% in the center; no one assigns him to the left). Although with different rates, the same is true of all three political camps (Jews), indicating that the attempt to push him to the left in the eyes of the potential voters from that camp has succeeded only to a limited extent.

Avigdor Lieberman repeatedly says that his party will join only a unity government based on the Likud and Blue and White parties. We wanted to know whether the public believes him or does not believe him. It turns out that the majority (54%) does not believe these statements by someone recently, and frequently, depicted as holding the fate of the elections in his hands.

Figure 6: Avigdor Lieberman states repeatedly that his party will join only a unity government that is based on the Likud and Blue and White parties. Do you believe him or not believe him? (%, Entire sample)

In other words, the public as a whole does not put great credence in his promise not to join a government that is not a unity government. However, among those who voted for Yisrael Beiteinu in the April elections, about three-fourths do believe Lieberman’s assertions that he will join only a government of that kind. Among Likud voters less than a fourth believe these avowals of his, but among Blue and White voters a clear majority believes them (58%).

To Annex or Not?

In light of the rumors that President Donald Trump will give Prime Minister Netanyahu a “present” toward the elections in the form of some sort of green light for the annexation of Area C, we asked: “If the Trump administration announces support for Netanyahu’s declarations about annexing Area C, will you support or oppose such an annexation?” Forty-eight percent of the Jewish sample answered that they would support the annexation in such a situation compared to 28% who said they would oppose it. An especially high rate – about one-fourth – said they did not know what their position would be in that situation. In the Arab sample the rate of “Don’t knows” was even higher – about a third. Only 11% of the Arab respondents said they would support the annexation in this situation.

Figure 7: If the Trump administration announces support for Netanyahu’s declarations about annexing Area C, will you support or oppose such an annexation? (%, Jews and Arabs)

We went on to ask: “According to estimates, there are now about 200,000 Palestinians living in Area C. If Israel indeed annexes this land, what, in your opinion, should be done regarding these Palestinians?” Again especially high rates of Jews and Arabs chose the “Don’t know” option. Among the Jews, the highest rate (36%) favors transferring the Palestinians from Area C to territories under the Palestinian Authority’s control (on the right this rate comes to 46%). Among the Arabs, the preference is to grant full citizenship rights to those Palestinians who would want to remain in the land to be annexed (46%).

Figure 8: If Israel indeed annexes Area C, what should be done with the Palestinians who live there? (%, Jews and Arabs)

Having found a high rate among Jews who favor the annexation of Area C as well as considerable support for transferring the Palestinians from there to territories under PA control, we asked: “If Israel annexes Area C, will you support or oppose establishing a Palestinian state in the rest of the West Bank/Judea and Samaria?” It turns out that the Jewish public is divided on this question: 37% say they would support it while 40.5% say they would oppose establishing a Palestinian state in the territories not to be annexed. As expected, on the left we found a majority for those who support setting up a Palestinian state; in the center, slightly less than half supporting it and about a fourth opposing it; while on the right, slightly more than half oppose it. It should be noted that on the right and in the center, the rate of “Don’t knows” is considerably higher than on the left.

Figure 9: If Israel annexes Area C, will you support or oppose establishing a Palestinian state in the rest of the West Bank/Judea and Samaria? By political camp (%, Jews)

Indeed, the event has already transpired, but it still is not known what impact it will have and whether it will not recur in the future. Hence we asked: “Some claim that Israel’s decision to bar the entry of the two American congresswomen from the Democratic Party was unwise because it will seriously damage Israel’s relations with that party, for which most American Jews vote. Others claim that barring their entry was the right decision because these congresswomen have antisemitic views and support a boycott of Israel, so that their visit would have caused Israel great harm. With which claim do you agree more?” Among the Jewish interviewees there was greater agreement with the second claim, namely, that the visit would have caused more damage (47%). A minority (25%) backed the first claim – that it was preventing the visit that caused greater damage. In the Arab sample the distribution of responses was the opposite: most thought that the damage caused by barring their entry was higher than the damage that the visit could have caused (41% vs. 12%). The rate of “Don’t knows” was high, especially among the Arab interviewees (Jews – 28%, Arabs – 47%).

A segmentation of the Jewish sample by political camp shows that on the left, the majority (63%) supports more the claim that the decision was unwise and that preventing the visit would cause greater damage to Israel’s relations with the Democratic Party. However, in the center and on the right, those who consider that preventing the visit was justified because the visit itself would have caused greater damage are in the lead, though in the center the gap between the rates of those holding the two opinions was much smaller than on the right (center –40% vs. 33%; right – 58% vs. 15%).

The Israeli Voice Index is a project of the Guttman Center for Public Opinion and Policy Research of the Israel Democracy Institute. In the survey, which was conducted on the internet and by telephone (supplements of groups that are not sufficiently represented on the network) from August 25 to August 29, 608 men and women were interviewed in Hebrew and 161 in Arabic, constituting a representative national sample of the entire adult population of Israel aged 18 and older. The maximum sampling error for the entire sample was 3.7%± at a confidence level of 95%. The fieldwork was done by the Rafi Smith Institute under the direction of Rafi Smith. For the full data file see: https://dataisrael.idi.org.il