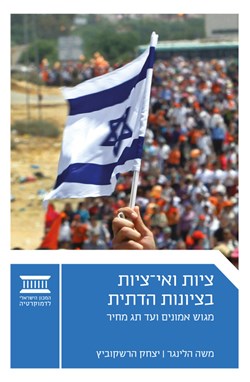 From Gush Emunim to the Price Tag Attacks

This volume offers a panoramic portrait of the tension between the Religious Zionist commitment to the settlement enterprise and its loyalty to the institutions of the state and compliance with its laws.

On the other hand, throughout the years—and despite all the challenges that have faced Religious Zionism regarding the settlement of the Land of Israel—time and again, in most cases, these warnings have proven false; the overwhelming majority of Religious Zionists are loyal to the State of Israel and its institutions, obey its laws, and live as normative citizens.

How is it, then, that are two such different views of this group?

This volume addresses the roots of this phenomenon. It offers a panoramic portrait of the tension between the Religious Zionist commitment to the settlement enterprise, on the one hand, and its loyalty to the institutions of the state and compliance with its laws, on the other. The core of the volume is the ambivalence of broad circles in the Religious Zionist camp toward the campaign to settle parts of Greater Israel. The book reveals that even though there have been clashes with the rule of law, even in the most highly charged cases, the Religious Zionist ideology has curbed the dangerous trends to illegal action. Nevertheless, the book also indicates that the internal dynamics within Religious Zionism are liable to lead, for the first time, to a true breakdown of the rule of law and even widespread insubordination in the military.

In light of the central role of the Religious Zionist community in Israel today, this is an issue of prime importance.

Dr. Moshe Hellinger is a Senior Lecturer and Deputy Head of the Department of Political Science at Bar-Ilan University and a former Research Fellow at the Israel Democracy Institute. He studied at the Rabbi Amiel Yeshiva (Hayishuv), the Hebron Yeshiva, and the Mir Kollel, and served as head of the Schwarcz Institute for Judaism, Ethics, and State at Beit Morasha of Jerusalem.

Dr. Isaac Hershkowitz is a Lecturer in the Department of Jewish Philosophy at Bar-Ilan University and a Researcher at the Israel Democracy Institute. An alumnus of the Ma’aleh Adumim hesder yeshiva, he has taught at the hesder yeshiva in Petah Tikva and serves as the rabbi of the Netzah Shlomo congregation in that city.