Professor Yedidia Stern argues that the question of how we should relate to the Temple Mount is more complex than any other issue on the public agenda in Israel. This question must be discussed in three parallel dimensions—religious, national, and liberal. This poses a serious challenge, which must be approached with the utmost sensitivity. 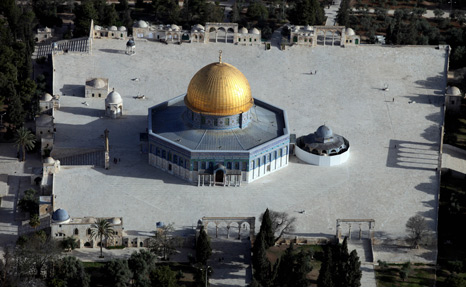 What could be more natural and appropriate than full and complete realization of Jewish sovereignty over the Temple Mount—the tiny strip of land, just a few hundred square meters large, which has been at the center of the collective Jewish consciousness for generations? How can we, the fortunate generation that redeemed the Land of Israel and gathered in the exiles, fail to work actively to fulfill Isaiah’s vision that “the Mount of the Lord’s House shall stand firm above the mountains and tower above the hills”? When we sing “If I forget thee, O Jerusalem, let my right hand wither,” is it just lip service?

It is tempting to be seduced by such rhetoric. It has fanned the flames of the intensive attempts to strengthen Jewish presence and renew Jewish prayer on the Temple Mount in recent years, and has swept up some 40% of Jews in Israel, who believe that the status quo on the Temple Mount should be changed. (This figure includes a third of all secular Jews, but only 17% of the ultra-Orthodox.) But we must not let this rhetoric, and the fantasies that it inspires, cloud our perception of reality. The activism of the national-religious community, which is positive in and of itself, must be deeply rooted in knowledge of the facts and careful consideration of their ramifications. A romantic attempt to base our actions on pure faith and the desire of our hearts is liable to lead to a national and religious calamity. The tragedy that ensued when Rabbi Akiva believed that Bar Kokhba was the Messiah and could defeat Rome proves my point.

The question of how we should relate to the Temple Mount is more complex than any other issue on the public agenda in Israel, as befits the centrality of this holy site in our consciousness. This question must be discussed in three parallel dimensions—religious, national, and liberal. Each of these areas is quite thorny in and of itself; the combination of all three poses a serious challenge, which must be approached with the utmost sensitivity.

On the religious front, a controversy is raging among central halakhic authorities. A growing group of rabbis permits Jews to go up to the Temple Mount, and even encourages them to do so. Messianists (e.g., Rabbi Yitzchak Ginsburgh) have joined forces with moderate rabbis (e.g., Rabbi Yaakov Medan) and even liberal rabbis (e.g., Rabbi Shlomo Riskin) in a fascinating and compelling ad-hoc coalition. Opposing them are the rabbis who prohibit going up on the Temple Mount, among them the great Chief Rabbis of yesteryear (Rabbis Abraham Isaac Kook, Ovadia Yosef, Mordechai Eliyahu and Avraham Shapira), leading rabbis of the ultra-Orthodox sector (Rabbis Yosef Shalom Elyashiv and Aharon Leib Steinman), contemporary chief rabbis of Jerusalem (Rabbis Shlomo Amar, Aryeh Stern, and Avigdor Nebenzhal), rabbis of the "Hardal" (Zionist ultra-Orthodox) community (Rabbis Zvi Tau and Shlomo Aviner), and many others. There is no doubt that those who forbid going up to the Temple Mount have greater halakhic and public stature than those who permit it.

In the national arena, considerable weight must be given to the argument that we must never surrender to violence, and certainly not on the most symbolic issue of all—control of the Temple Mount. At the same time, however, we cannot ignore the realistic approach that considers the limitations of national power and seeks to exercise that power responsibly. Make no mistake: If we do not think carefully and act wisely with regard to the Temple Mount, 1.6 billion Muslims, fueled by religious fervor, are liable to mobilize and become active participants in the Israeli-Palestinian conflict. Arguments based on principle, as important as they may be, must be weighed against the likely outcome of their implementation. It is acceptable to take risks to promote national goals; that's what Ben-Gurion did in 1948. But the considerations that we take into account must be based on reality—we must analyze the costs and benefits in the here and now.

Lastly, the liberal analysis: The thundering silence of Israeli human rights advocates regarding the closure of the Temple Mount to Jewish worshippers is puzzling. Why do they not protest? This is an infringement of the religious freedom of many people and a violation of Israel's commitment to ensuring free access to the holy sites for members of all religions. Rabbi Yehuda Glick, in his campaign to allow Jews and Muslims to pray on the Temple Mount, is working as a human rights activist, which is worthy of praise. But as with everything else, in choosing our course of action, we must balance the exercise of the fundamental right to pray against the infringement of other rights that is likely to ensue. In this case, the right to life of countless future victims is liable to be infringed if Jewish prayer on the Temple Mount triggers a holy war, as it seems likely to do.

How, then, can we deal with these contradictory considerations, which are each pulling in a different direction? I am not proposing that we renounce the right of Jews to pray on the Temple Mount; on the other hand, however, I am not proposing that we exercise that right fully, in the here and now. There is another way, which takes a dialectical approach to the right to go up to the Temple Mount and seek God’s closeness precisely in that place. According to this approach, we must distinguish between the world of emotion and the world of action. It is possible to long for the Temple Mount with profound sincerity but at the same time to exercise restraint with regard to actually satisfying that desire.

Religious fervor is a powerful motivating force. For some people, it is what gives meaning to life. But as both human and Jewish history show, religious energy has the potential to be a source of blessing and great danger. This type of fervor needs checks and balances. We learned this lesson for the first time, sharply and painfully, on Mt. Sinai: it took just 40 days to descend the short and seductive path from the exhilaration of receiving the Torah on Mt. Sinai to the depravity of building the golden calf at the mountain's foot. The tension between the desire of our People “to break through to the Lord” when the Torah was given, and God’s restriction “beware of going up the mountain or touching its border,” is seared in our collective consciousness. The dialectical approach does not propose that we compromise on our right to the Temple Mount and our freedom to worship there. Rather, it proposes that we make a conscious choice, a calculated decision, to voluntarily impose a restriction that has deep religious and educational roots. This path has been carefully paved and delineated by religious guidelines and rabbinic commentaries throughout the generations.

Experience confirms the psychological insight that longing for something can often inspire and fill the soul just as powerfully as obtaining the desired object. Longing for a love object creates a constant yearning, which molds consciousness over time. It is not necessary to prostrate oneself on the ground of the Temple Mount in order to connect to it. We will continue to commune with our Creator in the same way as our ancestors did, throughout our history and in every corner of the Earth: We will turn our faces toward the Temple Mount and point our hearts in that direction.

This exercise of restraint is not an expression of religious timidity or national weakness. Rather, it is a bold and courageous suppression of desire and an expression of the pragmatic wisdom of a nation that loves life.

Yedidia Z. Stern is Vice President of the Israel Democracy Institute and a Professor of Law at Bar-Ilan University.

This article was originally published in the Jerusalem Post on August 8, 2015.