* In the September survey we found a significant increase in the rate of Israelis who are optimistic about the future of democratic rule and about the future of Israel’s security. The increase is evident particularly on the left and in the center and does not exist in the right-wing camp (Jewish Israelis) where there was a decline in optimism.

* After months of decline, this month saw a clear increase in the rate of respondents who trust the propriety of the elections, meaning that the results that were announced accord with the actual voting.

* After the elections there was a rise in the rate of opposition, among the Jewish public, to the inclusion of Arab parties in the government and to the appointment of Arab ministers.

* A majority of the entire public does not believe Liberman’s declarations that Yisrael Beiteinu will join only a unity government. Among voters for the party itself, a large majority does believe him.

* A small majority of the entire public is against the state offering Netanyahu a plea bargain whereby he would admit to the charges against him and permanently retire from public life in return for not having to stand trial. The majority also does not believe he would agree to sign such an arrangement.

* The public is divided over whether the year that passed was good or bad. The rate who think it was good among Jewish Israelis clearly exceeds the rate among Arab Israelis. On the right the majority thinks it was good, while in the center and on the left only a minority believes so.

* As for the coming year, the general mood is quite optimistic: the highest rate (about a third) think it will be better than the previous year, twice the rate who think it will be worse than it. On the left the optimism is much higher than in the center and on the right. 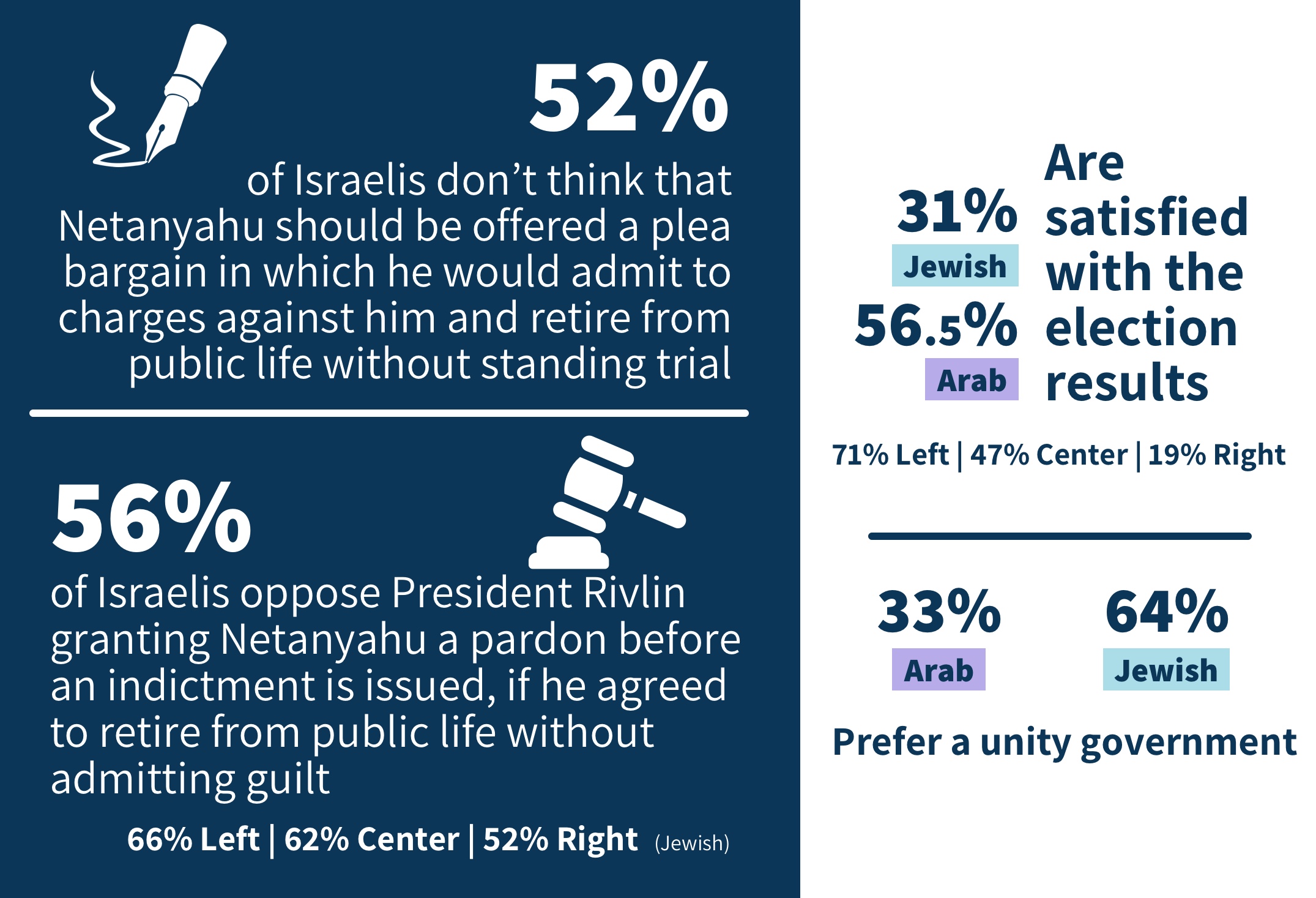 A segmentation of the Jewish sample by political camps reveals the source of this increase: whereas in August only a minority on the left showed optimism about the future of Israeli democracy, in September half of them said they were optimistic about it. On the center, too, a certain increase in optimism is evident here. However, on the right slight decline emerges in optimism about the future of democracy.

When it comes to the future of the security situation, too, the left and the center are more optimistic in September than they were in August. On the right there was no significant change in the degree of optimism here.

The rise in optimism on the left and in the center, as well as the decline on the right, are apparently related to the political camps’ different degrees of satisfaction with the results of the elections that were held in the middle of the month.

Satisfaction with the election results - The rate of Arab Israelis who are satisfied with the results is higher than the rate of Jewish Israelis who are pleased with them (56.5% vs. 31%). Among Jewish Israelis the gaps between the different political camps are very large: as the next diagram shows, the voters for the parties of the center and the left are much more satisfied with the election results than the voters for the right-wing parties.

Satisfaction with the election results by Knesset voting in the September 2019 elections (%, entire public)

Regarding optimism about the future of national security, the effect of satisfaction with the election results is less evident.

Propriety of the elections – Apparently in light of the great efforts that were made by the Central Elections Committee to prevent hitches in the recent elections, alongside the fact that there were no disturbances of any significant magnitude in the nationwide voting, this month saw a considerable increase in the rate of those who trust the propriety of the elections, meaning that the results that were announced accord with the actual voting – and this after an ongoing decline in the public’s trust.

Do you or do you not trust the propriety of the Knesset elections, meaning that the results that were announced accurately reflect the public’s voting? (%, entire public)

Indeed, in all the political camps (Jewish Israelis) we found a majority who believe in the propriety of the elections. However, the gaps in the size of this majority are huge: left – 91% (in August 49%), center – 73% (in August 50%), right – 54% (in August 55%). In other words, whereas almost all those who located themselves on the left believe that the recently announced results are the real ones, only a bit more than half of those locating themselves on the right think so.

A segmentation by voting shows that the strongest support for a unity government was recorded among Blue and White and Yisrael Beiteinu voters, and the weakest among voters for the ultra-Orthodox parties.

Preference for a unity government by voting in the September 2019 elections (%, entire public)

Including Arab parties in the government – Perhaps because, in light of the latest election results, the issue has become real and not theoretical, we found a significant decrease in the Jewish public’s willingness to include Arab parties in the government and to have Arab ministers appointed, and an increase in opposition to such a development. Whereas, at the beginning of 2019, we found only 49% of the Jewish public opposing it, this time about three-fourths (74%) took that stance, almost the highest rate of opposition since we began to look into this question!

Among Arab Israelis the position is the opposite of that among Jewish Israelis, with two-thirds (66%) currently supporting inclusion in the government. Here too, though, a change for the worse occurred: this is a decrease compared to the past (81% supported inclusion in 2017 and 76% at the beginning of 2019).

Oppose the inclusion of Arab parties in the government, with the appointment of Arab ministers? (%, Jewish Israelis)

The gaps between the different political camps (Jewish Israelis) on this matter are very large: whereas among those defining themselves as left-wing only 26% oppose including Arab parties in the government and appointing Arab ministers, among those locating themselves in the center a majority opposes it (56%), and among right-wingers an even larger majority does not want to see Arab parties in the government (89%).

Will Yisrael Beiteinu join a unity government only? The majority (55.5%) of the public does not believe Avigdor Liberman’s declarations that his party will join only a national unity government. Among Jewish Israelis only 35% believe him and among Arab Israelis, 27%. At the same time, among the voters for his own party, Yisrael Beiteinu, a large majority believes Liberman (81.5%). The lowest rates of believers in the firmness of his position were recorded among voters for Shas (5%) and Torah Judaism (0%).

Believe that Liberman will not join a government that is not a national unity government, by Knesset voting in the September 2019 elections (%, entire public)

Plea bargain – Fifty-two percent of the entire public (with similar rates among Jewish and Arab Israelis) do not agree that the state should offer Netanyahu a plea bargain in which he would admit to the charges against him and retire from public life permanently while not having to stand trial. What is interesting is that a majority opposes this among both right- and left-wing parties, but apparently for opposite reasons: whereas, on the right, it is believed that he is innocent and hence a plea bargain that includes an admission of guilt and a departure from public life is a perversion of justice, on the left the opposition stems from a desire to see Netanyahu stand trial and be punished for his acts if found guilty.

A larger majority (58%) does not believe that he would agree to sign such an arrangement if the state were to offer it to him.

Against the state offering Netanyahu to sign a plea bargain/pardon, by voting in the September 2019 elections (%, entire public)

The year that has passed – The public is divided in assessing the year that has passed from Israel’s standpoint. Forty-six percent think it was moderately good or very good while a similar rate (44%) consider that it was moderately bad or very bad. The rate of Jewish Israelis who feel that the year now ending was good is higher than the rate who think so among Arab Israelis: 48% compared to 36%. Among Jewish Israelis, a majority of those who defined themselves as right-wing think the year that is ending was moderately good or very good (59%), compared to only a minority in the center and on the left (34%, 16%). A segmentation by religiosity (Jewish Israelis) shows that the group that looks backward with the greatest satisfaction are the religious (68%), and after them the ultra-Orthodox and the religious traditional (59%). Among the nonreligious traditional and the secular, only a minority looks with a good feeling upon the year that is passing (45%, 40%).

In general from Israel’s standpoint, how, in your view, was the year that is now ending? (%, Jewish and Arab Israelis)

The New Year – As for the New Year that is now beginning, the attitude is quite optimistic: the highest rate, about a third (35%), hope that it will be better and only a minority (17%) fear that it will be worse than the previous year. Twenty-nine percent think it will be similar to the year now ending while a high rate (19%) do not know – a rate that is not surprising in light of the speculative nature of the question alongside the fact that it still is not known what government will emerge.

The Israeli Voice Index is a project of the Guttman Center for Public Opinion and Policy Research of the Israel Democracy Institute. In the survey, which was conducted on the internet and by telephone (supplements of groups that are not sufficiently represented on the network) from September 22 to September 24, 606 men and women were interviewed in Hebrew and 151 in Arabic, constituting a representative national sample of the entire adult population of Israel aged 18 and older. The maximum sampling error for the entire sample was 3.7%± at a confidence level of 95%. The fieldwork was done by the Rafi Smith Institute under the direction of Rafi Smith. For the full data file see: https://dataisrael.idi.org.il