Public Security Minister Omer Bar-Lev decided to form a state commission of inquiry to investigate the police’s reported use of NSO spyware to hack the phones of decision makers, public figures and journalists. Dr. Dana Blander, a research fellow at the Israel Democracy Institute, explains the differences between Israel's various types of commissions of inquiry. 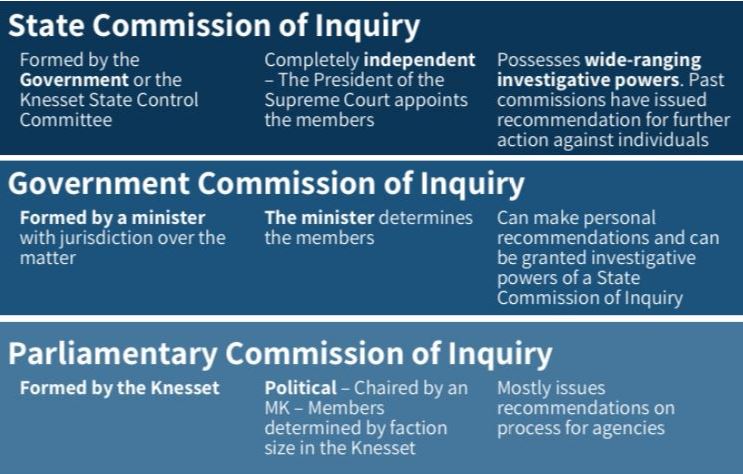 A Government Commission of Inquiry is established by virtue of section 8A of the Government Law, 5761 2001, which states that a minister may appoint a committee to examine a particular issue or event that is within his area of responsibility, and determine that such a committee will be headed by a retired judge. Since the Minister who established the committee is the Minister of Defense, the committee will submit the report to him.

The most serious type of commission is a State Commission of Inquiry, which is an independent committee that is charged with conducting a quasi-judicial procedure. It is set up either by a government decision, or by the Knesset State Control Committee following a report by issued by the State Comptroller. The President of the Supreme Court then appoints the members of the commission [by virtue of the Commission of Inquiry Law 5768-1968]. Such a commission has broad powers including the ability to call witnesses and to compel them to testify if they refuse. This commission's report, and the testimony provided during the inquiry, shall also not be used as evidence in legal proceedings.

The advantage of a State Commission of Inquiry is the breadth and depth of the inquiry it conducts, as well as the entrenched practice that the commission makes recommendations that can be both personal and systemic, and that governments not tend to ignore its recommendations, especially ones that are produced against individuals.

Governments do not tend to voluntarily set up state commissions of inquiry unless they see it as a means of calming public outrage during a crisis. Examples include the Sahmgar Commission that probed the evets leading up to the assassination of Prime Minister Yitzhak Rabin, the Agranat Commission after the Yom Kippur War; the Cohen Commission of the Sabra and Shatila massacre; and the Or Commission following the violent events of October 2000.