The 2021 Democracy Index reveals a complex picture regarding the level of public trust in key institutions and officials, 46% of respondents say that tensions between Jews and Arabs is the fiercest tension in Israeli society

(Jerusalem, January 6, 2022) Yohanan Plesner, President of the Israel Democracy Institute, and Prof. Tamar Hermann, Director of IDI's Viterbi Family Center for Public Opinion and Policy Research, presented President Isaac Herzog with the Israeli Democracy Index for 2021 today (Thursday). The Democracy Index, an annual publication for the past nineteen years, reveals a complex picture regarding the level of public trust in key institutions and officials, confidence in the country's civil service and the overall strength of Israeli democracy.

Isaac Herzog, President of the State of Israel: "The fall in Israeli citizens' confidence in state institutions is deeply troubling. There is no substitute for Israel's democracy, and there is no substitute for its state institutions, and therefore the loss of confidence keeps me awake at night. No state can exist if its citizens do not have confidence in it and its institutions. Public confidence is the most important asset that any state system or institution has, and the prolonged decline in public confidence is a warning light for all of us. I believe that the growing tension and distrust between authorities–the executive, the legislature, and the judiciary–have brought about a decline in the public's confidence, seeing and hearing all these brawls and words of criticism–some to-the-point, some less so. And when confrontationalism replaces partnership and collaboration–the results are clear. But it bears clarifying that this is not a decree of fate. We can and must act otherwise."

Yohanan Plesner, President of the Israel Democracy Institute: "IDI's 2021 Democracy Index makes clear that despite the many challenges we face as a country, it is inspiring to see that a vast majority of Israelis believe that their country is a good place to live. At the same time, the fact that we are seeing a decline in trust in the institutions of Israeli democracy is worrying. It would be wise of our leadership to take note of this reality and make good use of the data provided in the data in the Democracy Index when planning public policy."

Prof. Tamar Herman, Director of IDI's Viterbi Family Center for Public Opinion and Policy Research: "The 2021 Democracy Index support our previous findings that Israelis see the world through political glasses. We once again see how opinions on a wide range of issues which are not necessarily political, are closely aligned with where Israelis place themselves along the political divide, which in its turn strongly correlates with their national identity (Jewish/Arab), and where they self-identify along the religious-secular spectrum.

As power has shifted over the past year between parties who formerly sat in the opposition and now form the government, and those who were in power for the past twenty years (the Likud and ultraorthodox and radical right parties) are now in the opposition, opinions have realigned accordingly. Those who voted for the present coalition parties and who had in the past voiced deep concern about the state of Israeli democracy are significantly now optimistic about the future. While those who voted for parties who are now in the opposition and used to be quite optimistic are now more critical about the state of governance in Israel."

76% of Jews and 66% of Arabs think that Israel is a good place to live – and most Israelis (70% Jews, 81% Arabs) would prefer to stay and live in Israel even if they were promised citizenship in another Western country.

Social Tensions – Tensions between Jews and Arabs (46%) are rated the most severe among different groups in Israeli society this past year – a sharp increase compared to last year (28%). More Arab Israelis, then Jewish Israelis indicate this as the main tension in Israeli society (64% and 42.5% respectively). It is followed by the tension between right and left (32%), which in recent years has been in first place.

Differing sense of security - Most Jewish Israelis agree that Israel succeeds in ensuring the security of its citizens (61%) compared to only a minority of Arab Israelis who feel this way (33%). When only about a third of the public believes that Israel manages to take care of the well-being of its citizens, without significant changes between Jews and Arabs.

Four Principles of Democratic Governance – a high rate think that the four guiding principles are not safeguarded enough – the right to a dignified existence (54%); protection of minority rights (43%) the principle of separation of powers (42%), and freedom of expression (32%).

Privileges – 42% of Jews believe that they should have more rights than non-Jewish citizens, a sharp increase from recent years (27% in 2018). Among those who self-identify as rightwing a majority agree with this (57%), compared to about a quarter in the center (28.5%) and a negligible minority on the left (5%).

Strong Leader – 55% of Jewish Israelis and 61% of Arab Israelis think that Israel needs a strong leader who is not swayed by the Knesset, the media or public opinion. Moreover, in recent years one can see a steady increase in the proportion of those who agree with this claim, after a number of years in which support for such a system of government was lower.

Israel's International Ranking – Israel's ranking in most international indicators has gone down. For example, political rights, civil liberties and freedom of the press have all gone down when compared to the average grade between 2010-2019. Only political participation and functioning of the government have both improved and democratic political culture didn’t change. 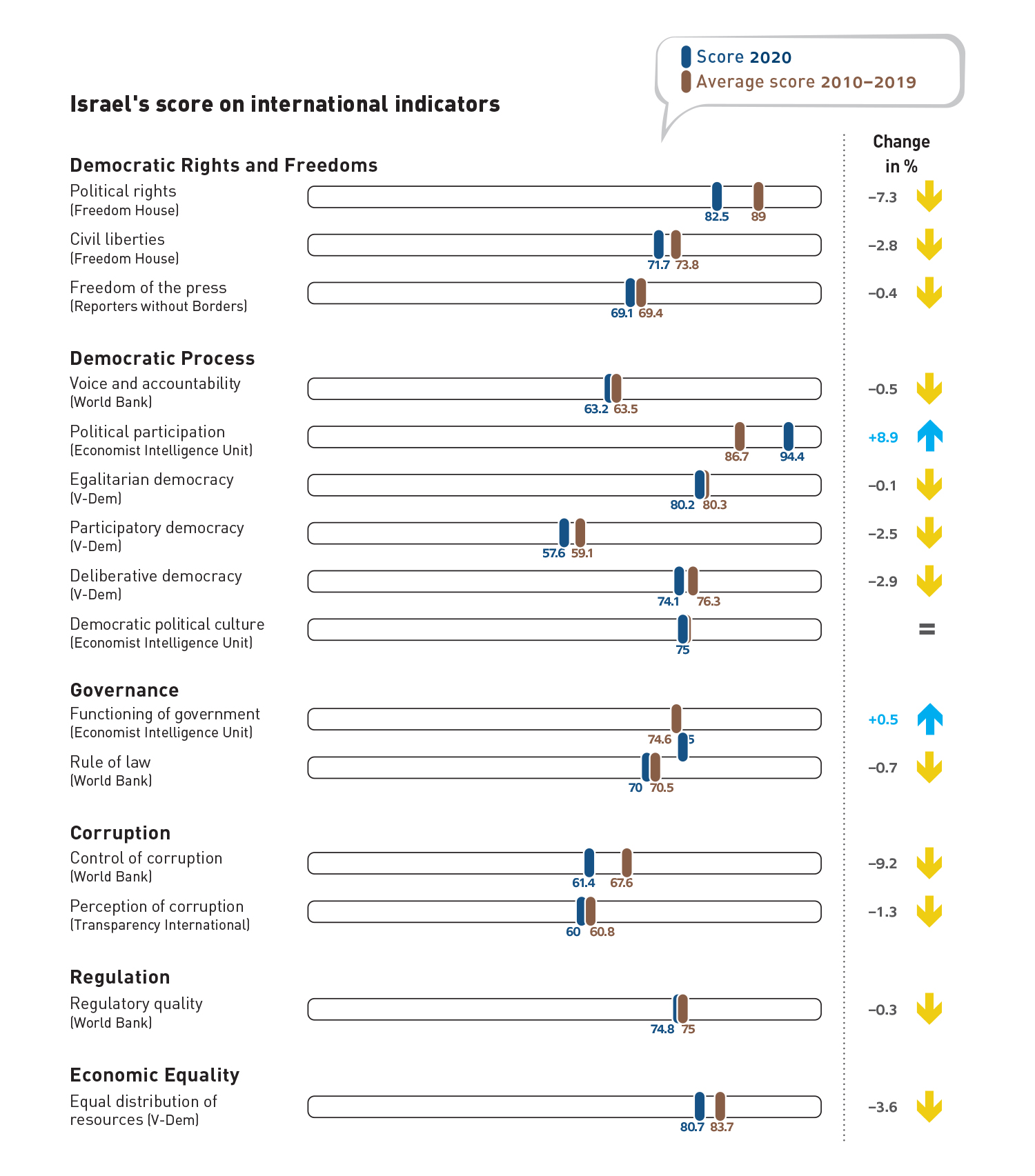 The 2021 Democracy Index was prepared by the Viterbi Family Center for Public Opinion and Policy Research of the Israel Democracy Institute. In the survey, which was conducted on the internet and by telephone (supplements of groups that are not sufficiently represented on the network) from June 15-24 2021 & October 24-27, 2021. In October1004 men and women were interviewed in Hebrew and 184 in Arabic, constituting a representative national sample of the entire adult population of Israel aged 18 and older. The maximum sampling error for the entire sample was 2.9%± at a confidence level of 95%. The fieldwork was done for the June survey by the Dialogue Institute (Jews) and the Afkar Institute (Arabs) and for the October survey by the Midgam Institute. For the full data file see: Data Israel.