As we mark International Women’s Day, there are a record number of women are in the Knesset (35) and in the government (9) but most senior government positions are still held by men.

The issue of women’s representation in politics has been a major topic of public debate in many countries around the world over the last two decades. This debate is based on the assumption that significant representation of women in political roles is of great importance. The presence of women in the public arena is viewed in a positive light, rooted in democratic values such as equality and pluralism, fortifying women’s status in society and advancing the perception of women as citizens of equal value as men. The backdrop to the public debate on this issue is the fact that in many countries, women still make up only a small percentage of elected officials. This gap has led various states and political parties to take steps aimed at improving women’s representation in politics. For example, several countries have introduced representation quotas, which have led to a consistent and significant increase in women’s representation in elected assemblies. Recently, we are seeing more cases of governments with gender parity—that is, an equal number of men and women holding ministerial posts.

Women "at the Top"

The number of women who have reached the highest political office in their country (prime minister or president) has grown significantly over the last two decades. Now that Angela Merkel has stepped down as Chancellor of Germany, women currently serve as leaders of 7 out of the 38 OECD states. These include Jacinda Ardern (New Zealand), Mette Frederiksen (Denmark), and Magdalena Andersson (Sweden). As shown in Table 1, women have served as prime minister or president in more than half the OECD countries since 2012 (21 out of 38). This list includes countries in which the glass ceiling was shattered for the first time during this period (Germany, Belgium, Austria, and Sweden) as well as countries in which women had already held this role previously (United Kingdom, Canada, and New Zealand).

In 14 of the 38 OECD member states, women have never been appointed to the highest political position. The United States is one of these, though the current term of Kamala Harris as the country’s first woman Vice President is an important development.

Table 1. Most recent year in which a woman held the highest political office* in the 38 OECD member states

* Prime minister, or president in presidential democracies (ceremonial presidencies are not included in this list)

Israel was one of the first countries to be led by a woman, when Golda Meir became Prime Minister in 1969. At the time, Meir was only the third woman in the world to reach such a position. However, since she left the post in 1974, Israel has had nine men serve as prime minister and not a single woman.

Women in the Knesset

Currently (as of early March 2022), there are 35 women serving in the Knesset, representing around 29% of all Knesset members. The rise in the number of female members of Knesset is one of the standout political phenomena of the last three decades. In Israel’s first three parliamentary elections (1949–1955), women constituted around 10% of those elected to the Knesset (see Figure 1). Subsequently, over the four decades up to 1999, the number of female Knesset members dropped, and ranged between a low of seven (1988) and a high of 11 (1992). Between 1999 and 2015, there was a steep rise in the number of women Knesset members, but this number has steadied since the 2015 elections. In the last five elections, the number of women elected to the Knesset has ranged between 28 and 30. In the most recent elections, 30 women were elected, but the application of the “Norwegian Law,” enabling government ministers to resign from the Knesset and be replaced by another member of their party, resulted in six additional women entering parliament. (in February 2022 one of the six women had to resign from the Knesset) 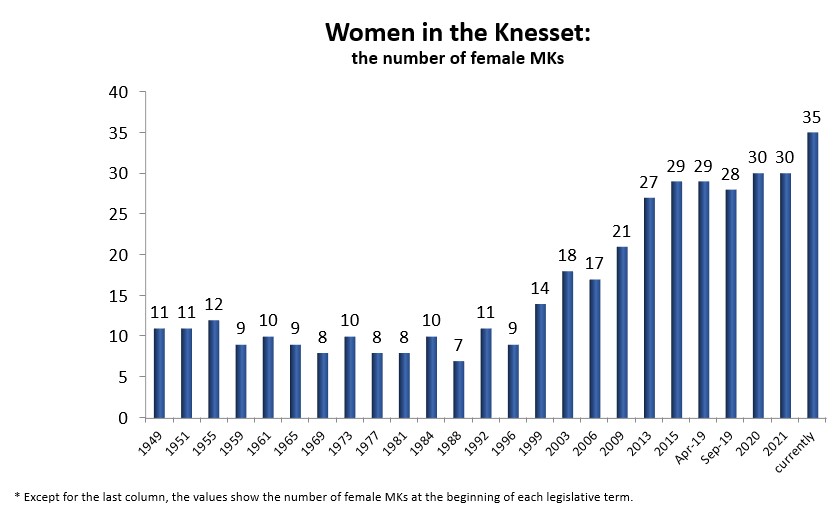 Note: With the exception of the last column, the data in the figure relate to the number of women in Knesset immediately following the elections

The rise in women's representation in the Knesset is far from being a unique phenomenon. In fact, the steep increase in the number of women elected to parliaments around the world has been one of the most noticeable political developments of the last two decades, and not just in democratic countries. By way of demonstration, until 2003 there was only one country in the world in which women constituted more than 40% of members of parliament. Since then, this figure has been surpassed in more and more parliaments around the world, and today- there are 32 such countries.

A comparison between women's representation in the Knesset and in equivalent representative bodies in other countries reveals that (as of the beginning of 2021) Israel is currently ranked 61st out of 192 countries. If we restrict the comparative sample to member states of the OECD, we find that Israel comes in 23rd out of 38 (see Table 2).

* Data relates to a single house of representatives or to lower house as of January 2022.

Until 1974, the only woman who had served as a minister in Israel’s government was Golda Meir. Otherwise, the government had always been entirely male. The next women ministers were Shulamit Aloni (1974), Sarah Doron (1983), Shoshana Arbeli-Almozlino (1986), and Ora Namir (1992). Thus, between Israel’s independence in 1948 and 1996, these were the only five women who served in government. In the ensuing decades, the situation has improved somewhat, and an additional 23 women have been appointed to ministerial positions.

Both of the most recent two governments set new records for women's representation in government. The 35th government—the bloated unity government created following the 2020 elections—included a record number of eight female ministers when it was formed, twice as many as the previous high. Previously, the largest number of women in the government at any one time was four. The current Bennett-Lapid government broke that record, and there are currently nine women out of a total of 27 government ministers (33%).

Though this is undoubtedly a positive development, there is no reason to become overly excited by this rise in the inclusion of women in Israel’s government. First, because this increase has not resulted in a women being head one of the more prestigious ministries. The last woman to serve as foreign minister was Tzipi Livni (2006–2009), while no woman has ever been put in charge of one of the other two most prestigious ministries—Defense and Finance. 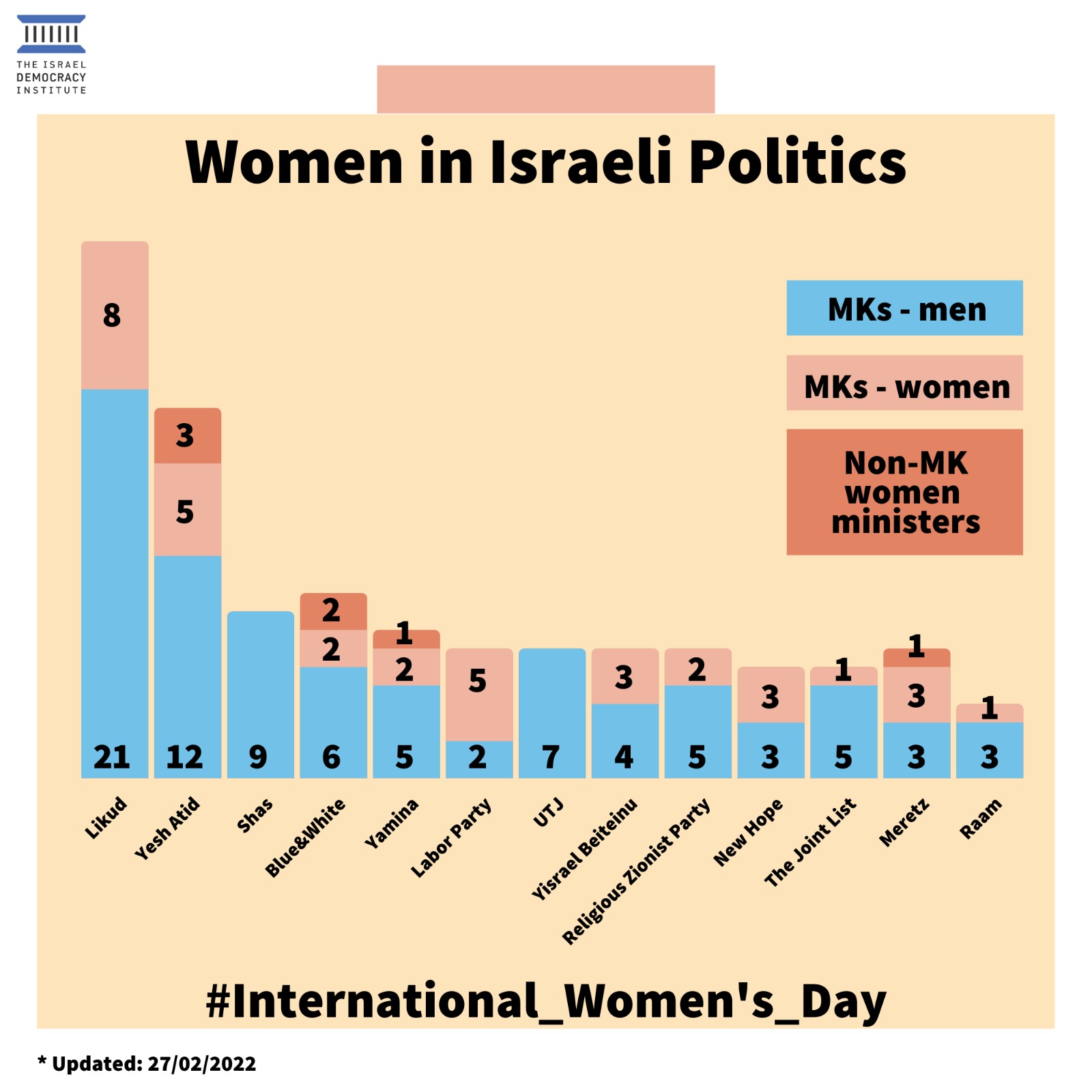 Second, the improvement in Israel has been slower than in many democracies, in which not only has women's representation in government risen, but there have also been more and more cases of governments with gender parity, or even with a female majority. As can be seen from Figure 2, Norway, Spain, Finland, and Sweden currently have governments in which women are the majority, while the governments of Canada and the Netherlands have an even or almost even number of male and female ministers. There has also been a significant improvement in this regard in the United States. Two years ago, women constituted just 13% of the members of Donald Trump’s cabinet. Today, this figure has risen sharply to 38% in Joe Biden’s cabinet, including the first woman Vice President and the first woman to serve as Secretary of the Treasury (Janet Yellen). 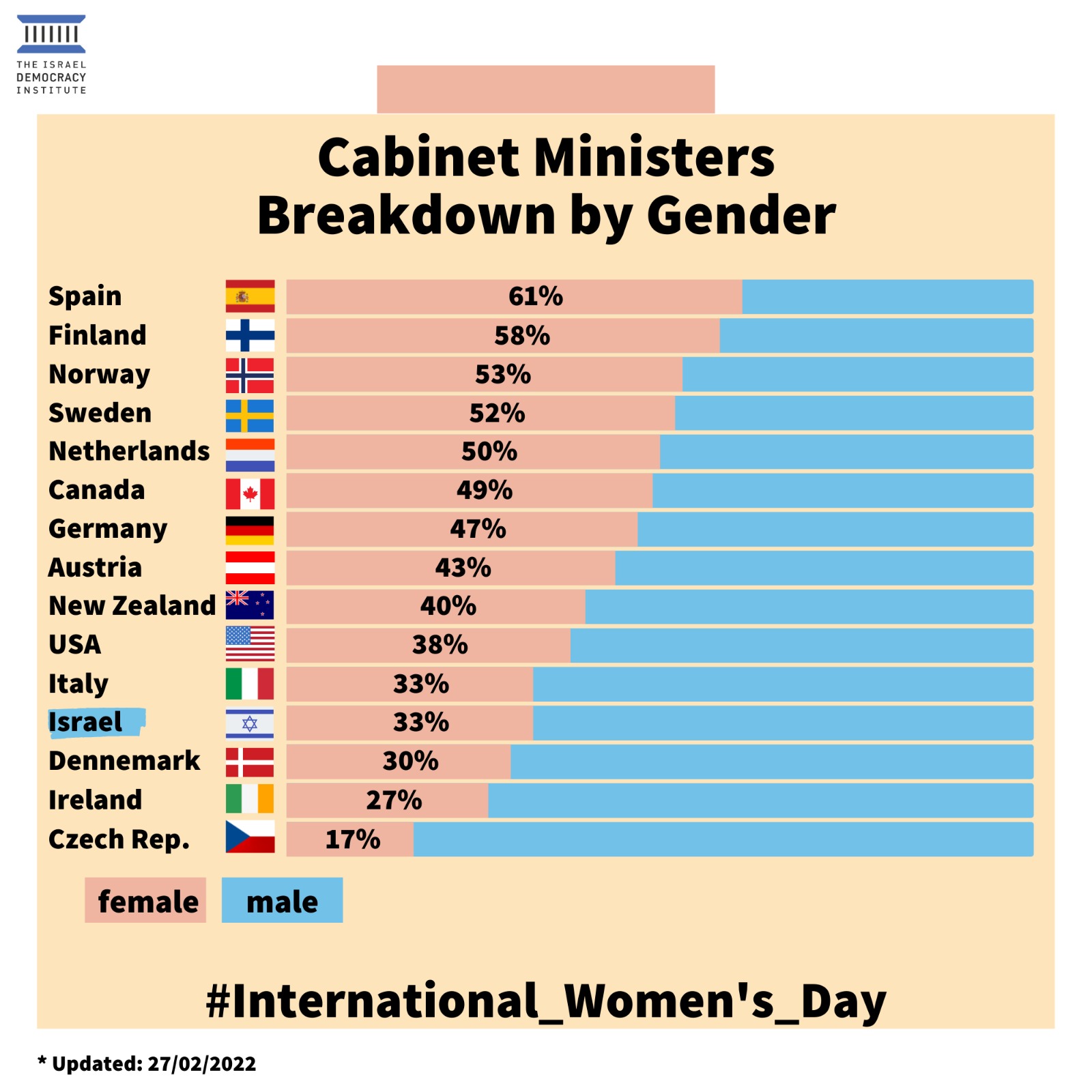 The data indicate that women’s representation in Israeli politics is now at an all-time high, both in the Knesset and in national and local government. Though not elected positions, it is also worth noting the appointment of Gali Baharav-Miara as Attorney General (the first woman to hold this office) and of Esther Hayut as President of the Supreme Court (the third woman president and the second consecutive president). In addition, mention should be made of the breakthrough in recent years in women’s representation in Arab parties (Ra’am, Balad, and Ta’al), which in the past had refrained from including women in their candidate lists. The change in this practice has led to women candidates from each of these parties being elected both to the current and the 23rd Knesse (2020–2021).

So, the current picture is positive, but there is also room for improvement in several aspects of political representation. For example, only one political party is currently headed by a woman—Merav Michaeli of the Labor Party. Nine years ago, there were three female party heads (Tzipi Livni of Hatnua, Zehava Gal-On of Meretz, and Shelly Yachimovich of the Labor party). In addition, as long as the ultra-Orthodox parties continue refusing to include women in their candidate lists, the chances of coming close to gender parity in Knesset representation will remain slim. In other words, there is still a long road ahead of us in order to achieve women’s representation in politics that will reflect their share of the overall population.

In closing, it should be remembered that political representation is only one aspect of women’s status in society. Another key issue that should be taken into account is that of women’s economic status in society. Here, the picture is less encouraging: Though the rates of women's participation in the labor market are high (Israel ranks 22nd in the world in this regard, according to the WEF’s Global Gender Gap Report 2021), Israeli women suffer from large wage gaps relative to men employed in similar jobs (105th in the world!) and from low representation in senior management positions (66th in the world).