Since its establishment in 1948, Israel's demographics have shifted greatly due to large immigrant waves (aliyot). This article, originally written in Hebrew for the Israel Democracy Institute's online journal Parliament, examines several models of cultural absorption, analyzes the success of Israeli absorption efforts in the past, and proposes possible improvements for the future.

Since the founding of the state, profound demographic changes have taken place in Israeli society as a result of successive waves of immigration (aliyot). Each immigrant group, with its own unique characteristics, has had to contend with the difficulties of integrating into an emerging society in a constant state of flux. Over the years, Israel's social-cultural-political discourse has changed: Gradually, the "melting pot" policy that sought to establish a uniform and unified Israeli collective faded, and a more pluralistic approach evolved, one that stresses individualization and particularism and accepts the existence of a multicultural identity. Consequently, each of the major aliyot was received in a different way, with the manner of its acceptance affecting its assimilation into Israeli society.

There are several models of cultural absorption, each yielding a different outcome:

In addition to these models, the unique characteristics of the particular migrant group and the economic, political, and cultural changes in the receiving society must be taken into account. These factors, taken in combination, have a decisive effect not only on the absorption process but on the society as a whole.

Following the mass immigrations of the late 1940s and early 1950s, Jews of Asian and North African origin (henceforth Mizrahim) made up 40% of Israel's Jewish population. But the demographic shift in Israeli society was not reflected in the balance of power, and the ruling elite remained largely Ashkenazi.

Since the aliyah of the 1950s, the Mizrahim had been discriminated against politically, as demonstrated by their lack of representation in the corridors of power. Likewise, they were ranked in the lower echelons in terms of income level, standard of living, and occupation. Their feelings of injustice and discrimination came to a head in the Wadi Salib riots of 1959, which began with a chance confrontation between the police and a resident of Haifa's Wadi Salib neighborhood and quickly escalated into a series of violent demonstrations throughout the city. While this was a one-time, localized event, it had ramifications for Israeli society as a whole: first, the riots led to a rise in electoral support for the Herut movement among Jewish immigrants from North Africa; and second, the conflagration marked the beginning of the emergence of class consciousness among Mizrahi Jews.

In the early 1970s, the confluence of ethnic and social-economic rifts found potent expression in the founding of the Israeli Black Panther movement, led by second-generation North African immigrants and residents of Jerusalem's Musrara neighborhood who were protesting what they saw as the Establishment's disregard of social problems. To achieve their central goal of narrowing the social-economic gap, the group used violent tactics, including furious demonstrations and confrontations with police. Not only did they object to the conditions granted them by the state compared with those of the Ashkenazi Jews who had arrived together with them in the early years of the state, but they sought the same treatment as the Russian immigrants of the early '70s; toward this end, they demanded government assistance to improve the living conditions of second-generation North African immigrants, who were still languishing in poverty. This situation led to bitter tensions between new immigrants (from the 1970s) and earlier arrivals (from the 1950s), as illustrated in figure 3 (below) from the 2007 Israel Democracy Index: In 1975, a record 69% of the population characterized relations between new and longstanding immigrant populations as "not good" or "not at all good."

While the Black Panthers did not achieve major successes on the political front, the '70s and early '80s were marked by fierce tensions between Ashkenazim and Mizrahim as a result of the publicity garnered by the movement and the social-cultural awareness that it generated. As shown in figure 1, in 1971 (one year after the movement's founding), one-half of the population (51%) characterized relations between Ashkenazim and Mizrahim as either "not good" or "not at all good." While this figure dropped somewhat by 1975 (to 45%), it was still high.

In 1977, the social protest of the Mizrahim spread to the political arena, sweeping the Likud party to power in the Ninth Knesset. First- and second-generation immigrants, believing that the Likud under Menachem Begin would faithfully represent their interests and reduce the social-economic gap, gave the party their vote. Perhaps it was their sense of victory that created an atmosphere of reconciliation: in 1978, one year after the so-called "political upheaval," only 38% of Israelis described relations between Ashkenazim and Mizrahim as "not good" or "not at all good."

Following this brief respite, however, the worsening economic crisis of the early 1980s saw a widening of the social-economic divide, adding to the friction between Ashkenazim and Mizrahim. In 1981, 44% of the public characterized relations between the two groups as "not good" or "not at all good."

During the 1980s and 1990s, a change took place in the social-political sphere with the founding of such religious- and ethnic-oriented parties as TAMI (Movement for Jewish Tradition) in 1981; and SHAS (World Union of Sephardi Torah Guardians) in 1984, dedicated to "restoring the crown [of Sephardi Torah observance and ethnic pride] to its former glory." With its stated goal of rectifying the economic and social discrimination inflicted, in its view, on generations of Mizrahim in Israel, Shas also drew a connection between Israel's ethnic and social-economic divides. The party's strength grew during the 1990s amid the worsening of tensions in these areas; in the elections to the 15th Knesset in 1999, Shas won 17 seats, a fact that amply demonstrated the centrality of ethnic friction in the social-political discourse. In fact, whereas in 1989 only 21% of Israeli respondents felt that relations between Ashkenazim and Mizrahim were "not good" or "not at all good" (with 28% responding similarly in 1993), by 2000 the situation had deteriorated to the point where 52% held that the ethnic divide was still present and that relations between the groups were not good.

Since 2000, public opinion concerning relations between Ashkenazim and Mizrahim has stabilized somewhat, although the figures themselves are not encouraging: 2003 saw a record 57% who characterized relations between the groups as "not good." While there was a slight decline in 2004 in the proportion of respondents selecting "not good" (47%), the percentage has been rising steadily since then (to 55% in 2007).

An analysis of relations between Ashkenazim and Mizrahim in 2007, broken down by country of origin of the respondents, paints a similar picture: As shown in figure 2, 59% of Israelis of Asian and North African origin describe relations between Ashkenazim and Mizrahim as "not good" or "not at all good," as opposed to 42% of respondents of European or American origin who hold this view—a gap of 17%. Interestingly enough, Israelis hailing from the CIS further underscore the problematic relationship between Ashkenazim and Mizrahim, with 63% labeling it "not good" (this may be due to the differential treatment given to immigrants from the CIS, causing them to stress the differences between the two groups; see below for further discussion of this disparity).

Relations between Ashkenazim and Mizrahim by Country of Origin "Not good" and "Not at all good" (Jewish sample only; percentages) 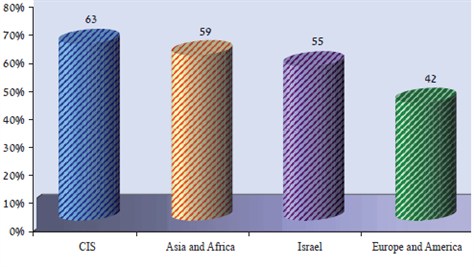 Thus, while the North African immigrants of the 1950s have integrated into Israeli society, the ethnic divide still plays a key role in the prevailing political discourse in Israel, and still affects—and is affected by—the country's social-economic situation.

Like the newcomers of the 1950s, Ethiopian immigrants also faced numerous problems since the community's social and economic characteristics hampered its integration:

The arrival of Ethiopian immigrants took place at a time when Israeli society was facing substantial social, economic, and political challenges: the wave of aliyah from the CIS, high unemployment levels, a widening social gap, and increased poverty. These trends affected the situation of the Ethiopian immigrants and the conditions confronting them in their absorption process.

Their sense of alienation and isolation, coupled with the geographic remoteness of their new communities from the center of the country, may have been responsible for the fact that their arrival did not lead to a worsening of relations between new immigrants and "old-timers." As shown in the Democracy Index, in 1994, 52% of respondents categorized the relationship as "not good," a relatively small percentage (see figure 3, below). But over time, feelings of discrimination began to intensify among Ethiopian immigrants, as reflected in the blood donation incident of early 1996 when it was revealed that virtually every unit of blood donated by Ethiopian immigrants was destroyed without their knowledge for fear that the donors carried infectious diseases. The affair triggered an unexpectedly stormy public protest, unexpected primarily because this community is generally known for its moderation. It is too early to determine what will become of this community and whether it will integrate successfully, for even today—twenty years after their aliyah—the bulk of Jews of Ethiopian origin have yet to find their place in Israeli society.

Between 1990 and 2005, 1,100,000 newcomers immigrated to Israel, 860,000 of them from the CIS, raising the country's population by 35%. In addition to its scope, this wave of immigration is distinguished by its social-cultural features:

The scope of the Soviet aliyah, the immigrants' ties to their homeland, and their concentration in specific residential areas, together with their sense of estrangement, led to a tendency toward social-cultural segregation. Some studies that examined the Israeli population's attitude toward new immigrants focused on such questions as: Do longtime residents feel that aliyah is vital to the state? Are they willing to make personal sacrifices for the sake of integrating new immigrants? Where do the new immigrants rank in the national set of priorities? According to research conducted by Elazar Leshem, in 1986 82% of the public held that aliyah is vital, while in 1992 only 71% felt this way.

Various groups within Israel's longstanding population have also developed differential attitudes toward the new immigrants. The sectors found to be most hostile toward immigrants from the CIS are people under the age of 30, native-born Israelis of Mizrahi origin, individuals who did not complete high school, and low-income earners. For example (as indicated in the Democracy Index), from the start of the wave of aliyah from the FSU, significant differences were found in the willingness of members of various ethnic groups to make personal sacrifices for the sake of aliyah: 47% of Jews of Asian or African origin were opposed to such concessions, compared with 29% of Jews of European or American origin. It is, therefore, not surprising that, with the widening of the social-economic divide in Israel, there was a worsening of relations between old-timers and new immigrants; in 2000, 65% of Israeli society categorized the relationship as "not good" or "not at all good."

Conclusion: Where to Next?

How well has Israeli society succeeded in absorbing the various waves of immigration? As stated, each of the aliyot experienced a different reception: The assimilation model was popular in the early years of the state, whereas the immigrants from the CIS aimed for integration into Israeli society combined with segregation, both by choice and by circumstance. It should be noted that, of all the models cited above, the most conspicuous is marginalization, which aptly describes the present status of Jews of Ethiopian origin.

The immigration difficulties encountered by newcomers still exist, and leave their mark on Israeli society every day, at a variety of levels. Even now, the public takes a dim view of relations between new immigrants and old-timers—still a major divisive factor in Israeli society. In 2007, over one-half of respondents (62%) characterized the relationship between the two groups as "not good."

There is no question that Israeli society is facing a significant challenge whose ramifications are enormous. Only time will tell if it is able to meet that challenge, to mend the rifts within, explore the social tensions, learn to know and accept "the other," and bolster the country's fragile social fabric.