On April 1, 2014, Israel's High Court for Justice will review a petition against the constitutionality of Amendment No. 4 of the Prevention of Infiltration Act. IDI researcher Dr. Reuven (Ruvi) Ziegler explains why he believes the Supreme Court should overturn this amendment just as it invalidated its predecessor. 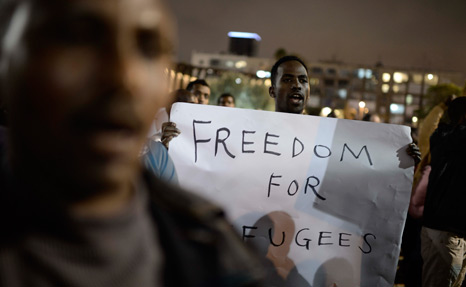 On September 16, 2013, in the High Court of Justice Decision 7146/12 Adam v. The Knesset, et al,See http://www.acri.org.il/he/2496 [Hebrew] an expanded panel of nine justices of Israel's Supreme Court unanimously ruled that Amendment No. 3See http://www.acri.org.il/he/13458 [Hebrew] of the Prevention of Infiltration Act of January 2012, which mandated detention of asylum seekers  for three years, was unconstitutional and quashed it.

On April 1, the same panel of nine justices of the High Court for Justice will review the petition against the constitutionality of the two components of this law (HCJ 8425/13 Anonymous v. The Knesset , et al)See http://www.acri.org.il/he/wp-content/uploads/2013/12/hit8425.pdf [Hebrew]. The petition was filed, inter alia, on behalf of two Eritrean asylum seekers who were held at the Sahronim detention facility under the previous law and were recently transferred to the neighboring Holot facility when Amendment No. 4 came into force.

In my article, "The Prevention of Infiltration Act (Amendment No. 4): A Malevolent Response to the Israeli Supreme Court Judgment," I argued that Amendment No. 4 is even more draconian than its predecessor, which was deemed unconstitutional, in part because of these following four reasons:

A petition that I co-authored, which was signed by 400 academics and intellectuals and sent to the Minister of the Interior and the Attorney General in January 2014,See the petition's Facebook page: Academics4freedom4refugees [Hebrew] stated that according to the Ministry of the Interior's data,See http://www.piba.gov.il/PublicationAndTender/ForeignWorkersStat/Documents/oct2013.pdf [Hebrew] there are currently nearly 54,000 asylum seekers residing in Israel, the vast majority of whom (49,000) fled from Eritrea and Sudan.The Population, Immigration and Border Authority, Policy Planning Division, "Foreign Worker Statistics," 5/2013 Edition, October 2013. [Hebrew] The petition also argued that Israel is obligated to examine the requests of asylum seekers for refugee status in good faith and through a fair procedure, according to the standards accepted in democratic countries; it should determine whether asylum seekers qualify for refugee status or at least if their lives or freedom would be at risk were they to be returned to their  states of origin. It is indeed possible that after a fair procedure, some of these asylum seekers would not meet the criteria of "refugee" as defined in the Refugee Convention. However, the wording of Amendment No. 4 stipulates that it will apply to situations in which the "border control officer found that there is a difficulty in carrying out the expulsion of the infiltrator." In other words, in situations in which the principle of non-refoulement does not allow Israel to forcibly expel "infiltrators" to their states of origin, the solution—as admitted by the legislator—is to hold them in Holot indefinitely or until they leave "voluntarily." This arrangement is in marked contrast to the "EU Qualification Directive" in EU countries, which provides socio-economic rights and other benefits to people who do not meet the refugee convention criteria but cannot be removed under non-refoulement ("subsidiary protection").Council Directive 2004/83/EC, of April 29, 2004.

In a previous article, I pointed out that the entire population of asylum seekers in Israel hold a class 2(a)(5) "residence permit" that does not entitle them to health care, except in case of emergency, or to National Insurance benefits. In addition, the employment of visas asylum seekers is pursuant to the State's pronouncement that was included in the "HCJ 6312/70 Kav LaOved" case, (namely, that the State does not presently enforce the prohibition on work that is stipulated in these permits).Reuven (Ruvi) Ziegler, "A Matter of Definition: On ‘Infiltrators’ and ‘Asylum Seekers’ in Israel," The Israel Democracy Institute, January 26, 2011. A new report published by the hotline for refugees and immigrants, indicates that the resident permit renewal process has recently become particularly difficult and burdensome,Sigal Rozen,“Streamlining the Process”: On the Mistreatment of Asylum Seekers by the Immigration Authority When They Renew Their Restricted Release Permits, The Hotline for Refugees and Migrants, March 20, 2014. to the point at which a week ago, the Ministry of the Interior was forced to announce that due to its heavy workload, it will not take legal action against asylum-seekers who did not manage to renew their visas.Ilan Lior, "Due to Workload: No Action will be Taken Against Asylum Seekers Who Did Not Manage to Renew Visas," Ha'aretz, March 27, 2014. [Hebrew]

As Cato the Elder said, there is no escape from the obvious solution: Enacting a series of primary legislation regulating the status and rights of asylum seekers, recognized refugees, and failed asylum seekers who cannot be deported and therefore should be given "subsidiary protection." This legislative reform can be incorporated into a new comprehensive immigration act (e.g., the legislative proposal that I examined in an earlier article)Reuven (Ruvi) Ziegler, "The Immigration Bill: An Examination of Arrangements Related to Asylum Seekers and Refugees," The Israel Democracy Institute, January 18, 2011 [Hebrew] or in legislation dedicated specifically to this issue. In the meantime, it is hoped that the Supreme Court will overturn Amendment No. 4 just as it invalidated its predecessor.