In an op-ed in Haaretz published after Ehud Olmert was sentenced to six years in prison for his role in the Holyland affair, Prof. Mordechai Kremnitzer explores the implications of the Holyland case for the battle against corruption in Israel. 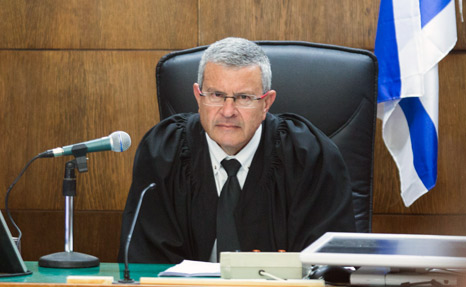 The sentence handed down in the Holyland case raises general questions about the battle against corruption. What is necessary in order for this fight to succeed?

First and foremost, a fundamental change is needed in the public's attitude toward crimes of corruption. The public—influenced by various journalists and commentators—does not view crimes of corruption as offenses that taint their perpetrators with moral turpitude.  It does not regard those guilty of corruption as criminals in the full sense of the term. They are seen as people who have stumbled, but are still considered esteemed and distinguished. A person (Aryeh Deri) can be convicted of the crime of accepting bribery and—after serving his sentence and waiting out the cooling-off period required by law—can return as the leader of a political party and head of its Knesset faction and receive the public's trust. A person (Ehud Olmert) can be convicted of the serious crime of breach of trust, but this conviction does not diminish his public and social standing one bit, after it is portrayed, falsely, in the media as an administrative or technical offense. Despite the fact that the social damage caused by a bribe taker is much greater than the damage caused by a thief or even someone who burglarizes a business, a real criminal stigma is only attached to the latter. As long as this is the public perception, the fight against corruption is doomed to fail. This is a watershed, with success in the fight against corruption on one side, and failure on the other.

From this perspective, Judge David Rozen took an important step in harshly condemning the criminals in the Holyland case and expressing disgust and revulsion at their actions. One may argue about specific choices of expression that he made, but the message of denunciation and the imposition of turpitude found in his ruling are justified and welcome.

In this respect, the sentence did not go far enough. It continued along a path of ambiguity, heaping lavish praise of the convicted criminals for their contributions in their public careers, while at the same time condemning the criminal actions they committed. This double message does not enable unequivocal social denunciation. It invites us to regard the convicted person as "an exemplary public official who contributed greatly to the state and who transgressed by taking a bribe," thereby allowing us to focus on either the first part of the sentence or the second. The truth is that this is an oxymoron, like "hot snow." Someone who accepts a bribe cannot be an exemplary public official. His contribution to the state does not remain intact. His acceptance of the bribe diminishes all of his good work and casts a dark shadow over it. Citizens cannot verify that their elected officials and public servants only take into account relevant considerations when making decisions and always keep the public's best interests in mind. All that can be done is to ensure that those who win the public's trust act with clean hands and a pure heart. A public official who takes a bribe strips himself of this ability. Accepting bribery is a fundamental and decisive violation of the most basic duty to act as faithful trustees of the public. It undermines the contract between the people and the government. The magnitude of this failure requires us to regard it as an action that immediately causes its perpetrator to give up his world.

The severity of punishment meted out by the court should also be seen in this spirit—especially the punishment of those people who took bribes or acted as middlemen for the bribes.  It is difficult to convince the public in words alone. The message about the anti-social, reprehensible, and destructive nature of taking bribes can only be communicated and absorbed when the legal condemnation is accompanied by severe punishment. Therefore, severe punishment has primary importance in fostering social awareness that rejects corruption—an awareness that is vital for the success of the fight against corruption.

When a citizen need of services of a corrupt government system that is "rotten from top to bottom" and that can only be moved into action by corrupt methods, as the verdict indicates that project developer Hillel Cherney believed, it signals the bankruptcy of the public system. In this situation, some people—and not just a few—will pursue the path of bribery. The battle against government corruption must be pro-active. The citizenry knows full well where there are bottlenecks in the public system that can only be bypassed by the use of payoffs and "machers"—fixers who are hired to cut through bureaucracy.  The law enforcement authorities should call upon the public to make its voice heard, to point to the places where corruption thrives. Agents of law enforcement must eradicate this cancerous affliction. At the same time, efficiency measures must be implemented to remove bureaucratic delays in order to "unclog" the "blockages" in the pipes in which the scourge of corruption has spread.

There is no alternative to using state witnesses, and even stoolpigeons, in order to combat crimes of bribery. Therefore, this practice should be given legal and public legitimacy when used with the requisite caution and responsibility. The delegitimization of such use is intended, in part, to benefit corrupt people and serve their illegitimate interests. In terms of deterrence, the testimony of witnesses such as the "macher" Shmuel Dechner and Olmert's former aide Shula Zaken is invaluable. In a reality in which senior partners in crooked systems turn against their partners, the relations between participants in bribery conspiracies will lack the required foundation of trust. Without trust, the bribery business will not exist.

The Holyland case is an achievement in the fight against corruption. But we must not assume that the battle has now been won. We must continue to wage this fight with persistence and determination.

A Hebrew version of this article was published in Haaretz on May 17, 2014.