Although the presidential race is heating up, the public does not seem to be particularly interested in it. What do Israeli citizens know about the race? Who is their candidate of choice? Find out in this mini-survey by the Guttman Center for Surveys.

The candidate who was found to have the most support among respondents who mentioned relevant candidates for the presidency is former Speaker of the Knesset Reuven Rivlin with 18% support. He was followed by Prof. Dan Shechtman with 9% support, MK Binyamin Ben-Eliezer with 6% support, Minister Silvan Shalom with 5% support, former Speaker of the Knesset Dalia Itzik with 3%support, Former Supreme Court Justice Dalia Dorner with 2% support, and MK Meir Sheetrit with 0.1% support. An additional 6% cited people who are not running for president in 2014. (These included Shimon Peres, David Levy, Speaker of the Knesset Yoel Yuli Edelstein, Benjamin Netanyahu, Avigdor Liberman, Uzi Landau, Amir Peretz, Natan Sharansky, Yair Lapid, Yuval Steinitz, and Uriel Reichman.) Here too significant differences were found in the responses of Arab and Jewish respondents. Benjamin Ben-Eliezer was found to be the leading candidate among Arabs with 9% support, while Reuven Rivlin enjoys 22% support among Jews.

Who is best suited to be the
next President of the State of Israel? 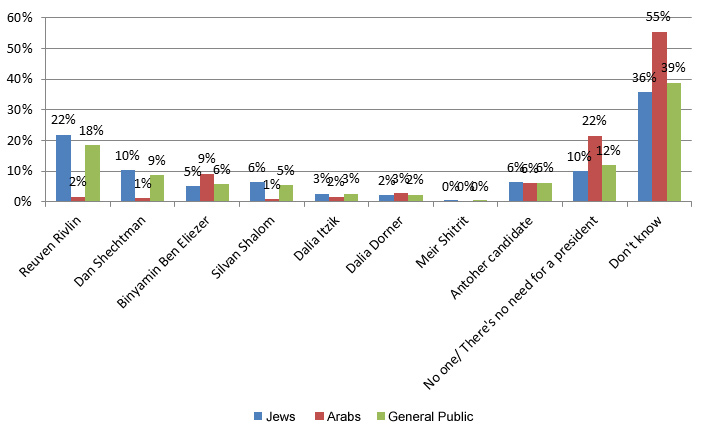 Support for Candidates by Party Affiliation?

Interestingly, a segmentation of support for candidates by the party affiliation of respondents (based on the respondent's vote in the 2013 Knesset election) found that support for the leading candidate, Reuven Rivlin, was lower among voters from his own party, Likud-Beytenu (18%), than among voters for all other parties except for the Arab parties, and was similar to his support among Meretz voters (15%). In general, Rivlin won support from voters for all political parties, except for Arab voters. In contrast, the majority of support for Prof. Dan Shechtman comes from voters for centrist and leftist parties, although he enjoys support of United Torah Judaism voters as well. Among voters of the Labor party, Binyamin Ben-Eliezer, the Labor candidate, is not the leading candidate and enjoys only 13% support. He is, however, the leading candidate among Arab voters.

Who is best suited to be the
next President of the State of Israel?
(Segmented by voting in the 2013 elections)

Note: It is important to note that there were additional answers that have not been entered into this table, primarily the names of other people who received very low support among respondents. For this reason, the data in the table do not add up to 100%.

Compared to an IDI Mini Survey conducted in February 2014, the rate of respondents who answered "don't know" surprisingly doubled (from 18% to 37%), while support for the candidates with the highest levels of support has decreased (support for Rivlin dropped from 23% in February to 18% in March, while support for Shechtman dropped from 18% to 9%).It should be noted nonetheless that in the previous survey, an earlier question asked respondents to list the names of up to four presidential candidates that they knew. It is reasonable to assume that this question jogged their memory and therefore made them more likely to provide the name of a candidate in response to the question "Who do you think is best suited to be the next president of Israel?" than to say "I don't know." 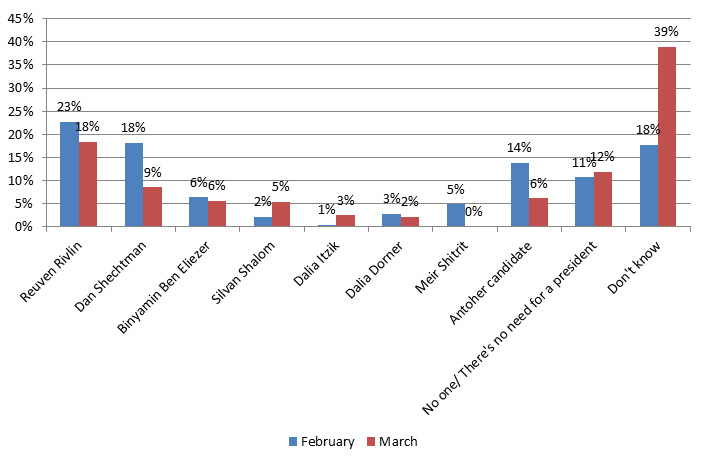 The Procedures for Presidential Elections

The majority of the public (54%) believes that the practice in which an aspiring candidate must obtain the endorsements of 10 Knesset members in order to become a candidate for president should be continued. However, in contrast to the current situation, an overwhelming majority (73%) of the public agrees with the proposal that candidates for president should be reviewed by a special committee before their candidacy is approved, similar to the committee that examines candidates before they are appointment to senior positions in the civil service such as Chief of Staff or Governor of the Bank of Israel (the Turkel Committee).