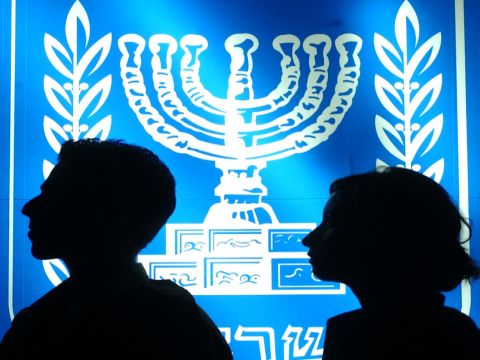 Two founding documents were unanimously accepted by the leadership of the State of Israel: one, when Israel declared its independence, and another, when the first elected government was established.
Israel's Declaration of Independence affirms the following:

The State of Israel will be open for Jewish immigration and for the Ingathering of the Exiles; it will foster the development of the country for the benefit of all its inhabitants; it will be based on freedom, justice and peace as envisaged by the prophets of Israel; it will ensure complete equality of social and political rights to all its inhabitants irrespective of religion, race or sex; it will guarantee freedom of religion, conscience, language, education and culture; it will safeguard the Holy Places of all religions; and it will be faithful to the principles of the Charter of the United Nations.

On that wondrous and stirring day, Israel was established as a democratic state ensuring full equality of social and political rights to all its inhabitants without regard to religion, race, or gender. All of this was contained in the Declaration of the Establishment of the State of Israel—a declaration that was the founding document of the nascent state and of the nation that fought for its freedom and sovereignty.

The second founding document, which is no less important, consists of the Basic Guidelines of the first elected government of Israel, which were brought before the Knesset on March 8, 1949 and approved unanimously on March 11. That government was a coalition that included Mapai [the worker's party that later became the Labor party] and all four religious parties: Agudat Yisrael, Po'alei Agudat Yisrael, Mizrahi, and Hapo'el Hamizrahi.

With regard to policy, the second section of the Basic Guidelines states as follows:

Freedom, Equality, and Democracy: In the law that will serve as the foundation of the democratic, republican government of the State of Israel, full equality of rights and obligation will be guaranteed to all citizens, irrespective of religion, race, or nationality; freedom of religion, conscience, language, education, and culture will be guaranteed; full and complete equality for women will be maintained—equality of rights and of obligations in the life of the state, society, and economy, and the entire legal system . Freedom of assembly and freedom of oral and written expression will be upheld, while safeguarding the security of the state, its freedom, and independence, and based on respect for the rights of others. In all state institutions, municipalities, and other elected bodies, full and equal electoral rights will be maintained, without regard to sex, religion, race, or nationality, and without any monetary qualification. The State will supply the public religious needs of its inhabitants, but will refrain from involvement in religious affairs. The Jewish Sabbath and festivals will be the established days of rest in the State of Israel; non-Jews will have the right to days of rest on their Sabbath and holidays.

Despite the fact that the State of Israel does not yet have a constitution, the Declaration of Independence and the Basic Guidelines of the first elected government are two founding documents, and they attest to the lofty and beneficent spirit that existed in the early days of the state. At that time, there was no prime minister who proclaimed that "the people of Israel" does not exist and that there is only "the Jewish people"—who grew and swelled in the Diaspora, whose language is not Hebrew, and who have no real stake in the building of the Land. Prime Minister Binyamin Netanyahu's declaration that there is "no people of Israel," to my ears, sounds like slander. This is simply because in every prayer book, including those of Rosh Hashanah and Yom Kippur, the word "Jew" or "Jews" does not exist! There is one constant plea to God: "And you shall welcome the return of Your people, the children of Israel."

From Israeli to Jew

In 1992, our elected officials adopted the Basic Law: Human Dignity and Liberty,  which transformed us from Israelis into "Jews" and determined that we are a "Jewish and democratic state." While I succeeded in adding an opening section  to this "Jewish and democratic state" law, a section  that cites the content of the Declaration of Independence and establishes that the rights of individuals in Israel will be upheld in the spirit of the principles of that declaration, in the years since the Basic Laws of 1992 were enacted, more Jewish content has been infused into the state, while its democratic aspect has been overshadowed. Legislative initiatives such as the demand for a "declaration of loyalty" to the state, as well as legislation that denies non-Jewish citizens of Israel rights to land and the right to reside in Jewish communities, do not attest to a democratic character; rather, they reflect processes of apartheid and racism that are utterly inconsistent with the declarations of "full equality...[for] all its citizens" in the formative documents of the State.

Shulamit Aloni is a former Knesset member from the Mapai, Ratz, and Meretz parties, and a former Cabinet minister. She is a recipient of the 2000 Israel Prize for Lifetime Achievement and Special Contribution to Society and the State.