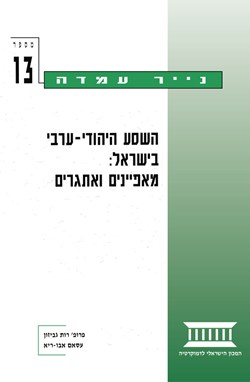 The Jewish-Arab Rift in Israel: Characteristics and Challenges

This policy paper maps central issues splitting the Jewish and Arab citizens of the State of Israel to provide background for enlightened discourse on the Jewish-Arab rift in Israel.

This policy paper identifies and charts the central issues splitting the Jewish and Arab citizens of the State of Israel so that the map can serve as background for enlightened discourse on a suitable way to deal with the Jewish-Arab rift in Israel. It includes information on Israeli Arab demographics, and discusses Israel as a Jewish and democratic state, the relationship between the state and its Arab citizens, and the different types of discrimination that Israeli Arabs face.

In 1998, two events occurred that symbolize the depth of the chasm between the State and its Jewish citizens on the one hand and the Arab citizens of Israel on the other. The entire year of 1998, and especially on May 15, 1998, the Jewish citizens of Israel celebrated the fiftieth anniversary of the founding of the state, of Jewish independence and the fulfillment of the Zionist dream. The Arab citizens of the state, on the other hand, commemorated fifty years of the Naqba.

"The Naqba" is the name given to the demographic dissolution and the political and socio-economic catastrophe that engulfed the Palestinians as a result of the 1948 war and the establishment of the State of Israel.

The second event, which has already been named "Black Sunday," was the violent confrontation between Israeli security forces and thousands of residents of Umm El Fahm in September, 1998, which took place subsequent to the army's decision to "close" a parcel of land that belongs for the most part to residents of Umm El Fahm and to turn it into a firing range.

The two abovementioned events, which are not unrelated, demonstrate the intensity of the Jewish-Arab breach fifty years after the establishment of the State of Israel. Indeed, many investigators of Israeli society count it among the rifts most threatening to the stability of Israeli society and politics. Despite this, the Jewish-Arab rift does not occupy a central position in Israel public discourse and thought. While the social mobility and political activism of Arab citizens in recent years on one hand and the increasing internal Jewish polarization re the peace process
and the Oslo agreements on the other have brought the Jewish Arab rift into sharper definition, it is still less prominent than the internal Jewish splits such as religious vs secular, left vs right, Ashkenazi vs Oriental, etc. The increasing radicalization of the struggle of Arab citizens for equal rights on one hand and the increasing importance of "the Arab vote" in parliamentary elections on the other, together with significant trends in Israeli thought and research concerning the history of the conflict, have created two opposing reactions among segments of the Jewish public.

The aim of this paper is mainly theoretical: identification and charting of the central issues splitting the Jewish and Arab citizens of the state so that the map can serve as background for enlightened discourse on a suitable way to deal with the Jewish-Arab rift in Israel. The characteristics of the current conflict can, in our opinion, be divided into two main, yet related, groups:

In recent years, much important work has been done on the relations between Jews and Arabs in Israel, and this paper could not have been written without relying on it and its findings. As mentioned, our aim here is not to take a stance on the many important questions at hand, but to provide a framework of up-to-date analysis and review of the political and ideological issues underlying the conflict between the two sides through supplying current, centralized comparative data on the socio-economic gaps between Jews and Arabs from the founding of the state until today.