The article below presents findings on Israeli secularism that are largely based on an in-depth study of religious behavior in Israel conducted by the Guttman Center and the Avichai Foundation and show that a vast majority of secular Jews observe certain aspects of Jewish tradition.

The findings presented in this article are mainly from an in-depth study of religious behavior in Israel presented by the Guttman Center and the Avichai Foundation. The past two decades show a fairly stable partition of Israeli society into three groups: 50% self-define as secular, 30% as traditional and 20% as religious or ultra-orthodox. A vast majority of secular Jews observe certain aspects of Jewish tradition, which explains the tendency of most secular Jews to report that they are somewhat observant. Perhaps it is the balance created by the high birth rate of religious groups and the large secular immigration from the FSU, which maintains a relatively static segmentation of Israeli society.

According to the 2008 Democracy Index (poll conducted in the second half of January) 51% of Israeli Jews define themselves as secular, and 19% as religious or ultra-Orthodox (see chart 1). According to the data collected by the Central Bureau of Statistics (CBS) in 2007, which measured the religiousness of the Israeli public according to five possible categories, 7% of Israelis define themselves as "ultra-Orthodox", 10% as "religious", 14% as "traditional religious", 25% as "traditional non-religious", and 44% as "non-religious / secular" (see chart 2) According to a CBS press-release June 12th 2007.. A breakdown of the data collected by the Guttman Center has offered a very similar picture to the one presented by the CBS. The few discrepancies can be explained by slightly different scales (four categories as opposed to five). 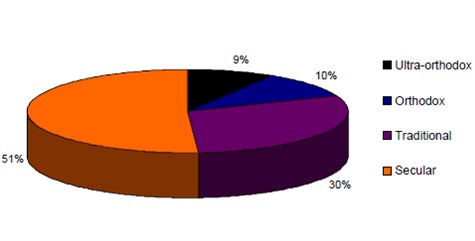 It seems that younger Israeli Jews are generally more traditional and religious than the older population (see chart 4). This finding can be explained by higher birth rates among the religious and traditional Jews in Israel.

In addition to the standard self-definition (as ultra-Orthodox, Religious, Traditional or Secular), it is common in Israeli polls to ask the participants to rate the level of their religious observance. According to the 2008 Democracy Index 13% of Israelis are fully observant, 22% are very observant, 48% are somewhat observant and 17% non-observant (see chart 5).

The data collected show that a significant portion of secular Jews in Israel report that they are religiously observant to some extant. According to the 2008 Democracy Index only 32% of secular Jews are non-observant (see chart 6). An in-depth study of religious behavior in Israel, conducted in the year 2000 as a co-operation between the Guttman Center and the Avichai Foundation, shows that a vast majority of secular Jews observe certain aspects of Jewish tradition (eat kosher food, refrain from driving on Shabbat, fast on Yom-Kippur, do not eat Chametz on Pesach, light Chanukah candles etc.), which explains the tendency of most secular Jews to report that they are somewhat observantShlomit Levy, Hanna Levinsohn and Elihu Katz, February 2002. A Portrait of Israeli Jewry: Beliefs, Observances, and Values among Israeli Jews [Hebrew] Jerusalem: IDI.. According to the 2008 survey, only a third of immigrants from the FSU report non-observance. 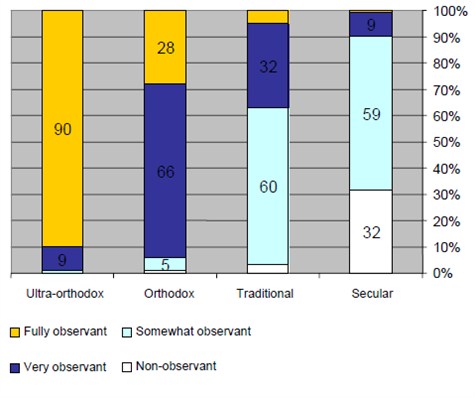 When the answers to the two questions are united in one chart (as was done in the joint study with the Avi-Chai Foundation mentioned above), it is evident that the situation has remained stable over the years, and the most common category (approximately one-third of all Israeli Jews) is comprised of those who define themselves as somewhat-observant secular Jews (see chart 7).

According to the Guttman Center data, there has been an increase in the rate of secular Jews since the early 1990s. The reason is probably the immigration from the FSU, which consists mainly of secular JewsThe analysis is based on two surveys conducted by the Guttman Center and the Avichai Foundation in the years 1991 and 1999, and on the Democracy Index of 2008. The findings from the early 1990s are based on a survey conducted by the Avichai Foundation in August 1990.. 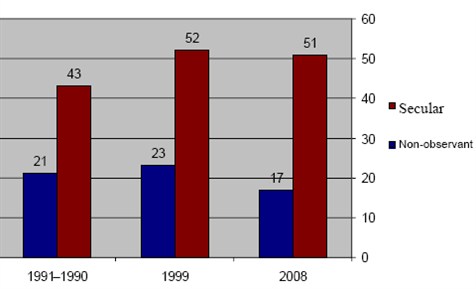