A Master Plan for Ultra-Orthodox Employment in Israel

IDI’s Master Plan for Ultra-Orthodox Employment in Israel presents policy recommendations for integrating Israel’s ultra-Orthodox (Haredi) population into well-paying employment and facilitating a continued rise in employment rates in this sector. This plan was devised as a result of extensive research conducted by IDI in cooperation with the National Economic Council of the Prime Minister's Office, under the leadership of IDI's Doron Cohen, former Director General of the Finance Ministry, and Prof. Eugene Kandel, Chairman of the National Economic Council. A brief summary of the plan can be found below.

In formulating IDI’s Master Plan for Ultra-Orthodox Employment in Israel, the members of IDI's research team surveyed the existing situation and policies, identified barriers to change, analyzed opportunities that can promote change, and proposed a series of operational policy recommendations that can be implemented by the government. As part of the research process, they conducted roundtable meetings with representatives of the Ministry of Finance, the Ministry of the Economy, the Education Ministry, the Prime Minister’s Office, the Council for Higher Education, and the Bank of Israel. These sessions contributed greatly to the ability to understand the issue thoroughly, devise multiyear objectives, and analyze tools that can be used to attain these objectives.

The result of this process was a comprehensive plan that includes the following:

Ultra-Orthodox Jews accounted for 11% of the population of Israel in 2014, and this figure is expected to rise to 18% by 2034. The consistent demographic growth of this sector has economic ramifications both for its members and for the country as a whole. Consequently, ultra-Orthodox employment has become a key issue in Israeli public discourse and policymaking over the last decade.

As a result of the low employment rate and low income that characterizes this sector, most ultra-Orthodox households are below the poverty line. Given the consistent growth of this community, ultra-Orthodox poverty has macro effects on tax revenues, benefit payments, consumption, and GDP.

IDI’s Master Plan for Ultra-Orthodox Employment in Israel recommends that the State of Israel revise its employment policy for the ultra-Orthodox sector for the coming decade, shifting its focus to include the objective of increasing employment in fields that offer higher-paying jobs, rather than focusing only on integrating ultra-Orthodox Jews in the workforce and increasing their rate of employment. This change would ensure that entering the work force will actually enable ultra-Orthodox Israelis to earn a decent wage and live comfortably. In addition, it would contribute to increased productivity and a more equitable distribution of the tax burden, which would benefit Israel's economy and society as a whole.

In 2010, the Israeli government set 63% as the desired rate of employment for ultra-Orthodox men and women by the year 2020. IDI's master plan recommends revising the objectives for the next decade (until 2025) to go beyond employment rates and to include reference to fields of employment and increased wages. We recommend the following targets for increasing participation in the labor force, weekly hours worked, occupational diversity, and wages earned:

Diversifying fields of employment, an increase in work hours, and higher hourly wages would have a positive effect on three levels:

In order to increase productivithy within the ultra-Orthodox community, policy makers must overcome a number of hurdles and take advantage of several opportunities.

Barriers to employment in the ultra-Orthodox sector include:

Opportunities that could be utilized include:

We recommend three growth engines that can increase income levels, encourage longer work hours, and improve the ability of ultra-Orthodox employees to receive promotions. These include expanding occupational training and academic programs, improving vocational counseling services, and increasing the willingness of employers to hire ultra-Orthodox workers.

A. Quality Training for the Workplace

B. Improved Vocational Counseling and Training

The vocational counseling currently provided by the government-sponsored employment development centers for the ultra-Orthodox sees entry to the workforce itself as the goal, without considering the position's salary. College and university programs for the ultra-Orthodox do not emphasize job placement, which makes it difficult for graduates to find work. The current study also found that ultra-Orthodox employees who do manage to break through the glass ceiling into better-paying jobs encounter cultural barriers in their new workplace.

The following steps are recommended in order to shift the focus away from vocational counseling and training alone and towards better-paying employment:

The following measures will promote better-paying employment for the ultra-Orthodox, particularly in the business sector:

Integrating Israel's ultra-Orthodox Jews into the upper rungs of the labor market is a national priority that poses a challenge for policymakers and for Israeli society as a whole. Despite the impressive success in getting the ultra-Orthodox to enter the labor market and increasing employment rates among ultra-Orthodox men and women in recent years, current policies have not been able to extricate the sector from its deep poverty. The salaries of ultra-Orthodox workers remain low and do not provide real economic and social security.

Setting objectives for better-paying employment and pursuing these goals by implementing the full set of recommendations presented above could increase the labor productivity and wages of Israel's ultra-Orthodox workers. This new chapter in the integration of the ultra-Orthodox into the Israeli economy would benefit the ultra-Orthodox community, Israel's economy, and Israeli society as a whole. 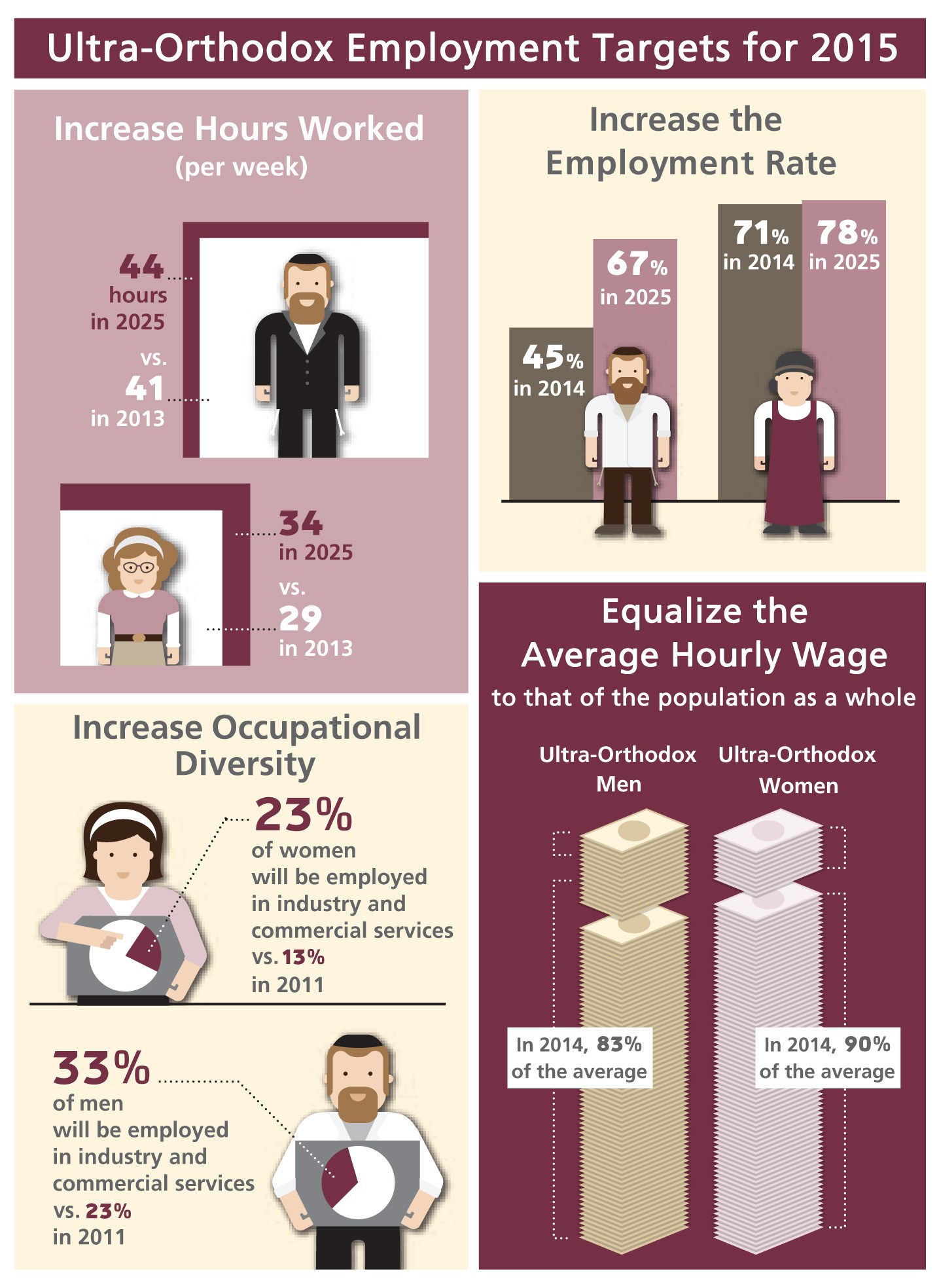