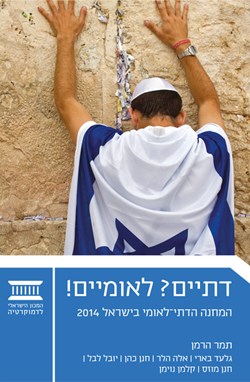 The National-Religious Sector in Israel 2014 (Hebrew)

In recent years, the position of the National Religious camp within Israeli society has shifted: its demographic share of the general population has increased (especially among the younger age groups) and it has become more prominent in social and political discourse. These changes have been influenced by changes in secular society in Israel, especially the growing desire to reconnect to Jewish roots and the decline of ideological secularism. These processes present new opportunities for cross-sectoral collaboration.

Alongside these changes and new possibilities, however, many people—both in Israeli society as a whole and within the National Religious camp in particular—feel that the ground beneath them is shifting and that Israeli society is entering a new phase, for better or for worse. First, the boundaries of the National Religious camp are no longer entirely clear, since our findings suggest that it extends well beyond the people who identify themselves as "religious" in surveys. Second, it is not entirely clear what effect the attitudes found in this camp—extreme right-wing positions on political and security issues, limited trust in democratic institutions, low willingness to compromise on religious issues, and a strong emphasis on the Jewish national character of the State—will have on Israeli democracy. Third, the future of this camp is unclear: Is it about to experience a major blow-up or will its split into multiple subgroups with divergent positions on major issues and its absorption of new groups allow it to remain united?

This study by IDI's Guttman Center for Surveys focuses on the National Religious camp in Israel and probes this new reality. Questions explored include: Is the National Religious camp a discrete sociological category that is clearly defined and has distinct positions? To what extent does this camp have a uniformity of beliefs and attitudes? If this camp is heterogeneous, what are its subgroups and what are their relative sizes and unique characteristics? What are the relative prevalence, distribution, and magnitude of the political, social, and cultural views of members of this sector regarding core issues of the Israeli social and political discourse?