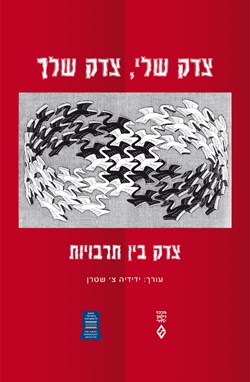 My Justice, Your Justice

Edited by IDI Vice President Prof. Yedidia Z. Stern, My Justice, Your Justice is an anthology that explores perceptions of justice in different societies, cultures, and points in  time. It includes content from disciplines including history, philosophy, Jewish thought, law, literature, culture, and sociology.

Edited by IDI Vice President Prof. Yedidia Z. Stern, My Justice, Your Justice is an anthology that explores perceptions of justice in different societies, cultures, and points in  time.

The articles in this volume, which were written by leading Israeli academicians, present the reader with content from a wide range of disciplines including history, philosophy, Jewish thought, law, literature, culture, and sociology. Exposing readers to complex and critical discourse regarding the nature of perceptions of justice in different places and times, the articles in this book are organized in the following six sections:

My Justice, Your Justice is a joint publication of the Israel Democracy Institute and the Zalman Shazar Center.

Perceptions of Justice in Different Cultures

"Justice" is a tricky term. People in different cultures and throughout history have debated it endlessly. Who is supposed to apply the principles of justice - the individual, the group, the state or all of humanity? To whom do these principles pertain - people, animals, legal entities? What is the relationship between the concept of justice and concepts such as truth, morality, kindness, compassion and law? While justice is carried out, must it be balanced against other values? Perhaps justice should be pursued for its own sake, unconditionally, as the Romans said, Fiat iustitia, pereat mundus ("Let there be justice, though the world perish")? And on an entirely different plane, where can justice be achieved - in day-to-day worldly affairs or in the realm of the teleological-metaphysical, which lies beyond our grasp?

Some maintain that justice is objective and can be analyzed scientifically; that the "correct" theory can produce a fixed definition. Others consider it subjective and personal, entirely dependent on the observer's vantage point. On one hand, there are theories of justice that approach the concept epistemologically and challenge us to search for principles that codify the discourse on justice in an effort to map out the field according to analytical doctrines (e.g. corrective justice, distributive justice, social justice, procedural justice or restorative justice). On the other hand, justice can be perceived as a nebulous concept, a broad receptacle with room to accommodate opinions and stances that may not be concrete. This perspective views the discourse on justice as a series of endless articulations of human intuition at certain times and in certain places, without any unifying theory or criteria for assessment and critique.

The former view holds that the proper elucidation and regular updating of the criteria for determining justice enables us to decide among various values, distribute resources and right wrongs; the latter considers justice to be a wide open field lacking any dimension of fixed objectivity, and as such justice, in and of itself, is unable to serve as a gauge for reaching decisions in the public sphere.

Whatever one's stand on the a priori nature of the concept of justice may be (fact or value, truth or ideology, principle or creed, substance or instrument), it is clear that in practice the way people and societies relate to the existence of justice, or the lack thereof (i.e. their perception of justice),depends upon their identity. This book addresses the underlying relationship between the praxis of justice and the social-cultural moment in which it exists.

Different cultures develop varying perceptions of justice. In a democratic society the law of the state generally articulates the prevailing perception. However, in addition to the state, there are other sources - sources within the state, as well as external to the state - that formulate a society's view of justice. For example, the variety of communities within the State of Israel- the religious community, the Arab community, the feminist community, or the Mizrahi community - often adopt particular perceptions of justice decidedly different from the one articulated by the state's justice system.

Outside of the state, international and multinational organizations introduce additional concepts of justice, which become important when the state deals with international law and other related realms. These three possibilities - community justice, state justice and international justice - are a brief preview of the possible perceptions of justice.

Differing perceptions of justice stem from the fact that people differ from one another in terms of the contents of the meta-narratives to which they ascribe: the religious narrative, the rationalist narrative, a narrative of freedom or a narrative of efficiency, to name only a few. Each of us has a unique set of preferred values and personal beliefs. As such, our understanding and evaluation of the "reality" surrounding us is not an objective matter upon which everyone can agree. Therefore, it is obvious that no two people will have identical concepts of "justice."

This book does not systematically cover all the issues related to perceptions of justice in different cultures. Rather, we have compiled original articles from different fields dealing with a range of angles on the topic. The writers present us with a broad spectrum of knowledge - history, philosophy, Jewish thought, culture, law, literature and sociology. Despite the range of disciplines, an effort has been made to curb the use of the jargon of these specific fields in the discussions so that all parts of the book are accessible to educated readers. The book progresses from a discussion of the Israeli perception of justice to a broader discussion of the Jewish concept of justice, eventually arriving at the general comprehension of justice, which is not situated in the "here" or "now" or with "us" specifically. For ease of reading, the book is divided into six sections: Justice in Judaism - A Historical Review; Justice, Humanity and Society; Justice and Law; the Boundaries of Justice; Justice and Literature; and Justice and Globalization.

The number of topics and the interrelation of the articles in the book point to the text's broad ramifications for the discussion of perceptions of justice in different cultures. Astute readers can draw information and insights from each of the important topics presented in the upcoming pages, but more importantly, attuned readers will emerge from the reading of this book with a more critical and multifaceted understanding of their own perceptions of justice.

Part 3: Justice and the Law

Part 4: The Limits of Justice