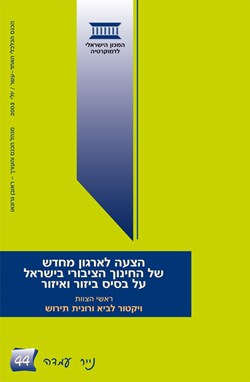 The following is a summary of a Hebrew proposal that was prepared by the team that researched the pre-academic education system in Israel in preparation for the 11th Caesarea Economic Policy Planning Forum in 2003. The proposal offers ways to reform Israel's education system, at a time when it was undergoing an accelerated process of financial, curricular, and ideological decentralization.

The goal of this document is to propose a new structure for the public education system in the State of Israel, so as to raise the level and quality of education. In recent years, both policy-makers at the Ministry of Education and the public have been dissatisfied with the achievements of the education system. In addition to this sense of dissatisfaction, for more than a decade the education system has been undergoing a rapid process of decentralization in the economic and ideological spheres, and in terms of subject matter.

The Education Ministry has taken an active part in the public discussion through committees it has appointed to examine issues related to the efficiency and quality of the education system, as well as through new educational initiatives and structural changes. These initiatives and changes are likely to yield positive results, but there are many who feel that change on a considerably wider scale is really what is wanted and needed by the education system.

What, then, is the tremendous change that will push the education system in the desired direction? Many countries throughout the world have struggled – and are struggling with – this question. Many of them have found the solution in the direction hinted at in the conclusion of the Ministry of Education’s “A New Era for Equal Education” program: decentralization of authority from the head office to the field, empowerment of schools to make them autonomous, and giving them authority and accountability through school-based management. Since the 1980s many countries around the world have implemented reforms based on a decentralization of the education system, that is, transferring decision-making and implementational authority, as well as accountability, from the center to the district and local school systems.

We can name at least nine goals that motivate such changes: greater educational quality; more efficient management and use of resources; transfer of budgetary-financial responsibility from the center to the local/geographical region; increasing local control by revoking regulations; introducing supply and demand mechanisms into the education system; increasing processes of economic development and modern institutions; encouraging and enhancing processes of democratization and neutralizing centers of power, such as teachers’ unions and political parties; promoting and addressing multi-cultural, ideological, religious and ethnic needs.

Proposals have been raised in the Israeli education system as well, in a similar direction towards decentralization and zoning, for example, in the Zanber Committee Report (1980). The proposal formulated by the present team is based to a large extent on the principles underlying the Zanber Committee Report, with additions and emphases that reflect the structure of the education system at this point in time. The concept behind such a model is decentralization of authority from the head office to the field, empowerment and autonomy, and delegating authority and accountability from the national level to the local level (and the school). In essence, this means moving the center of gravity for operating and managing educational services to the responsibility of the local level (in other words, a “local education administration”). It is important to note that this does not involve additional resources or establishing new bodies, rather, it means replanning the authority and responsibilities of existing bodies while relying on resources that are presently available.

The goals this proposal hopes to serve are:

It is important to mention once again that implementation of such a reform will be a continuation of a trend that already exists in the field, and will give this trend an official, legal dimension. The reform will be essentially structural, but it will also serve goals that are partly organizational (greater efficiency), ethical and pedagogic.

2. The Ministry of Education under the new model

The Ministry of Education serves as a head office under the new model being proposed for the education system in Israel. The Ministry’s present areas of implementation, such as school budgets, appointing teachers and principals, planning and budgeting for the construction of schools and classrooms – will be transferred to the responsibility of the local educational administration. On the other hand, Ministry activities will be increased and enhanced with regard to setting policy and planning, control, assessing and supervising the implementation of the rules and regulations regarding educational services.

In many countries that have already implemented a decentralization and zoning plan for education (such as Sweden, Canada, Belgium and England), a national education council was established, which is usually responsible for conducting public discourse on educational matters, and serves as an advisory panel for the educational administrations and the Education Ministry. The entire enterprise is backed by and rooted in legislation, distribution of authority is defined and arranged, and is transparent to the general public. We should consider, even at a later phase, including within the proposed plan the establishment of a national education council.

Organizational efficiency for the benefit of increased educational resources per pupil through the local education administration will be reflected in several aspects, primarily with regard to budgetary flexibility: freedom of action with regard to transfers among the different budget items, and the option of carrying over surpluses from one year to the next.

4. Increased independence for the school and the principal

A major thread in the concept of decentralization as described in this document is enhancing the independence and authority of the school and its principal. In order to realize independent and top quality management of the school, we must significantly expand the authorities of the school administration. Most of this expansion would come in the spheres relating to budget (teaching hour budget and shekel budget), teaching strength (authority to determine the faculty, to assess its work, to reward excellence through differential rewards) and regarding teaching methods and curriculum subject to the priorities and binding regulations determined from time to time by the Education Ministry and the local education administration.

5. Increased transparency of information in the education system

The entire change proposed in this document will be based on fundamental-structural legislation, which will adapt the main education laws to the new structures, both those proposed in this paper and those that already exist. Indeed, tremendous energies are presently wasted on conflicts that result from unclear definitions, duplication and contradiction between authority and accountability. This legislation will also help reassess the role and the definition of public education in Israel, and to differentiate between national goals that can be achieved only through supervision and centralized planning (such as integration, promoting and encouraging minorities, etc.), and local goals that can be identified and achieved only on the local level. Defining the local “level” must be done not only through demographics, but also on the basis of ethnic, ideological, religious and gender criteria.

To date it is obvious to everyone that the Achilles Heel of Israel’s education system is, in no small measure, the result of structural, organizational, economic and legal characteristics that have severely compromised the efficiency and effectiveness by which the system translates the resources it has at its disposal into educational and scholastic outcomes. The reform proposed in this paper is aimed at treating these structural failures: too much centralization, the distance between the community and the centers where decisions are made about its schools; the lack of accountability and transparency; lack of connection between authority and accountability; very limited authority and accountability given to the school principal; antiquated administrative structure of the schools; reward and salary systems that are devoid of any incentives, and more.

The obstacles that stand in the way of the proposed reform are not inconsequential. In order to prepare for them and face them, we must promote public discussion on this issue, add those elements that are still missing from the proposal, and translate its principles into detailed plans of action. As in the case of any great change, there will certainly be groups who will feel injured and will try to prevent or delay any action in the direction proposed. There may even be local authorities that will not be very excited to assume the responsibility and authority. These authorities will certainly be among those that should be included in an association of education authorities, but there are also larger authorities whose readiness for such a move is doubtful. We may have to examine the option of differential decentralization.