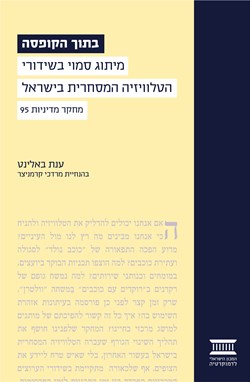 Although Israeli television channels ostensibly separate programming from commercials, Israeli television viewers are exposed to overt and covert commercial messages almost continuously, from the moment they turn on the TV. This phenomenon of "embedded advertising," which has emerged in Israeli commercial television over the past decade, is part of a global trend toward increased commercialization of media content, and is the subject of this study by Anat Balint.

This study by Anat Balint reveals the sweeping changes that have taken place in Israeli commercial television over the past decade, unbeknownst to viewers. Although Israeli television channels ostensibly make a clear division between the time that is allocated to programming and the time allocated to commercials, television programs are actually full of commercial messages—whether overt or covert—to which viewers are exposed almost continuously from the moment they turn on the TV. This phenomenon of "embedded advertising," also known as "branded content," is part of a global trend toward the increasing commercialization of media content.

Since the beginning of the twenty-first century, embedded branding has become one of Israeli commercial television’s most dominant and problematic features. The line between programs and commercials is becoming increasingly blurred as commercial messages are regularly integrated into programming in various ways, such as through the inclusion of paid interviewees and experts, creation of fictional characters in TV drama and comedy series in line with commercial campaigns, designing sets according to a brand’s look and feel, product placement, and more. Thus, while there is ostensibly a clear division between the time allocated to programming and the time allocated to commercials, in actual fact viewers are exposed to an almost constant stream of commercial messages, both overt and covert.

This phenomenon is symptomatic of the rise of a new sector of the media and advertising industries, commonly called “branded content.” The agents active in this sector negotiate commercial deals between advertisers, broadcasting bodies, and production companies, even though such transactions are essentially against the law in Israel (according to the Second Authority for Radio and Television Act for Broadcasters, and the Communications Act for Multi-channel Platforms). According to Anat Balint, the author of this research, the term “branded content” is an oxymoron intended to conceal the true nature of these activities and their public impact, and to prevent any further critical discussion of the topic. Consequently, Balint has chosen the term “embedded branding.”

Embedded branding practices emerge as part of a global trend toward the increasing commercialization of media content, and are a focus of concern for regulatory bodies throughout the world. Their emergence is linked to economic and technological changes that threaten the traditional model of commercial television, which is based on mass viewing and the airing of commercials.

Two trends have led to the development of embedded branding:

Loss of trust in the media’s ability to serve as a central arena for public discourse is the most severe of the harms resulting from embedded branding practices. Mistrust not only threatens the democratic climate but can also have a boomerang effect on the broadcasting bodies that nurture these practices, as the broadcasting bodies’ very existence depends primarily on the trust of viewers.