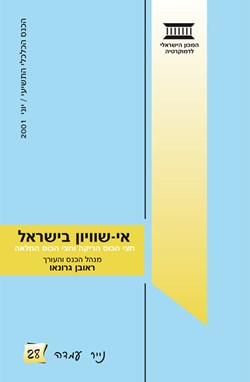 Are the economic gaps in Israeli society exceptional when compared to other western societies? And how can Israel cope with these gaps? This paper demonstrates that the attempt to minimize the economic gaps in Israel by establishing a support system and allowances have indeed gained success, but also cost a high price from the Israeli market, since this method weakened the incentive for households to advance on their own.

Are the economic gaps in Israeli society exceptional when compared to other western societies, and how can Israel cope with these gaps? Written for the 9th Caesarea Economic Policy Planning Forum in 2001, this study discusses how the attempt to minimize the economic gaps in Israel by establishing a support system and allowances have indeed gained success, but also exact a high toll from the Israeli market, since this method weakens the incentive for households to advance on their own. Furthermore, the authors investigate the question of Israeli economic mobility, and show how specific populations are able to enjoy it, while others remain static, captives in the circle of poverty. The authors' conclusions are that short term solutions for the issue of poverty are found in creating employment for heads of households and in encouraging such work, and that long term solutions lay in empowering professional skills of the weak population.

Education as a Primary Tool for Narrowing Gaps

The key to reducing the economic gap over the long term, in the view of most speakers, is proper investment in education. The impressive technological developments of the last few years have increased the practical value of education and widened the gap between those with more education and those with less. The participants related to the subject of gaps in the following ways:

A discussion was held on suggested steps toward easing university entrance requirements by eliminating the psychometric exam or lowering tuition, thus opening the door to higher education to those who would otherwise never be able to achieve one. A sweeping reduction in tuition was said to be unjust because it would help those with means to finance their studies at the expense of all taxpayers. It was mentioned that eliminating the psychometric exam would allow unqualified students to enter universities, thus lowering the academic level. A more effective solution would be to expose greater numbers of students from depressed areas to the idea of academic studies through a combination of affirmative action and scholarship programs. It was also mentioned that education is a clear example of inbuilt market failure: families of little means are not able to borrow the money required for high-quality education; children of these families, therefore, do not fulfill their potential. One function of the government is to intervene in order to allow every sector of the population to acquire a good education.

The State of Israel, it was claimed, can compel all educational institutions to use a basic curriculum that includes the subjects needed for students to function satisfactorily in the job market: mathematics, English, and computers. Ultra-Orthodox schools do not teach these subjects, and their graduates become dependent on society, rather than contributing to it.

A number of speakers mentioned specific projects that promote achievements by youth in depressed areas–earning a high school diploma, exposure to the world of higher education or hi-tech. They had strong praise for pinpointed, focused treatment administered over the course of several years, which has led to very positive results.