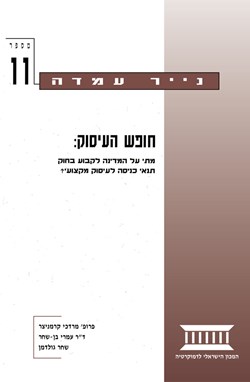 When Should the Government Regulate Entry into Professions?

This policy paper examines the grounds for regulating admission to professions: Should the state legislate licensing procedures for engaging in a particular occupation? What characteristics would determine the type of professions requiring such regulation?

The public involvement of the institutions of State Comptroller in democracies around the world is an important political and governmental phenomenon. A major example of this can be seen in European countries where in the last several decades great emphasis has been placed upon defining the breadth and avenues of activity of the State Comptrollers. An extraordinary effort has also been made within the framework of the European Community to design and define an all-European Comptroller that would become part of the overall effort to create supra-national or all-national governing frameworks.

The central reason for establishing comptroller institutions is the expansion and elaboration of the modern state as a regulatory welfare state beginning with the mid-nineteenth century, and especially since the mid-twentieth century.

The expansion of all spheres of the state's operations, driven in large part by urbanization and industrialization in response to economic, social and international crises, required the development of a professional Public Authority that would be trustworthy, efficient, complex and ramified, which would be the repository of extensive professional experience and knowledge.

Simultaneously, the Public Authority turned into the main conduit for concentrating and disbursing public funds, thus becoming a tremendous resource for politicians. An ambivalent relationship developed between elected representatives on one side and appointed officials on the other. The former views themselves as the guardians of public administration in general and public funds in particular because the voters had elected them. Their power and the basis of their legitimacy is drawn directly from the will of the voters, who could replace them if they do not function properly.

In contrast, the appointed officials consider their professional training, their apolitical approach, their considerable experience and their mastery of information and knowledge to be the source of their strength, their justification and in cases of dispute, the superiority of their reasoning over that of the politicians. In tandem with the structural conflict between the appointed officials and the elected representatives, the latter used the considerable resources of the Public Authority for the advancement of personal, political and special interests. The Authority was perceived as a means - often illegitimate - for consolidating and preserving the continuation of the regime. Phenomena such as corruption, monetary waste, inefficiency and ineffectiveness were some of the negative outcomes stemming from the complex relations between politics and the Public Authority.