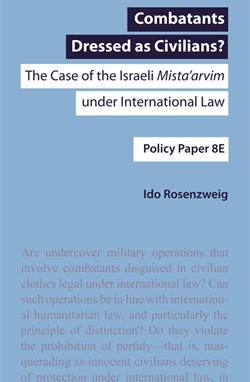 The Case of the Israeli Mista’arvim under International Law

An overview of the history of the <em>Mista’arvim</em>—elite units of Israeli soldiers disguised as local Arabs—that analyzes the legality and implications of the use of such undercover units for law enforcement and combat operations under international law.

This policy paper provides an overview of the history of the Israeli undercover units known as Mista’arvim—elite units of Israeli soldiers who operate in the West Bank and Gaza while disguised as local Arabs—and analyzes the legality and implications of the use of such units for law enforcement and combat operations under international law.

This policy paper asserts that undercover operations are not prohibited under international law per se, unless they violate principles of international law or constitute a war crime such as perfidy. In addition, it presents practical and operational conclusions and includes recommendations to guide Israel’s military forces in the deployment of undercover units.

1. The Requirement to Wear Uniforms

2. Perfidy and Treacherous Killing or Wounding

2.1. The Elements of Perfidy
2.2. Deployment Preceding an Attack
2.3. Failed Attempts
2.4. The Differences between Perfidy and Treachery
2.5. The Customary Nature of Perfidy
2.6. Application in Non-International Armed Conflict
2.7. Ruses of War
2.8. Application to Asymmetric Warfare
2.9. Conclusion

1. Classification of the Legal Framework

Military operations involving soldiers wearing civilian clothes have always been employed by state security and military forces. Records of undercover military activity date back at least to World War II and such activity continues until the present. In the Israeli context, these units are called Mista’arvim since they dress up like local Arabs when they operate in the West Bank and the Gaza Strip, usually for counter-terrorism purposes.

Though commonplace, the employment of undercover units raises difficult questions with regard to law and ethics. In the context of armed conflict in particular, the lawfulness of using undercover forces has been questioned, as it might be perceived to be a violation of the prohibition of perfidy or other forms of treachery tantamount to war crimes.

The principle of distinction is one of the core principles of IHL, and the requirement to operate while wearing a uniform or a distinctive sign is generally considered one of the fundamental criteria for attaining combatant status. However, after examining the relevant sources such as the Geneva Conventions and their additional protocols, we have concluded that the mere operation of combatants without uniforms does not violate IHL. Nevertheless, since that requirement is also one of the basic conditions for conferring POW status upon combatants, the failure to wear a distinctive sign while conducting a military attack could result in the loss of the right to POW status in international armed conflicts, and thus the loss of combatant immunity. Furthermore, while the lack of a distinctive sign does not constitute a violation of IHL per se, it could serve as an element of an IHL violation, such as perfidy or treachery.

The prohibition of perfidy and treachery is based on the existence of trust between adversaries in armed conflict, and a breach of such trust, by means of, inter alia, feigning the status of a protected person (such as an uninvolved civilian) in order to kill, wound or capture a person. The rationale for such prohibition rests on three main and fundamental notions: distinction, chivalry, and reciprocity.

After analyzing the prohibitions and their elements, we have reached the following conclusions:

In mixed situations of law-enforcement and combat operations, such as during belligerent occupation, both law-enforcement and combat operations can take place. As the applicable law is different in each context, the correct choice of applicable law is of the utmost importance. In certain situations, the military government conducts “law and order” operations (law enforcement)—military actions to deal with moderate levels of violence, which are more akin to the challenge posed by crime-suppression activity and are governed by international human rights law. In other violent contexts in which a nexus to an ongoing or new armed conflict can be established, the occupying power may engage in combat action, which is governed by IHL.

In law-enforcement actions there is no positive restriction on the use of undercover units. The only relevant requirement is to conduct operations in accordance with the law, and especially to ensure that the use of force (and especially lethal force) takes place only as a last resort and under appropriate circumstances.

In order to identify what operations would constitute law-enforcement operations, we need to examine the entire situation and take into account all of its characteristics, including:

It should be noted that these characteristics are not meant to serve as an exhaustive or cumulative list of conditions for the identification of an operation as either law-enforcement or combat action. Such examination can provide the military authorities with an ex ante understanding of the applicable legal framework.

Adv. Ido Rosenzweig, a former researcher at the Israel Democracy Institute, is co-founder and chairman of ALMA – The Association for the Promotion of International Humanitarian Law in Israel, and is the Director of Cyber, Belligerencies and Terrorism Research at the University of Haifa’s Minerva Center for the Rule of Law under Extreme Conditions.

Tags:
terrorism and democracy,
The Amnon Lipkin-Shahak Program on National Security and the Law