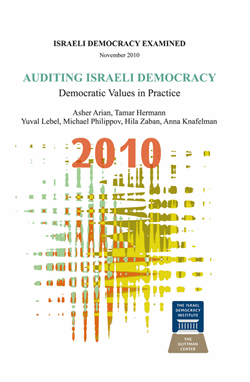 The 2010 Israeli Democracy Index was conducted on two planes: The vertical plane focused on comparing support for core democratic values with citizens’ assessment of the extent to which these values are realized by government institutions and agencies. The horizontal plane focused on relations between citizens, as individuals and as groups, and looked at whether the citizens of Israel in fact uphold their stated commitment to constitutional values and the rights derived from them.

On November 30, 2010, IDI President Dr. Arye Carmon presented the results of the 2010 Israeli Democracy Index to Israeli President Shimon Peres and the leadership of the three branches of government: MK Reuven Rivlin, Speaker of the Knesset; Justice Dorit Beinisch, President of the Israeli Supreme Court; and Minister of Justice, Prof. Yaakov Neeman, representing the executive branch. The annual Index measures the functioning and performance of Israeli democracy, as well as public perceptions of the State and its institutions, by utilizing public opinion surveys and a series of international indexes.

Entitled "Democratic Values in Practice," the 2010 Israeli Democracy Index examines the Israeli public's attitudes towards democratic values and democratic behavior. Topics addressed in the report include: Israel's ranking among the world's democracies, majority-minority relations, and the opinions of Israeli citizens concerning the state's fulfillment of its democratic mission.

In most international indices, Israel ranks immediately after the established democracies, near the new democracies of Eastern Europe, Central America, and South America.

The Public's Views of the Practice of Democracy in Israel

Equality in the Allocation of Resources

The Extent of Tolerance for Neighbors who are "Other"